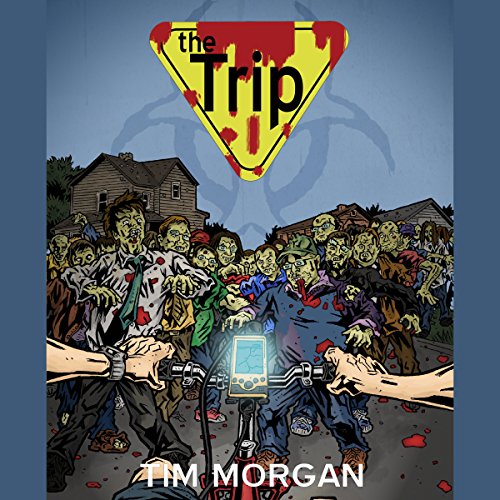 Meghan, Dave, and Chris have planned the trip of a lifetime: they're going to spend the summer after their senior year of high school on a bicycle trip across America. As they plan their trip, a previously unidentified flu virus is detected in Mumbai, India, and begins a relentless march across the globe.

As the three teens set out on their journey, details begin to emerge about the virus, which is not a simple flu virus; this virus turns its victims into flesh-eating zombies. And it's arrived on our doorstep. The three make a desperate bid to get home by riding through infected territory.

Can they survive The Trip?

Would you try another book from Tim Morgan and/or the narrators?

Probably not, couldn't finish it. Tim Morgan's story seemed fine, but the one of the narrators was too annoying to listen to. and the production quality is laughably bad.

Would you be willing to try another book from Tim Morgan? Why or why not?

Maybe... I wanted to finish "The Trip" but the ridiculous poor production made it impossible.

Not sure which one, but one of the narrators kept wetting her lips or throat and making a very distracting and annoying slurpy/squishy/moist sound between lines.

What character would you cut from The Trip?

Don't know, didn't make it a quarter of the way through even.

This is the worst audiobook I have ever listen too, The story sounded fine and I decided to try it purely based on the reviews of the paperback off of amazon. But the production for the audiobook is so poorly done, I found myself laughing at it more than listening to the actual story. I only made it to chapter 8 of 40 before I gave up on it.

- Issue one. Three narrators were used for this book. Each narrator voices the point of view of a different main character. Here is what I don't get... There are 2 Male leads and 1 female lead... yet they chose to have 3 Female narrators!?. sooo~ the male parts are read by woman... WHY? why not get male narrators? whats the point of having multiple narrators if your not even going to match up genders. And they dont even try to do a male voice, I kept having to tell myself "its a guy, its a guy, its a guy" For a good portion of this book I thought it was 2 female characters and one just so happen to have a manly name... I mean really, you might as well of just had one of them read the whole book.

- Issue two, One of the female narrators is not edited well, half the time between lines she makes these slurpy noises like shes wetting her lips or throat and its super distracting.And another one of them, stuttered on a few words and it wasn't re-done.

- Now, those first 2 issues were actually kinda forgivable and I coulda powered on past them and kept going if it wasn't for what are the biggest issues in this audiobook:EXTREMELY POOR PRODUCTION:
- Chapter 5 - 13:20, The next 4 minutes of the chapter is the last 4 minutes you just listened. Its funny because it had been so seamlessly added on that I didn't catch it until I was half way through the repeat and was like... wait a minute....
- Chapter 7 - 19:39 = The director interrupts the narrator and gives her some instructions and she repeats the last 30 seconds. LOL
- Chapter 7 - 22:23 = The director says "cut cut, ok were rolling" then the book continues. And I'm not even through a quarter of the book and these obvious defects just shows me how ZERO quality control was done on this title... I didn't even want to continue. I almost want to keep it as an example of bad production... but I rather get my credit back.