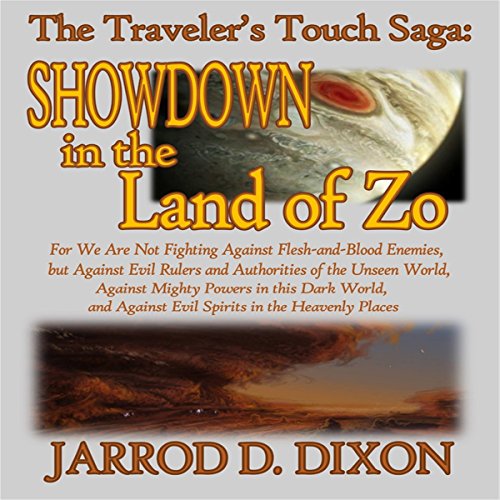 The Traveler's Touch: Showdown in the Land of Zo

By: Jarrod D Dixon
Narrated by: Gerald Zimmerman
Try for $0.00

Batman's nemesis is The Joker.

The Avenger's arch enemies are, well, all the rest of the bad guys whose mission in life is to terrorize the you-know-what out of humanity.

In Ephesians 6:12, the Bible says; "For we are not fighting against flesh-and-blood enemies, but against evil rulers and authorities of the unseen world, against mighty powers in this dark world, and against evil spirits in the heavenly places." (NLT - New Living Translation).

Thus, in this refreshingly hilarious yet surprisingly profound Inspirational chapbook, you, dear listener, are the main "hero" in this entertaining fictitious tale about the believer's "conflicts" with satanic opposition, which we sometimes find ourselves in a Showdown against, as we travel this marvelous maze of a Christian Journey.

If you liked Part 1 - The Greatest Touch, and if you loved Part 2 - Another World, then, my fellow traveler, prepare to be utterly wowed by an epic fantasy/adventure like you have never listened to before! Introducing, The Traveler's Touch Saga, Part 3 - Showdown in the Land of Zo.

"I don't think you ever stop giving. I really don't. I think it's an ongoing process. And it's not just about being able to write a check. It's being able to touch somebody's life." - Oprah Winfrey.

What listeners say about The Traveler's Touch: Showdown in the Land of Zo