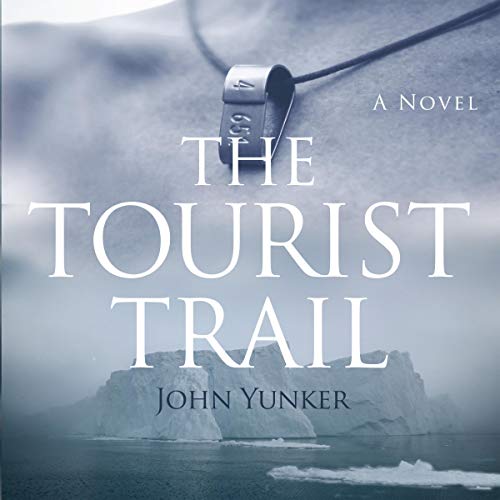 Biologist Angela Haynes is accustomed to dark, lonely nights as one of the few humans at a penguin research station in Patagonia. She has grown used to the cries of penguins before dawn, to meager supplies and housing, to spending most of her days in one of the most remote regions on earth. What she isn't used to is strange men washing ashore, which happens one day on her watch.

The man won't tell her his name or where he came from, but Angela, who has a soft spot for strays, tends to him, if for no other reason than to protect her birds and her work. When she later learns why he goes by an alias, why he is a refugee from the law, and why he is a man without a port, she begins to fall in love - and embarks on a journey that takes her deep into Antarctic waters, and even deeper into the emotional territory she thought she'd left behind.

Against the backdrop of the Southern Ocean, The Tourist Trail weaves together the stories of Angela as well as FBI agent Robert Porter, dispatched on a mission that unearths a past he would rather keep buried; and Ethan Downes, a computer tech whose love for a passionate activist draws him into a dangerous mission.

What listeners say about The Tourist Trail

So I write this from the perspective of someone who has participated in banding owls, counting penguins on PenguinWatch, and just generally considering the planet around me. We see Angela, the penguin researcher meet Anais(spelling?), a conservationist who runs a group of sea faring conservationists who use physical tactics such as ramming boats to stop whaling. Then we have Robert, a conflicted FBI agent who has had his life consumed by working with the CDA, and Ethan, a programmer who fancies one of the CDA shipmates.

The book is pretty accurate in regards to the scientific aspects, and while I can't say much about the sea-faring aspects, it really had me hooked. I could picture myself out in Punta Verde counting penguins or working on a ship in the cold arctic. I was on the edge of me sea waiting to find out how the story ended feeling both the highs and lows of all of the characters. The book wrapped up very nicely and I was quite surprised (but pleased) to find out there's a sequel. The only downside was the timeline seemed a bit fuzzy while I was reading it, but it mostly sorted itself out. **spoliler** The only thing I was really confused about was how long Angela was gone from penguin researching.**spoliler**

The entire time I kept thinking of Sea Shepherd, a conservation group who has had quite a few run ins with Japanese whalers and they were later mentioned in the acknowledgements. The book seems to be inspired by real life.

This is one of those fiction pieces that will teach you a bit about how certain, questionable aspects of the world and gives you a bit of thought too.

The author also narrated the book and he did an excellent job. I was provided a code in exchange for my honest opinion and I give this two thumbs up.

Spectacular story, I got swept away and feel a call to action!

This is sincerely a unique story. It is filled with a keen observation of human thought and their consequential actions. I learned so much about animal activists and gained a deep respect for their personal actions. Also, the author was so respectful to the other animal beings that aren’t human. Wonderful story, thank you.

Kept my interest in a unique setting

Begin this book knowing that none of the main characters is particularly sympathetic and that the author is not committed to linear story-telling. That said, it is an interesting story of those fighting to protect the non-human parts of our environment doing battle with almost everyone and everything, including nature itself and sometimes their own personal foibles. The author narrates the audiobook himself, and his delivery is hypnotically pleasing and works well, although there are several sections that need re-editing. I do not in any way regret the time given to this book, but I finished it still not completely sure what the author wanted me to take away from it. I received my copy of this audiobook as a gift from the author and am voluntarily leaving this review.