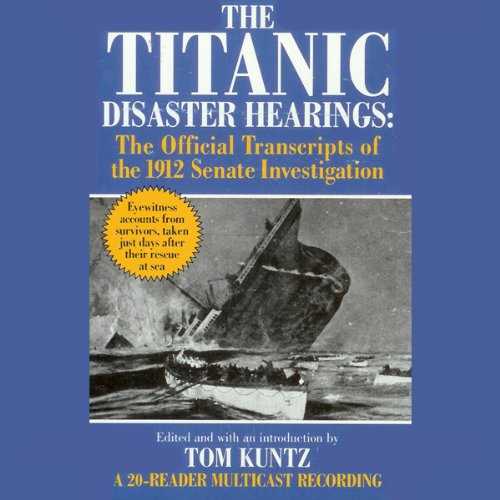 The moving testimony of surviving crew and passengers of the Titanic is recreated in this dramatic multicast recording. Merely one day after the Titanic survivors arrived in New York City, a United States Senate committee began investigation into the wreck of the great "unsinkable" ship. The official transcripts of the investigation include the testimony of J. Bruce Ismay, British Managing Director of the White Star Line, on-duty lookout Frederick Fleet's admission that the disaster may have been avoided, and passenger Daisy Minahan, who recalls the refusal of an officer in her lifeboat to aid those adrift in the frigid waters. Director/producer James Cameron used this historical record in the making of his film Titanic.

What listeners say about The Titanic Disaster Hearings

really different and allows you to draw your own conclusions...recommended by Captain Lori R

Informative, a Trip Back in Time

A lot of contemporary information about what happened, with excellent narration. With both Michael York and Roscoe Lee Browne, I'm reminded of "Logan's Run".