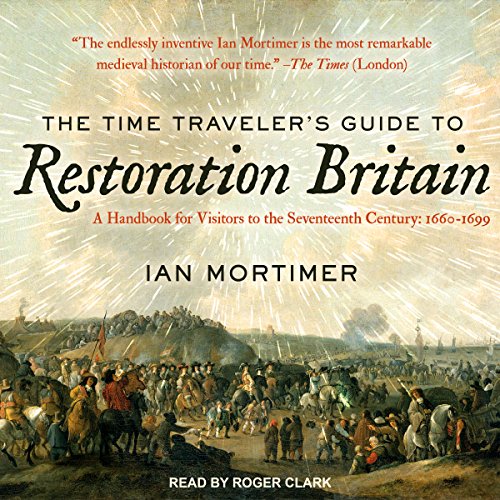 By: Ian Mortimer
Narrated by: Roger Clark
Try for $0.00

Imagine you could see the smiles of the people mentioned in Samuel Pepys' diary, hear the shouts of market traders, and touch their wares. How would you find your way around? Where would you stay? What would you wear? Where might you be suspected of witchcraft? Where would you be welcome?

This is an up-close-and-personal look at Britain between the Restoration of King Charles II in 1660 and the end of the century. The last witch is sentenced to death just two years before Isaac Newton's Principia Mathematica, the bedrock of modern science, is published. Religion still has a severe grip on society and yet some - including the king - flout every moral convention they can find. There are great fires in London and Edinburgh; the plague disappears; a global trading empire develops.

Over these four dynamic decades, the last vestiges of medievalism are swept away and replaced by a tremendous cultural flowering. Why are half the people you meet under the age of 21? What is considered rude? And why is dueling so popular? Ian Mortimer delves into the nuances of daily life to paint a vibrant and detailed picture of society at the dawn of the modern world as only he can.

I just finished listening to Time Travelers Guide to Midieval. It was so good I listened to it twice! Do not expect the same with this. This is so boring by comparison and the narrator is no Jonathan Keeble! Maybe if I’d listened to this first it would have been okay but I doubt it.

Best of the three Guides!

By far the best of the three Time Traveller's Guides! Very rich portrayal of the period by an excellent narrator. Highly recommended from a "History" guy!

A great audiobook, with appalling narration.

This could, and should, have been a great audiobook. Unfortunately the narrator did not appear to be able to pronounce English words correctly, which is somewhat unfortunate for an English audiobook. When a narrator does not even know how to pronounce 'adjacent', this is the point where I have to abandon the audiobook.

I sincerely hope that the audiobook is redone at some future date with the narration being done by somebody who can actually speak English.

Would you try another book from Ian Mortimer and/or Roger Clark?

I’ve read (listened to) the two previous Time Traveller books and loved them. Listened to them both at least twice.

What was one of the most memorable moments of The Time Traveler’s Guide to Restoration Britain?

The narrator! And not in a good way!

I found the voice extremely distracting. The narrator seems to have concentrated so hard on marshaling his broad vowels (to a ridiculous extent) and clipping his words to create this stagey upper class English accent that he was unable to effectively tell the story. It sounded as if he was sitting bolt upright in a hard back wooden chair determined to get those vowels correct, and afraid to relax for a moment. And the really sad part of it is that he constantly “mispronounced” words like: “Juke of Nucastle,” (there are only “Jukes” in this book), the “sixteen ninedies,” (they were all ninedies) ” “Nuuspapers,” ‘Stooart.” I’d rather the book was narrated by a native English speaker like Jonathan Keeble, or Mike Grady (at least they sound like native speakers in the Medieval and Elizabethan books in the series), or that Roger Clark read in a voice he’s more comfortable using. Maybe it’s the producer/director responsible? Either way, I’m so disappointed because I was looking forward to this book so much.Perhaps most people listening to this title won’t find anything wrong with the choice of narrator, but for me it was ruinous to the story. I tried adjusting the speed and the volume and nothing helped to make it better. And that is a shame because Ian Mortimer is a genius at bringing these periods in history to life in a way no one else can.

Could you see The Time Traveler’s Guide to Restoration Britain being made into a movie or a TV series? Who should the stars be?

It and the other books would make for a wonderful documentary series.

I hope Ian Mortimer is working on another time traveller book. I would love Tudor, Victorian and Edwardian editions. Truly gifted writer. Should be on school/college curriculums.

I love history, thus I thoroughly enjoyed this book. So much information. The author did an excellent job. You get a good idea of how the people lived during that time. There are some humorous parts and some really dry parts. Day to day life for the common man was not easy. It makes me question who ever came up with the phrase “remember the good old days”. I do recommend this book. The narrator did an excellent job. My thanks to all involved for making this book available, JK

One of the best historical books that dives into daily life. You too will fall in love with Celia Fines and laugh with and at Samuel Pypes.

I've read 3 or 4 of these books and thoroughly enjoy the peek unto the way people lived in that time. .. the nsrrator is excellent.

I was put off at first by a plethora of statistics which I was afraid were going to comprise the entire book. I would suggest jumping ahead and skipping them to those not pleased by such things. Once what I would call the body of the book is reached it opens up into a picture reveals in patchwork of the various parts of the lives of people. I started by feeling they were alien to mine and indeed somewhat frightening due to the preconceived alien ness I felt. But what was slowly revealed were breathing people living lives. Laughing dying being born loving but above all living human lives. By the end of the book I felt the patchwork had resolved into a finely woven picture of life in the mid to late 17nth century. I met some old friends along the way specifically Samuel Pepys who’s diaries had engrossed me some years ago and another often quoted diarist who’s aquaintance I mean soon to make. This book allowed me to see yellow humans on a timeline not really very different from my own. In its hopes aspirations and follies. Their stories I think will travel with me for some time to come.