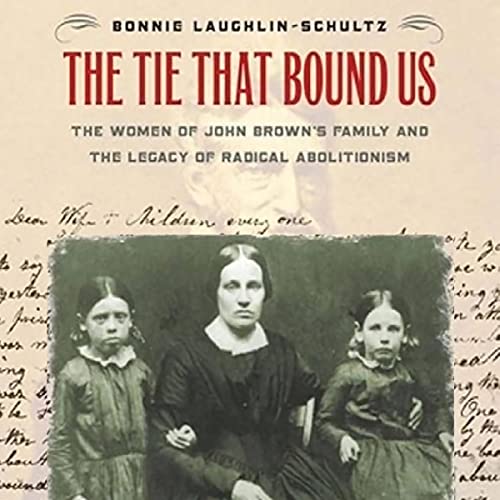 The Tie That Bound Us

By: Bonnie Laughlin-Schultz
Narrated by: Darla Middlebrook
Try for $0.00

John Brown was fiercely committed to the militant abolitionist cause, a crusade that culminated in Brown’s raid on the Federal armory at Harpers Ferry in 1859 and his subsequent execution. Less well known is his devotion to his family, and they to him. Two of Brown’s sons were killed at Harpers Ferry, but the commitment of his wife and daughters often goes unacknowledged.

As detailed by Laughlin-Schultz, Brown’s second wife Mary Ann Day Brown and his daughters Ruth Brown Thompson, Annie Brown Adams, Sarah Brown, and Ellen Brown Fablinger were in many ways the most ordinary of women, contending with chronic poverty and lives that were quite typical for poor, rural 19th-century women. However, they also lived extraordinary lives, crossing paths with such figures as Frederick Douglass and Lydia Maria Child and embracing an abolitionist moral code that sanctioned antislavery violence in place of the more typical female world of petitioning and pamphleteering.

Because of their longevity (Annie, the last of Brown’s daughters, died in 1926) and their position as symbols of the most radical form of abolitionist agitation, the story of the Brown women illuminates the changing nature of how Americans remembered Brown’s raid, radical antislavery, and the causes and consequences of the Civil War.

"Outstanding and will appeal to various readers." (Journal of the Civil War Era)

"Makes a valuable contribution to abolition studies as well as to women's history." (The Journal of Southern History)

What listeners say about The Tie That Bound Us