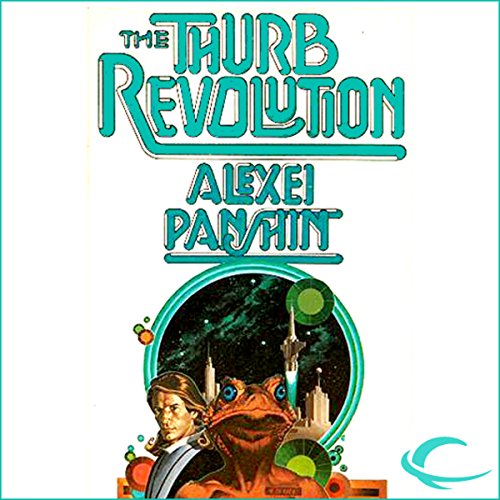 By: Alexei Panshin
Narrated by: Stefan Rudnicki
Try for $0.00

What can you do with Yagoots?

Yagoots? That's what Pickles and Daisy Smetana, formerly the Toast of the Empire, now the keepers of half an inn on a sleepy (but picturesque) vacation planet, wondered: What can you do with Yagoots?

Our hero, Anthony Villiers, sometimes Viscount Charteris and peripatetic player of a most dangerous game, thought he knew. But then, how far can you trust the instincts of a man, however charming, who insists on traveling with a large, furry alien who rides a red tricycle? Someone who unveils suggestive imagery even in the innocent tales of the sainted Mrs. Waldo Wintergood herself? Even if talking pink clouds with illusions of deity do confide in him, how can you be quite sure of a man so sought after for purposes ranging from pornography to hero-worship to ... murder?

What listeners say about The Thurb Revolution

it's hard to describe the plot of this one as it almost doesn't have one. there is a loose connection between events but it's verging on plotless. there are several characters (with some great fun names as in Star Well) and Villiers and Torv are just 2 of the ensemble. things come together at the end and i started thinking about Confederacy of Dunces by Toole and the way several characters story lines mesh at end, and also oddly enough of Pynchon's Gravity's Rainbow with some of the odd events and characters that pop up. i would have to say i am enjoying the light style which is still erudite with it's language and references, but to say that the actual plot enthralled me is not really applicable. it's verging also on not even being scifi as much of what happens could occur in any setting. on to Masque World.