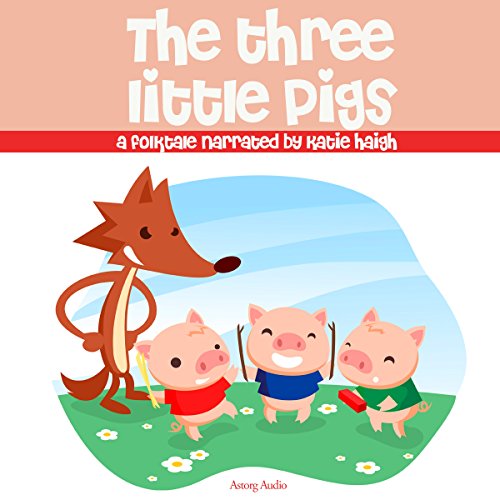 By: uncredited
Narrated by: Katie Haigh
Try for $0.00

The Three Little Pigs is a very funny and famous fairytale featuring anthropomorphic pigs who build three houses of different materials. The story begins with the title characters being sent out into the world by their mother, to "seek out their fortune". The first little pig builds a house of straw, but a wolf blows it down and eats him. The second pig builds a house of furze sticks, which the wolf also blows down and eats him.

Each exchange between wolf and pig features ringing proverbial phrases, namely:
"Little pig, little Pig, let me come in."
"No, no, not by the hair on my chinny chin chin."
"Then I'll huff, and I'll puff, and I'll blow your house in."
The third pig builds a house of bricks. This little pig is very smart, and the end is a big surprise for everyone...

In addition, following this classic tale, you have The Princess and the Pea. This fairytaleby Hans-Christian Andersen tells the story of a prince who wants to marry a princess, but is having difficulty finding a suitable wife. Something is always wrong with those he meets, and he cannot be certain they are real princesses. One stormy night a young woman drenched with rain seeks shelter in the prince's castle. She claims to be a princess. But how can the prince ascertain she really is? This classic tale tells the story of how he put her to the test.
©Public domain (P)2015 Compagnie du Savoir
Foxes & Wolves Pigs Fairy Tales, Folk Tales & Myths Animal Fiction Classics
Show more Show less

What listeners say about The Three Little Pigs

its labeled as the 3 little pigs but its the princessand the pea. my daughter was very upset

I did not like this version of the three little pigs and for some reason, I really didn’t like the narration at all.

my 3yr old son listens to this story 5 times a day and memorized it all. he loves it

love the narration and speed of reader. hey voice was soothing and helped put my grandchildren asleep

They kill the pigs

I didn’t expect that. Every three little pigs story I’ve ever read had them living happily ever after in the brick house

Kept my kid entertained and entranced the whole way through. Now she wants more audio books. She was quiet and into the read.