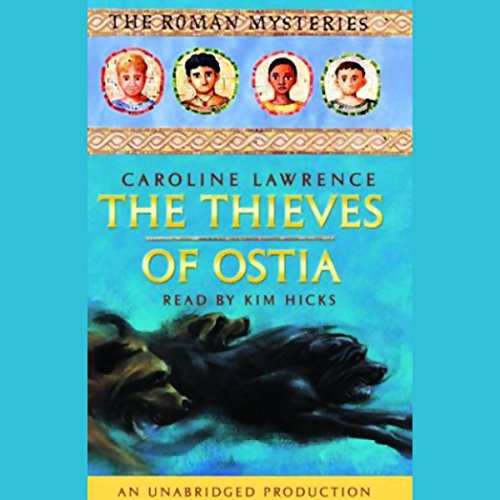 The Thieves of Ostia

By: Caroline Lawrence
Narrated by: Kim Hicks
Try for $0.00

The year is 79 A.D. The place is Ostia, the port of Rome. Flavia Gemina, a Roman sea captain's daughter, is about to embark on a thrilling adventure.

Set in a graveyard, marketplace, and courtyards of a Roman city, this fast-paced mystery paints a vivid picture of the life in ancient times.

When the dogs on Flavia's street start dying, she is determined to find out who is killing them, and why. Her investigation leads her to three extraordinary people: Jonathan, her new neighbor; Nubia, an African slave girl; and Lupus, a mute beggar boy. They become firm friends as they search for the killer, narrowly escape being kidnapped by a slave dealer, and uncover a series of burglaries.

"This historical mystery offers an intriguing glimpse into the customs, attitudes, and class systems of the Roman Empire." (Publishers Weekly)

What listeners say about The Thieves of Ostia

Well written, interesting for adults too

Although the mystery the children tackle in this story is at a young adult level, vivid descriptions and details make this enjoyable for adults with an interest in Roman history too. Even if your interest goes beyond beyond the amateur and you are well read in Roman history, I think you'll find listening to this story enjoyable - I did.

This wonderful book is one that can be read over and over again! The author did a very good job in making it interesting all the way through. Then the narrator did an excellent service to all in the way all the characters were portrayed. This book reminds me of many of the books I read as a young teenager in that I can still remember almost all of them. I hope all who read this will feel the same!

If your kids love a good mystery story this is a great one to listen to together on a long drive. Enjoyable for mom and dad too, and a great look into life in ancient Rome.