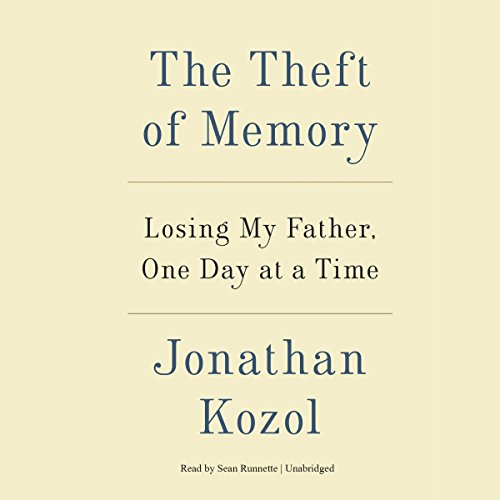 The Theft of Memory

By: Jonathan Kozol
Narrated by: Sean Runnette
Try for $0.00

National Book Award winner Jonathan Kozol is best known for his 50 years of work among our nation's poorest and most vulnerable children. Now, in the most personal book of his career, he tells the story of his father's life and work as a nationally noted specialist in disorders of the brain and his astonishing ability, at the onset of Alzheimer's disease, to explain the causes of his sickness and then to narrate, step by step, his slow descent into dementia.

Dr. Harry Kozol was born in Boston in 1906. Classically trained at Harvard and Johns Hopkins, he was an unusually intuitive clinician with a special gift for diagnosing interwoven elements of neurological and psychiatric illnesses in highly complicated and creative people. "One of the most intense relationships of his career," his son recalls, "was with Eugene O'Neill, who moved to Boston in the last years of his life so my father could examine him and talk with him almost every day."

At a later stage in his career, he evaluated criminal defendants, including Patricia Hearst and the Boston Strangler, Albert H. DeSalvo, who described to him in detail what was going through his mind while he was killing 13 women.

But The Theft of Memory is not primarily about a doctor's public life. The heart of the audiobook lies in the bond between a father and his son and the ways that bond intensified even as Harry's verbal skills and cogency progressively abandoned him. "Somehow," the author says, "all those hours that we spent trying to fathom something that he wanted to express, or summon up a vivid piece of seemingly lost memory that still brought a smile to his eyes, left me with a deeper sense of intimate connection with my father than I'd ever felt before."

Lyrical and stirring, The Theft of Memory is at once a tender tribute to a father from his son and a richly colored portrait of a devoted doctor who lived more than a century.

What listeners say about The Theft of Memory

I loved the way this author wove the complex and fascinating life of his father and his decent into the black hole of loss into a compelling and inspiring story that read like great historic fiction.

I would like to have known more about the authors personal life before the book concluded and so my curiosity caused me to leave one star off. It seemed the author committed his entire adult life to his parents who both lived to be over 100. I felt sad that , other than his venturing out to participate in the duties of a published and successful author, Jonathan had no life of his own or was reluctant to speak of it.

I think everyone should read this book because we will all, at some point, be faced, through our own family or others, such a descent. Excellent and captivating read and very informative.

Additionally, the narration perfectly matched the story. Couldn't have been a more thoughtful pairing and delightful performance.

A very modern love story. So many are faced with a similar challenge. This makes us all stronger. Thank you