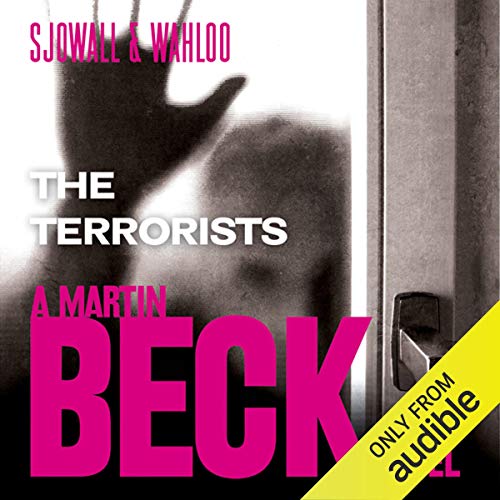 By: Maj Sjöwall,Per Wahlöö
Narrated by: Tom Weiner
Try for $0.00

The Terrorists is the last Martin Beck mystery, finished just a few weeks before Per Wahlöö’s death. The book is, in effect, a marvelous summing up of the series. The story centers on the visit of an American senator to Stockholm. Martin Beck tries to protect him from an international gang of terrorists, while they decide that Beck too should be removed from the scene.

Interwoven with this basic story are two fascinating subplots. One, a classic mini-mystery, is the story of a millionaire pornographer bludgeoned to death in his own bathtub. The other is the story of a young girl, a Swedish hippie caught up unexpectedly in the maze of police bureaucracy.

As in other Martin Beck books, the plot comes together in a totally unexpected climax.

"Lively, stylistically taut….Sjöwall and Wahlöö changed the genre." (Henning Mankell)
"One of the most authentic, gripping and profound collection of police procedurals ever accomplished...Beautifully structured, textured and rendered." (Michael Connelly)

What listeners say about The Terrorists

Would you consider the audio edition of The Terrorists to be better than the print version?

I had only the audio version

Would you be willing to try another book from Maj Sjöwall and Per Wahlöö ? Why or why not?

I had indeed. (The laughing policeman & the locked room)

somewhere in the middle gets slow , but then it gets better

I like the way he meets his girlfriend and how it develops.

Great! how did I miss this?

I loved the Martin Beck books, back in the 70's: "The Locked Room", "The Laughing Policeman" and several others and I often looked for more. Somehow I missed "The Terrorists" so it was a great surprise to find it on Audible. I thought it must be new but it turns out that it is not, but the story really could be. The good, the bad, the smart and the stupid policemen are all there, with hints of politics and romance, and the plot seems entirely up to date. I took a point off for "performance" because the narrator was a bit fast some of the time but he slowed down at the best bits and I thoroughly enjoyed it.

The narration was brilliant. The stories impeccable and the characters wonderful. There is no better crime series.