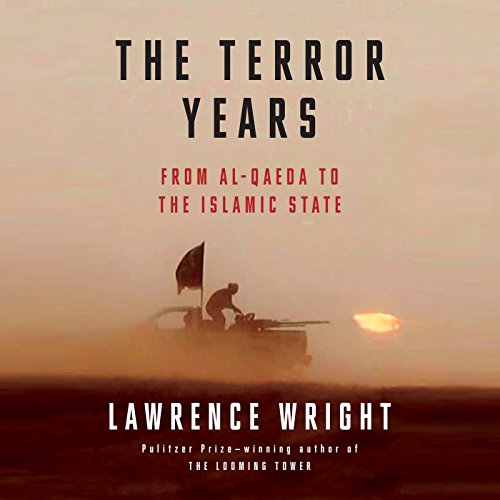 Ten powerful pieces first published in The New Yorker recall the path terror in the Middle East has taken from the rise of al-Qaeda in the 1990s to the recent beheadings of reporters and aid workers by ISIS.

With the Pulitzer Prize-winning The Looming Tower, Lawrence Wright became generally acknowledged as one of our major journalists writing on terrorism in the Middle East. This collection draws on several articles he wrote while researching that book, as well as many that he's written since, following where and how al-Qaeda and its core cult-like beliefs have morphed and spread. They include an indelible impression of Saudi Arabia, a kingdom of silence under the control of the religious police; the Syrian film industry, then compliant at the edges but already exuding a feeling of the barely masked fury that erupted into civil war; and the 2006-11 Israeli-Palestinian conflict in Gaza, a study in disparate values of human lives. Others continue to look into al-Qaeda as it forms a master plan for its future, experiences a rebellion from within the organization, and spins off a growing web of terror in the world. The American response is covered in profiles of two FBI agents and a chief of the CIA. It ends with the recent devastating piece about the capture and beheading by ISIS of four American journalists and aid workers, and how our government failed to handle the situation.

"Wright displays his top-notch reporting in stories about a disintegrating Syria, the never-ending conflicts between Israelis and Palestinians, the faith-based beliefs that undergird al-Qaida and the Islamic State group, and the massive failures of American intelligence agencies. Yet more great work from a dedicated journalist." ( Kirkus Reviews)

What listeners say about The Terror Years

I'm a huge fan of Lawrence Wright - I've read The Looming Tower twice and I thought Going Clear was excellent.

I was very disappointed with The Terror Years which reuses a huge amount of content that can be found in his earlier works. This includes the first three chapters of this book, which covers the stories of Al-Zawahiri, John O'Neill and Ali Soufan. Given that I reread The Looming Tower in anticipation of The Terror Years, I was particularly annoyed to be wading through tales that I had just finished reading a couple of days before.

Then we get into new stories which are great, especially the story on terror plots in Spain - classic Wright - but then again we end up regurgitating old material in the later chapter on the dispute between Al Zawahiri and Fadl.

If this is your first Lawrence Wright book, then it's great. But if you're coming to it looking for a sequel to The Looming Tower, you'll be disappointed, and perhaps left feeling you've been a little bilked.

I thought The Looming Tower was an incredibly compelling read. In fact, I feel it is one of the most important books on the subject of 21st century terrorism. It was very well written, full of intrigue and competently researched details. The Terror Years, however, was highly disappointing. While I expected some material from TLT to appear early in the book in an effort to provide background to the reader, I was surprised by Wright's choice to tell the story in vignettes rather than build a linear, connected story from 9/11 to present. I will try to return the book for a refund from Audible.

Prior to this book, I listened to "Black Flags: The Rise of ISIS". I found both books to be similar in that they both distill a lot of information into a well put together linear narrative. They both seem very well researched, well written, and very informative. However, where I found them to be different was that this author seemed to have written in the style that came across as attempting to be somewhat persuasive. And books like this I always prefer an informative, neutral account I have no problem with his humanizing Siri and civilians, but found some of his word choices to be a bit soft in regards to the scribing accounts of terrorist activities, Terrorists themselves, and Fidel Castro in the epilogue.

I found the information difficult to follow even though I'm an avid audible listener. There are times when I said to myself why is the title of this book is what it is. And I could not answer it.

What didn’t you like about John H. Mayer and Lawrence Wright ’s performance?

Not an issue here.

If you could play editor, what scene or scenes would you have cut from The Terror Years?

It needs to get focused.

cia did not create the internet.

lotts of good information. Historical perspective is much appreciated. A few mistakes i think but overall a very informative book.

Still great, but not quite Looming Tower

Would you listen to The Terror Years again? Why?

Maybe, if I have questions regarding the subject matter and I want to review.

Incredibly well researched, nobody does their homework better than Wright.

When the surviving hostages explained their experiences and how they felt about the people who were left behind and eventually killed.

I was hoping for more information regarding the founders of ISIS similar to what Wright did with Looming Tower.

Not the Looming Tower but stands it's ground

Lawrence Wright is brilliant as always. The only consciencious I could have a conversation with.

I did enjoy the book, but it wasn't what I was looking for. The first 5 chapters are abridged histories of the principals, be they a group or individual, that held pivotal roles up to 9/11 attacks. Then the book shifts to in depth descriptions of geopolitics and providing additional details on select stories that support the previously described layout.

I was looking for more analysis and details on the completed operations of ISIL and the impact in the region and counterterrorism. I guess I will look elsewhere.

This is a book which needs to be on everyone’s reading list. Lawrence Wright has done a superb job of research and has a mastery of language which keeps your interest in such a difficult topic.

There's were parts of this book I enjoyed more than others. I thought it would be more historical, which it is, but it's more stretches of the authors personal experience mixed in with stretches of pure nonfiction, historical record. Some useful information to take away and learn about the region, but it bounced around a bit as a result.

Narration so bad I won't be able to listen.

Performance wins *minus five* stars from me. Therefore, even if the story was (it probably IS) a 5-star affair, over all the score would be a neat zero. Therefore, I think I've been quite generous.

Terrible terrible shame. "The Looming Tower", read BY THE AUTHOR, was A M A Z I N G. Totally totally amazing.

Don't get me wrong, it's an *interesting* voice. Not necessarily unpleasant. But it's...it sounds like something from a comedy sketch.

Did not enjoy.
This is basically a rehash of The Looming Tower (which was good) and some unbelievably boring stories about working at a news paper.
If you've read The Looming Tower then skip this book. If you haven't, get that instead.

Essential listening that interrogates and sums up the impact of terror in the making of the modern world.