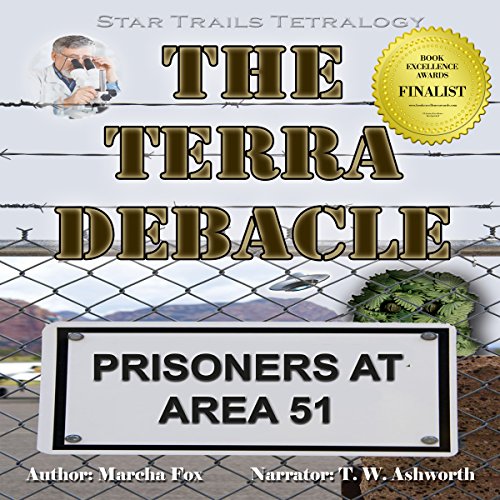 The Terra Debacle: Prisoners at Area 51

It's May, 1978, and a normal night at Hill Air Force Base in Ogden, Utah - until a bogey shows up in their air space. It gets even stranger when the UFO requests permission to land. It changes its mind, but by then, F-16s escort it to the ground. A human girl in her early teens and a robot exit the craft, and a strange botanical lifeform is found onboard later that night by a USAF landing party. The vehicle, robot, and the strange plant are impounded and subsequently sent to Area 51.

NASA astrobiologist Gabriel Greenley is called in to study this new lifeform that at first appears similar to a botanical species known as oxalis. As a psi-sensitive, Greenley quickly learns the specimen is highly intelligent and potentially dangerous when he attempts to take a leaf sample. He backs off, frustrated, and desperate to investigate the scientific details of this new botanical species that combines intelligence with a metabolism based on photosynthesis. Meanwhile, the specimen, a flora peda telepathis named Thyron from the planet Sapphira, is investigating his new environment through all frequencies of the electromagnetic spectrum as well as his suite of psychic abilities that includes remote viewing.

Greenley eventually gets his leaf sample and makes a ground-breaking discovery that he can never share, due to his security oaths and research agreement at this top secret facility. Eventually, however, he's confronted by an ethical dilemma that forces him to make a treasonous and potentially deadly decision.

A unique combination of hard science-fiction, suspense, intrigue, and a touch of humor, this story has been described as a "dark version of ET: The Extraterrestrial". Strong characterizations, a mysterious setting loaded with intrigue, and unexpected plot twists make this an unforgettable tale whether you're a science fiction fan, botanist, UFO aficionado, or simply enjoy a good story.

What listeners say about The Terra Debacle: Prisoners at Area 51

The Terra Debacle is a fictitious tale of a captured extra-terrestrial being. It will tease your mind with Thyron, a sentient botanical life form with the power to communicate telepathically with Gabriel Greenley, his keeper, his potential tormentor and soon to be his greatest ally and friend.

This is a book I first read the digital version which I rarely do but I really adore the series. Listening to it in audio was possibly even better. The narrator does a fabulous job with the voices and pacing. I loved it just as much in audio and laughed even more.

Thyron is a sentient plant. He thinks, speaks on a psi level and walks. He can be a bit overbearing as his intelligence supercedes most but its this super clever part of him that makes me laugh and how he views humans. Since we're omnivores he freaks out that humans may want him for a meal and even worse when he's put in a crate made of wood. The author put me in his head and there are some very plausible thoughts, if plants do think.

Ayways, Thyron is captured and taken to Area 51 in the late 70s. I don't remember much of the early 70s but very much remember the late 70s and the author nailed it with her references including TV. That also kept me in laughter. The story is well written and well orchestrated by the narrator. Its definitely one to listen to and no need to be a hard core sci-fi fan. Anything technical is kept in short and only furthers the plot.

This is an SF story. Interesting point of view. Kind of different from what I usually listen, but liked it. The narrator did a good job, nice voice changes, good tempo end enthusiasm felt in the voice. Liked the changes of the voice among the characters. The book is 8 hrs and 57 mins long, so you might listen to it for a few days.
I would recommend this book to sci-fi fans.

My hope is that this review helps in your decision to obtain this book.
*This book was given to me for free at my request and I provided this voluntary review.

Brilliant sci-fi that is heavy on the science

I totally geeked out as I listened to this book and am still sitting here a bit stunned. This is hard science fiction that challenged me yet used vocabulary that I could understand. I went to Cal and there were times I felt like my instructors were speaking a foreign language. That's how lost I would be. I could follow along with Marcha Fox's writing which was not only a relief but stimulating also. You forget how much you crave that stimulation. If you like Vernor Vinge or Peter K. Hamilton then I think you'll like this


The narrator seems to be a bit uneven at times. I had a hard time deciphering which character he was voicing at first. He grew on me though. His voice for Thyron was eerily close to Peter Larkin's voice for Vinge's Skroderiders.

Can we please have the rest of the series on audible??

I was a bit surprised to see that this is the 7th book in a series. Especially since I couldn't find the previous 6 books. That being said, it didn't read like a 7th book of a series. It had that old school sci fi movie feel to it, but with lots of humor. All in all, pretty enjoyable.

Accepted this audiobook for free as long as I honestly review it.

The concept of the story is very interesting. I enjoyed that much of the story is from the alien’s point of view, which often made fun of humanity. I thought the narrator did a good job with the various characters. A light, enjoyable listen.
This is a voluntary review of a free audiobook.

I really don't know how to review this book - I loved it, it's tongue in cheek sci-fi, a little quirky in places, funny and a lot of fun to read/listen too.
It is the first book by T.W Ashworth I,ve read and will look for more from this author.
The book reminded me of "Little Shop of Horrors" The narration is great and makes the characters "human".
I was given this free review copy audiobook at my request and have voluntarily left this review.

I received this audio book for free in exchange for my honest review. This quirky and extremely well written story is backed by superb narration. I enjoyed it immensely.

The plant came from space!

A quirky and oddball science fiction story which I found entertaining from start to finish. The narration manages to be both comic as well as informative. It reminds me of a kind of Hogans Heroes-esque parody of a 1950s sci-fi movie (even though it's set in the 1970s). Like if the Day the Earth Stood Still had a bunch of really oddball characters. I love the fact the alien was a plant, as well, which is a nice diversion from human-like aliens. The science, references, and writing is all top notch and most readers would very much like this book I think.

Nothing on this low tech planet was easy.

May, 1978: After an alien space ship in need of repair lands on earth, two of the occupants leave before the ship can be searched. The remaining traveller is quickly found and, encased in a protective cage, transported with an 'expert', a natural biologist specialising in botony, to Area 51. Because Thyron, the alien, was a sentient telepathic walking plant, standing about two foot in height, and horrified to find himself on this primative, hostile and (from aplants eye view) cruel and barbaric world.

This inovative and gently humourous look at the earth from a plant's perspective is also a good S.F.thriller, nicely characterising several of the humans as well as the plant itself. The narrator, T.W.Ashworth, has a pleasant sing song delivery with good intonation and a smile in his voice. His interpretation of the individual character voicings is also distinctive and appropriate.

Overall, a fun book with a very firm basis in solid science fiction ideas. However, the constant stating of precise place and time, which takes between seventeen and twenty three seconds on every occasion, does become over intrusive.
My thanks to the rights holder of The Terra Debacle who, at my request, freely gifted me a complimentary copy via Audiobook Boom. It was pleasantly querky. An enjoyable read.