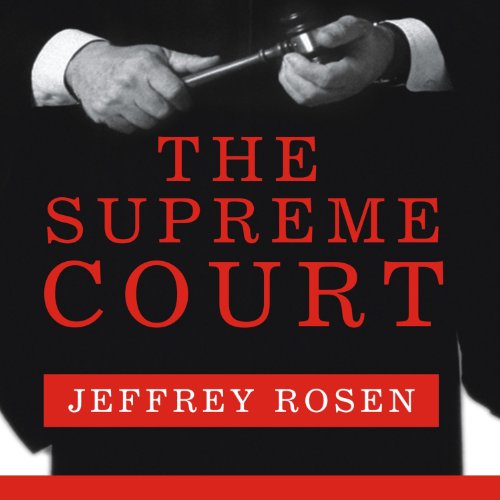 By: Jeffrey Rosen
Narrated by: Alan Sklar
Try for $0.00

A leading Supreme Court expert recounts the personal and philosophical rivalries that forged our nation's highest court and continue to shape our daily lives.

The Supreme Court is the most mysterious branch of government, and yet the Court is at root a human institution, made up of very bright people with very strong egos, for whom political and judicial conflicts often become personal.

In this compelling work of character-driven history, Jeffrey Rosen recounts the history of the Court through the personal and philosophical rivalries on the bench that transformed the law - and by extension, our lives. The story begins with the great Chief Justice John Marshall and President Thomas Jefferson, cousins from the Virginia elite whose differing visions of America set the tone for the Court's first hundred years. The tale continues after the Civil War with Justices John Marshall Harlan and Oliver Wendell Holmes, who clashed over the limits of majority rule. Rosen then examines the Warren Court era through the lens of the liberal icons Hugo Black and William O. Douglas, for whom personality loomed larger than ideology. He concludes with a pairing from our own era, the conservatives William H. Rehnquist and Antonin Scalia, only one of whom was able to build majorities in support of his views.

Through these four rivalries, Rosen brings to life the perennial conflict that has animated the Court, between those justices guided by strong ideology and those who forge coalitions and adjust to new realities. He illuminates the relationship between judicial temperament and judicial success or failure. The stakes are nothing less than the future of American jurisprudence.

What listeners say about The Supreme Court

While not a comprehensive history of the Supreme Court, this book does illuminate key periods in the court's history by tying the judicial philosophies of justices such as Marshall and Warren to those of contemporary justices such as O'Connor and Scalia. The book is succinctly written and well-read, and while an academic work, it avoids being too dry. A must-read for anyone interested in legal philosophy or American history.

You would not be reading this review if you were not interested in the subject. So I can highly recommend the book to you. It is well written with biographical outlines of the personalities involved and the case histories that exemplify the outcomes both at the time and in retrospect. Personal views of the author are evident but do not detract from the content.
Sklar’s narration makes the book. A lesser narrator could have made the author’s lecture like presentation dry. I will look for more of his work.

A must for Court Watchers

Although Rosen's personal bias comes through at times, his perspective on the history of the United States Surpeme Court is interesting. If you are a "Court Watcher" you will find the last chapter on Rehnquist/Saclia and the epilogue with excerpts from an interview with the new CHief Justice particularly interesting. Historians will appreciate the earlier chapters.

No longer are these people just bobble heads on top of black robes. This is such a guilty pleasure. To discover that our justices are regular people with all of the quirks and brillance that make us human makes it so worth the download. Beware! If you are a Supreme Court geek like I am your just gonna want to know more. This really is Edu-tainment!

This is a fascinating and well written narrative depicting the lives, philosophies and at times combative interactions of six of the greatest Supreme Court justices. Anyone new to US judicial history or, like myself, well versed in the subject, will surely fine this book insightful, thought provoking and highly entertaining.

This is an outstanding book -- thoughtful, well-researched, well-written, and well-narrated. Rosen's thesis is both intriguing and argued compellingly. He offers valuable insights about the court that apply to other dimensions of our public, political life.

I recently watched Jeffrey Rosen on T.V. interview various Supreme Court Justices and this trigger me to buy this book as it seemed somehow I had skipped over Rosen in my readings on the Supreme Court.

In his book “the Supreme Court” Jeffrey Rosen, an acclaimed observer of the Court, teaches law at George Washington University, argues that temperament trumps all. “Humility and common sense” he writes, more than “academic brilliance on rigid philosophical consistency” separates the truly influential justices from the other.
Rosen premise rests on four rivalries, each from a different period in the Court’s history, each pitting what he calls “pragmatic” personality against an “ideologue”. There are as follows:
1. John Marshall against Thomas Jefferson (Marshall’s greatest antagonist, was a President not a justice.)
2. John Marshall Harlan against Oliver Wendell Holmes Jr.
3. Hugo Black against William O. Douglass
4. William H. Rehnquist against Antonin Scalia

In the book Rosen goes into detail about each of these 4 sets of justices. Rosen’s book makes a less than convincing case that agreeability is the key to influence. Part of the problem is that Rosen’s neat dichotomy (pragmatist/ideologue) may not be neat enough. No more helpful than labels of liberal or conservative. Take for example Harlan and Black. Both appear by the author rendering, a lot like ideologues. Harlan the lone dissenter in Plessey v Ferguson (1896) ruling created the separate but equal. Black similarly is painted as a free speech absolutist. Rosen say Black’s pragmatism is his ability to bring his brethren around to his view point without budging much in the process. Rosen is right that this skill accounted for much of Black’s influence. But to suggest in Black’s case or in general that personal temperament matters more than intellect seems a stretch to me. “The self –centered loner” he writes “is less-effective than the convivial team player”. This view is not without merit. Rosen’s contrast between the churlish Scalia and the conciliatory Rehnquist makes the point effectively, even if the other chapters do not. In each case Rosen contends, the Justice who had the judicial temperament that includes pragmatism, common sense, trust and institutional loyalty such as Marshall, Harlan, Black and Rehnquist were able to more effectively shape American law.

Rosen blends biography with clear descriptions of legal cases that illustrate his point. The book ends with an interest recent interview with Chief Justice Roberts. The author points out that Roberts worked for Rehnquist as a clerk and sees Marshall as a model. If you are interested in history or the Supreme Court this is an interesting book to read. Alan Sklar did an excellent job narrating the book.

Good, but some bias

This book is very interesting and offers a look into some important personalities in the Court's history. The premise of the book is that judges are more effective when they compromise their ideals to gain incremental changes and when they build rapport with other justices. This is defined as "judicial temperament" by the author.

Each judge's judicial temperament and effectiveness is profiled in comparison to a contemporary with an opposite temperament. The author veers from his course when discussing Justice Scalia, though.

More than any other justice profiled, the author attempts to evaluate the merits of Scalia's legal opinion - uniformly drawing on the opinions of those opposed to Scalia's jurisprudential philosophy.

Much is made of the Bush v. Gore case, for example. The author quotes Scalia's recital of the legal basis for an injunction - something not terribly exciting in the real world. Yet, it is presented as a prediction of the outcome of the vote count. "Scalia's prediction was wrong," the author chides.

The real-world inconsequence of Scalia's statement in the injunction and the overzealous attention paid to it by some are traceable directly back to political flamethrowers working for Gore, not to any legal scholar. There are several other examples of heavily-biased criticisms that are uncharacteristic for this book.

In the end, I felt that I had been set up - that the book's premise was really just a pretense to launch an assault on Scalia. The author stretches legal reasoning to make Scalia seem inconsistent on issues where he is steadfastly consistent.

I still enjoyed the book, but I could have done without the bias.

I am a lawyer who follows the Supreme Court carefully. My politics are mostly to the left of center. I agree with this author's sentiment that Bush v Gore was a shocking intrusion into the prerogatives of the political branches, and arguably illegitimate. But I suppose if I were to write a book about it - the Court - I'd try to do so without turning it into a screed.

A person who makes it to that bench should be presumed to be, by default, worthy of respect. If on rare occasions I deem a judge less than worthy - such as Clarence Thomas - it should be fair to say that it is remarkable because it is rare.

Most importantly, I would try to understand the operations of the Court in terms of their jurisprudence more than their politics. This slim scold of a book fails that standard on every front. It is less a book about the Court than a polemic on its personalities. Mr Rosen's portrayal of Justice Kennedy, for example, isn't so much withering, as was no doubt the plan, but rather, puerile. The author presumes to accuse that judge of intellectual vanity, while filling up these pages with his own. If you want to know about the Supreme Court, this is not a good place to start.

A bit too much of “just the dry facts’.

I would have preferred if they had given a bit more life to the different judges.