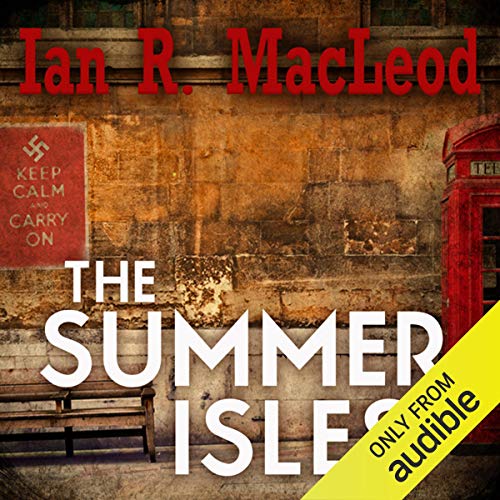 In this fine work of full-length fiction by award-winning author Ian R. MacLeod, a chilling alternate history unfolds.... An elderly English historian, swept along with the rest of his country by the march of history, sways between reminiscences of his life's true love and his efforts - in his own fumbling way - to change his nation's course.

In this tale, Britain has lost the First World War and turned to fascism. As a homosexual, the narrator suffers both the fear of repression and the loss of his lover to the fascist government, while the ordinary people of the rest of the country enjoy shiny modernity and, with it, briefly, the envy of other nations.

MacLeod's tale shows convincingly that no one individual or country is immune from totalitarianism, and the identity of his British dictator forms a twist that, both beguilingly and deceptively, never stops turning.

What listeners say about The Summer Isles

5??? Story, With Perfect Narration & One Caveat.

The caveat first: the protagonist of this magnificent alternate history--set in a world where England rather than Germany suffered humiliating defeat in The Great War and subsequently descends into fascism--is a homosexual. There is some description of sexual acts between two men in this book--and also of absent longing of one man for another. This is not the focus of the book--and the protagonists homosexuality really serves more than anything to emphasize his alienation in a fascist state, but threre it is. if you are very uncomfortable with/have no desire to read about/cannot accept the idea of 'the gays' you should read no further, but mark this review as helpful and move on to find a more suitable book.

That said, I am so glad that this was not enough to scare me off. Because it is without exaggeration that i say that this is possibly the most literary entry in to the genre of mid-century alternate history since Dick's 'Man in High Castle'. I love this genre and i have read all of them that i can find, and this is by far the best that I have read recently. Is it on par with orwell? probably not. But it is on par with 'Man in High Castle' and 'American Pastoral'. Blows out of the water anything that the pulp authors in the genre-turtledove and the rest--have ever written. (And i love and read those as well.)

What truly made this book a treat though was the narration. Steve Hodsons slow British accent was so perfectly suited to the story that it felt more like listening to the protagonist speak than like being read a book. The narration is so perfect, in fact, that i am almost hesitant to suggest the print book to anyone because i don't know how much my sense of the quality of the writing comes from the flawlessness of the narration.

Read and listen to this book!

I can't believe this book has received so little attention on Amazon and Audible. As of this writing, there are a total of only six reviews on Amazon.

Other reviewers have summarized the book and I don't need to repeat their comments.

Suffice it say that the writing is beautiful. The narration fits the story so perfectly I couldn't imagine it being done any better.. Between the two, I've never seen Amazon's Kindle 'Immersion Reading" concept work any better.

I came across this book by accident, attracted to it by the reader, whose work in radio drama I'm familiar with. From the very beginning I was drawn into the novel's slow burn. MacLeod does not immediately lay out the 'alternate' history: that Britain has lost the Great War, suffered economic meltdown (a wheelbarrow of notes would buy a cabbage) and turned to a very English kind of fascism. Instead, we follow Geoffrey Brook (or is it Griffin Brooke-with-an-e?) as he secretly pursues his desires and persists in his surprising academic success. Sinister developments - the trashing of a suburban house and disappearance of seemingly ordinary citizens, the blank on the map where trains pulling cattle-wagons shuffle towards an unknown destination - are described coolly, steadily. As readers, our emotions are never exploited, our sense of 'real' history never assumed. Steve Hodson's narration is by turns wryly ironic and restrainedly emotional; calm and warm, distant and analytical. Some of the scenes must have been extremely difficult to read: they are certainly difficult to listen to. I finished the book, with its many astonishing twists, feeling that it should be compulsory reading for all historians, all politicians, all citizens who talk about 'British values' as if they were immutably wholesome.

Outstanding, the surprise find of the year

Well, what a good book! And beautifully read. I've never read this author before and I've never heard of this book. I downloaded it on the strength of the reviews. What a good story idea based on a strongly drawn central character. This character simply accepts that his England is the way it should be and tells his personal story, which is in itself interesting. He lives in a dictatorship where - almost without him realising it - he has been protected and given a sort of secluded privilege. Gradually, the (alternative history) England he lives in becomes clear to the reader and the truth of what has been happening around him emerges.

I’ve listened to nearly 100 Audible books and this is one of the very best. The central alternate history idea is believable and realistic; the story is gripping and the prose beautifully descriptive.
For some reason it was only published in a limited edition on paper. Other reviewers have suggested this may be because of the gay content – although surely not in the 21st Century? The sexual descriptions are not included for titillation (unlike some books popular at the moment!) but to give an insight into the main protagonist’s character and actions.
Seeing as the book is difficult to obtain on paper, Audible have done readers and listeners a great service by making it available. And maybe it’s even better than the written version as Steve Hodson does a wonderful job of reading it, creating a character that’s totally believable and sympathetic.
I hope this recording brings the book to a wide audience – it deserves it.

Stay with this one

Don't be put off by the detailed minutae of the life of an elderly, Oxford don in a 1940's 'alternative' England. This is just the build up to a revelation which will make you gasp. Yes, seriously!
The narrator is perfect; his ironic nuances and weary acceptance of events unfolding around him only emphasis the feeling that we are in our own world but also in 'another'.

Although very reminiscent of 1984 this is a very different book, though dealing with very similar themes. The writing is beautiful, thoughtful and scholarly, while the narration sounds so much like an Oxford University lecturer it is so very reassuring. The blacks and whites of politics, as are the good and the bad, mixed into muddy greys. And it seems so much more vivid for that, perversely.