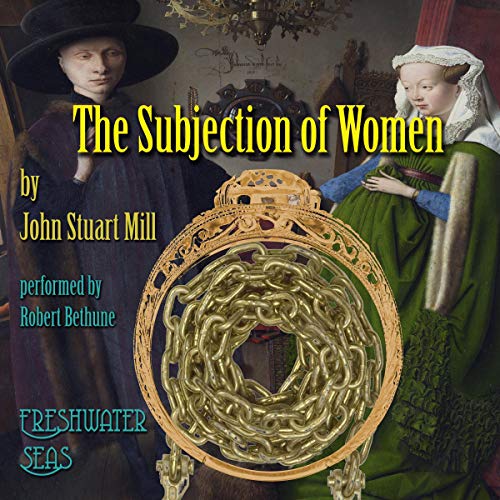 The Subjection of Women

By: John Stuart Mill
Narrated by: Robert Bethune
Try for $0.00

English society in the 1860s was on the brink of enormous change, and some of the biggest changes coming to birth in that time were tremendous changes in the status of women - changes affecting politics, economics, law, government, business, education, psychology, religion, and sexuality, and the list goes on. The changes John Stuart Mill foresaw in 1861 as he wrote The Subjection of Women were just beginning to surface in his own time and have not yet run their full course in ours. Indeed, changes happening today and yet to come in the relationship between women and men remain some of the most important developments of our own time.

Mill was a militant visionary, far in advance of the thinking of most people of his time, both men and women. Yet as we listen to his words, one cannot help noticing that in many, many ways, he remains a quintessential Victorian gentleman with many of the habits of thought characteristic of such men remaining in full flower. We may well smile at his unconsciously patronizing attitudes toward women's cultural achievements. His concepts of the lives of women not of his own high social class seem drawn more from Victorian melodrama than Victorian reality. His blind spots are strikingly obvious. For example, when defending women's abilities to carry out long-term projects, it never occurred to him to point out that raising a child is a 20-year endeavor.

In other words, Mill was a human being, and even the extraordinary vision articulated in this book was that of a fallible man. That being said, his book remains strikingly relevant to our own times. Anyone with any sensitivity to social justice cannot help but be struck by the fact that were Mill to come to life today, he would see that many of his most trenchant criticisms still apply, and that many of his best visions remain to be realized.

What listeners say about The Subjection of Women

Early call for equality of the sexes

Although THE SUBJECTION OF WOMEN was written 150 years ago it remains as relevant today as it was when it was written. The book is a full throated call for absolute equality in all things of men and women. Mill's logic is impeccable and his argument complete. Unfortunately the narration is only adequate.

Pieces of history with little change.

Very impressive and well done. Thank
You for the expansion of knowledge and thoughtfulness. I will listen to it a second time.