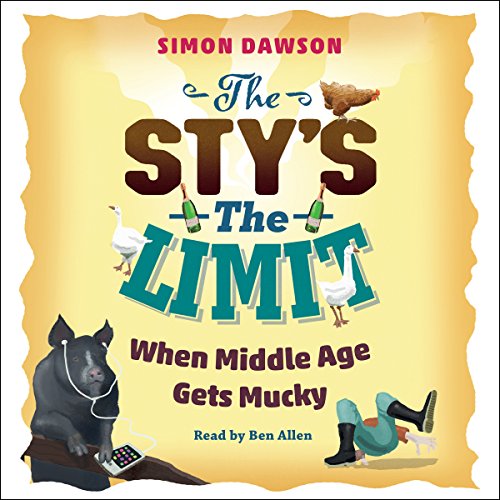 Following a drunken misunderstanding, Simon Dawson gave up his job in the city, moved to the wilds of Exmoor and became an accidental self-sufficient smallholder with an array of animals. But that was years ago now.

Following up on his first book, Pigs in Clover, this is the story of what happens when he suddenly realises that his life is changing all over again. He's not quite the spring chicken that he used to be: he is, horror of horrors, getting older.

With a cast of best friends (some more helpful than others) including Ziggy, a panicked soon-to-be father desperate to grow up; Garth, an annoying teenager; and a rather handsome pig called The General, a plan is hatched to help each other mature (or immature).

Heartfelt discoveries and hilarious endeavours ensue as they work through their age-related angsts, all with a fair dose of pigs, chickens, lambs and animal madness along the way. This is Exmoor's uplifting, laugh-out-loud antidote to middle age in the mud - a place where you truly realise that the sty's the limit!

"An amazing story of love, laughter and the challenges of living from the land.... Simon's self-sufficient rural life is an inspiration to us all." (Ben Fogle)

What listeners say about The Sty's the Limit

Simon has become my hero, I listen to audio books while driving and this book made me look forward to getting in the car each day and driving a couple hundred miles. I've never listened to a book so fast, I listened every minute I was in the car.

I do love the character Ziggy too, I do hope he really exists somewhere.

The guy who narrates is brilliant at the various voices, I normally get annoyed when it's not the the person themselves reading the book but Ben Allen is excellent.

Thanks to simon and Debbie for sharing their fun, exciting yet challenging life with us all,

i loved this book and was sorry when it finished. Not as funny as the first book but you realy get the felling how Simon copes with a small holding. I wish i could do what he did.

I love these books, fantastic read , I have even started making soap and jam!!!

I loved this book and the previous one the way he cheated death on numerous accessions made me laugh so much just what I needed. The person reading was excellent too

Shame such a nice people are making money from killing animals. There are other ways and always there is a choice

The Continuing Saga of How Simon Cheats Death

So following on from Pigs in Clover, Simon delights with his not so every day tale of farming folk. Guaranteed to make you laugh out loud, screech in horror, fight back the tears and come away smiling.

Easy listening. Made me laugh out loud. Looking forward to listening to the next book.

I had to eek this one out, could have listened to it in a single sitting! Funny, interesting, full of great characters and thoroughly enjoyable!

Laugh, cry & cringe is what I did throughout this book and loved every minute. I didn't want to put it down and I didn't want it to end.

not nearly as good..

book 1 'Pigs in Clover' is superb.

book 2 'Sty's the Limit' feels stretched, creating a story from not a great deal much more; lots of repetition from book 1

absolutely loved 1, would not recommend 2