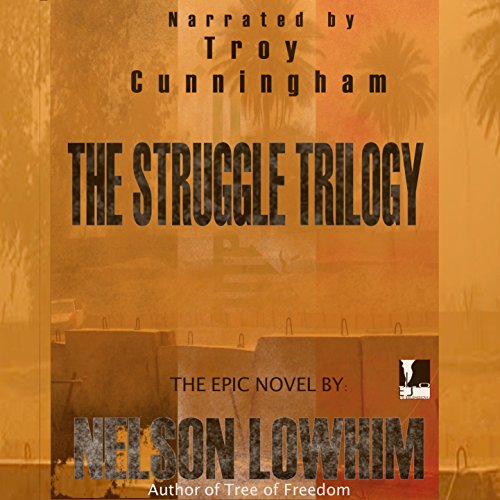 By: Nelson Lowhim
Narrated by: Troy Cunningham
Try for $0.00

This is the entire set of The Struggle series. It includes The Struggle, The Struggle Knows Not, and The Logic of Morals. "The struggle knows not the logic of morals" is an Arabic saying.

A man, Walid, lives in Baghdad, where bombs tear apart markets and flesh, Americans shoot at anyone who crosses them and the police are too scared to stop murderers as the streets run red with blood. Walid must protect his family, his neighborhood, from this onslaught of violence. But how? He decides to use his brains and gun.

As a consequence, he dives into the underbelly of a city in the throes of civil war. Fighting other Iraqis and the Americans, Walid must figure out how to live just one more day.

Mohammad, Walid's childhood companion, decides to sell out his friend to get personal justice.

Qassem, an Iranian, trained to work in the shadows for Tehran, plays with men's lives to achieve his goals.

Douglass, an American soldier, dutifully carries out his mission.

Everyone fights to come out on top, but not all of them can survive. Who will make it to see another day?

What listeners say about The Struggle Trilogy