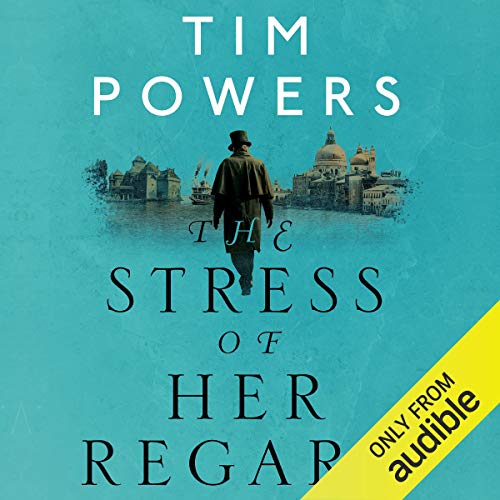 The Stress of Her Regard

When Michael Crawford discovers his bride brutally murdered in their wedding bed, he is forced to flee not only to prove his innocence but to avoid the deadly embrace of a vampire who has claimed him as her true bridegroom.

Joining forces with Byron, Keats, and Shelley in a desperate journey that criss-crosses Europe, Crawford desperately seeks his freedom from this vengeful lover who haunts his dreams and will not rest until she destroys all that he cherishes.

Told in the guise of a secret history, this tale of passion and terror brilliantly evokes the nineteenth century. The chilling horror and adventure blend to create a riveting romantic fantasy.

What listeners say about The Stress of Her Regard

I love power's works, but did not enjoy this book

The book was tiring and pompous, and the narrator was suitable for it... I do not recommend this book. I nodded off at times, or went to fetch something and came back, basically without missing much.

Powers has taken historical figures and snippets of folklore and woven them into a wonderfully engrossing and believable story. Having just finished another of his novels I can see this is a trait to his writing. The fantasy element is contemporary and will appeal to a broader audience than the traditional genre. Kudus too to a very articulate and well matched narrator who and a special something. Especially with the short verse at the start of the chapters.