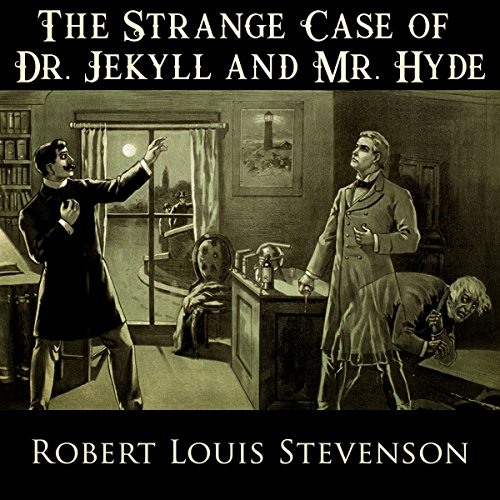 The Strange Case of Dr. Jekyll and Mr. Hyde

The Strange Case of Dr. Jekyll and Mr. Hyde is about a London lawyer named Gabriel John Utterson who investigates strange occurrences between his old friend, Dr Henry Jekyll, and the evil Edward Hyde. The novella's impact is such that it has become a part of the language, with the very phrase "Jekyll and Hyde" coming to mean a person who is vastly different in moral character from one situation to the next.

What listeners say about The Strange Case of Dr. Jekyll and Mr. Hyde

A great classic for a good reason.

A great work which exemplifies the duality of man.It is a great work for the many issues it questions about man.

The Narrator did a good job in presenting this work.

An Excellent Narration of a Great Classic

I've always loved this story and JD Kelly does it justice with his narration! The characters are given their own voice and the accents are spot on. Some may have a problem with the language of the time, it is quite different from how we speak today but Mr. Kelly does this without any problems. I thoroughly enjoyed listening to this classic and will listen to it many times in the future.

Surprisingly, I've never read this story before, partly because of my knuckleheaded belief that ALL horror stories were, um, horrible! Fortunately, I've come to discover this is untrue. I like good writing, and I find myself picking up some of the classics that I dismissed while growing up... Yes, this is a classic, a period piece, but this story is absolutely timeless. Sure the language used is a bit archaic, but it helps set the tone and flavor of the tale.
J D Kelly is a simply marvelous storyteller, and he breathed vibrant life into this marvelous story!

Fantastic rendeition of the old classic

This is a classic tale of good versus evil. If you are reading this, you are probably familiar with the story. So I won't bore you with that. This was my first book narrated by JD Kelly. I thought he knocked this out of the park and gave new life to an old story. For me, this was a difficult challenge, given the style of writing. Definitely worth checking out if you are a fan of the story and want to experience it a new way.

How can you give this classic thriller anything less than 5 stars? The reading is well done and the story is just as thrilling as I remember it from previous readings for academic purposes. A word of caution though. The language is Stevenson's, lyrical and poetic, but it isn't something you can easily follow while doing the dishes or playing with the kids - not that the story line is suitable for the kids anyway. You need to listen to follow it, but it's well worth the effort.

I actually haven't read this broken English before I heard this book I did read it in Hebrew and it was very good to listen to it in English as well as always the classics are the classics Perfection indeedI was given this free review copy audiobook at my request and have voluntarily left this review.

Most of the book was written as a psychological thriller leading up to the reveal of the relationship between Jekyll and Hyde, which everyone already knows, but still a good read for fans of classic monsters like Dracula and Frankenstein.
Good narrator.

A classic tale which still stands the test of time, from a master of writing.
It is 150 years since this was written, yet in many ways it is prophetic of todays drug culture.
Narration is excellent and captures the mood and the times.
An excellent choice of a read that dips you into Victorian London.
I received a copy of this audiobook at my request and voluntarily leave this review.

Good to finally hear it

Dr Jekyll and Mr Hyde -- it's become a turn of phrase instantly recognizable regardless of whether or not you've read the whole story. I was one that had not, but am now glad that I did.

There are no surprises here for anyone who is familiar with the concept of Dr Jekyll and Mr Hyde at the very least, but it is good to hear in greater detail what happened and why.

The older style of speaking and writing may become a bit distracting, but stick with it, it's good stuff.The narrator did an excellent job with the reading as well.

I was provided this audiobook free of charge in exchange for my honest review. At just under 3 hours, it's definitely worth a listen.

A classic tale brought to life

The classic story of good versus evil brought you now on audiobook. The Narrator does an excellent job bringing to life the various characters which inhabit this classic book about unleashing one's darker self to enjoy forbidden pleasures. I hadn't read the book since high school so this was a welcome treat. It's a bit on the short side for an audiobook but functions perfectly well.

I was given a free copy of the book at my request. I have provided a voluntary review.