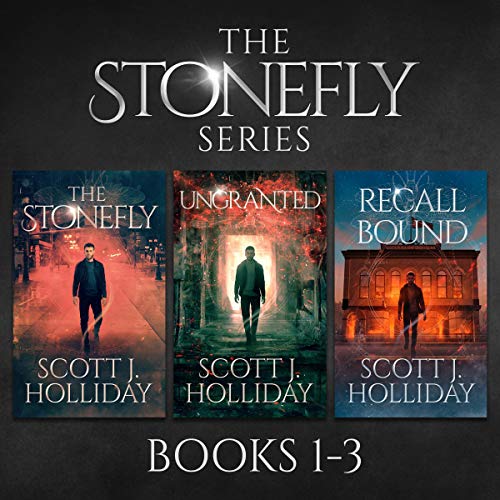 By: Scott J. Holliday
Narrated by: Todd Menesses
Try for $0.00

Books one through three of The Stonefly Series

Jacob Duke doesn't want to grant your wish - but if he doesn't, you'll be dead within six days....

Book One: The Stonefly

Jacob is bound by a mysterious curse he doesn’t completely understand. Now, in order to save an innocent boy, he must find and kill a man he’s never met.

But there is another killer lurking these city streets.

And Jacob is running out of time.

Bound by a powerful curse, Jacob Duke has six days to find a missing girl. If he can’t, her mother will die. But the girl doesn’t want to be found....

Layla is the lone witness to a high-profile murder - and being hunted by a hitman known only as The Sparrow.

As Jacob follows her trail through the seedy Detroit underground, he is thrust into confrontations with the police, organized crime, and a deadly assassin.

In a race against time, Jacob must overcome the forces that surround him and find Layla...before any more lives are lost.

An epic battle, centuries in the making.

And Jacob Duke, son of djinn, is the eye of the coming storm.

As supernatural elements continue to gather around Jacob, beings with hidden agendas are desperate to influence him. There are forces of evil at hand, and they will stop at nothing to bring about their vision of power.

The portended coming of Eschaton nears, and Jacob’s choices will determine his role in the final confrontation.

Now another mystery draws Jacob in, promising to further shape him as he is compelled to grant the wish of an old man with a forgotten past.

With nothing more to guide him than a photo of three young girls, Jacob is drawn to Michigan’s copper country...

...and a historic tragedy that reverberates through time.

Will Jacob grant the man’s wish in time to save him?

And what will be the consequences if he does?

The Stonefly Series is a captivating mix of urban fantasy and traditional mystery. It explores the true commitment of friendship and the moral conflict found within all of our souls.

What listeners say about The Stonefly Series: Books 1-3