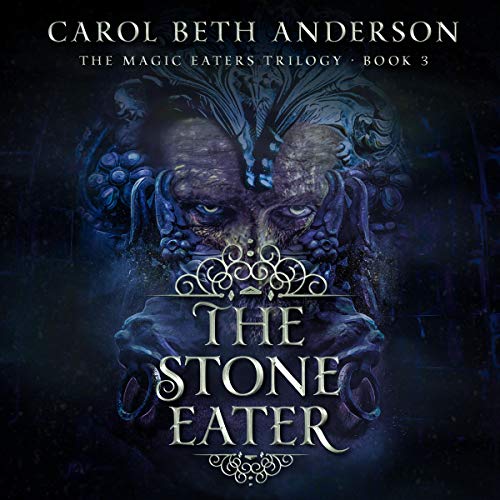 The exhilarating, romantic conclusion to The Magic Eaters Trilogy, a dystopian YA fantasy series like no other.

Can Nora take her father’s crown...before his dark magic takes her life?

Ulmin Abrios, King of Cellerin, has gone mad. He’s invading and terrorizing his own cities.

Princess Nora, his estranged daughter, is determined to seize the crown and save her people. Along with her boyfriend Ovrun and her friends Krey and Sarza, she secretly returns to Cellerin.

As she plots to take down her father, Nora wrestles with her desire to find love. She knows how confining life in the palace will be. Could Ovrun - or any man - ever truly embrace the restrictive life of a king?

Touring her land on a dragon’s back, Nora builds a vast team of supporters. But Ulmin’s mind is decimated by forbidden magic, and he’ll use any weapon, from torture to mental slavery, to protect himself. Even against his daughter.

With both the crown and her heart at stake, Nora must give her all to defeat her father. Otherwise, his tyranny will overwhelm the land...giving Nora no escape but death.

Buy The Stone Eater today and devour the final course of this epic series!

What listeners say about The Stone Eater

Long but Good Conclusion to Series!

This 3rd book takes what in Real life might happen with a attempted takeover. Nora really has grownup in this Series from a Spoiled naive Princess to a Possible Queen in both thoughts and Actions. Cray is growing up to and becoming the man he could be. There are so many characters in this Series that are meaningful and important to the books. This Book was a bit long winded, but necessary for the Final story.

The twists and turns of this series leaves your head reeling in the best possible way! You can relate so easily with the characters and some of the trials they face, yet so much imagination has gone into the creation of this world, you almost wish it exists! Loved it!

For the love of your country!

Great story! What would it feel like to have to take the crown from your father! The fighting will love win in the end! Narrator was good!

Nora and her friends have been running and hiding, but time is running out - King Ulmun's reign is quickly turning to one of terror, and he has barricaded himself in a fortress of stone. New allies and revealed secrets about the magic that decimated their world may just hold the key to his defeat. But can she destroy her father's rule and still stay true to herself? Supremely satisfying conclusion to a series that has played by its own rules from the beginning.

I loved the way so many plot elements circled back and echoed events from the beginning of this series and highlighted just how far these characters have come and how much they have grown. It is rare to have such depth of character development in this large of a cast. The juxtaposition between Krey and King Ulman and their very different paths was so well done too. As with previous books, this one was interspersed with flashbacks that helped round out the current situation.

This book had quite a bit of romance - along the entire spectrum. What stood out to me about the romance in this book though was that the focus was not on the physical attraction (though it did get a bit steamy at times) but on the deeper relationships that the characters have forged through this series and above all on their understanding of themselves and that relationships are a give and take. Also the sometimes brutal honesty, and other times deep vulnerability that healthy relationships require. Lots of love that isn't romantic too - and the acceptance of all kinds of love. It was a huge theme in this book, even at the crux of Ulman's story, his descent into madness, and his ultimate fate. Redemption, acceptance, and healing were profound themes in this one. Some characters screwed up - big time. Others came from broken, abusive pasts. But they all became better and stronger together.

This is the third and final book in the Magic Eaters Trilogy. These books must be read in order. They build on each other both chronologically and in depth. Highly recommended for readers who enjoy character driven fantasy with a bit of dystopian sci-fi mixed in and a lot of adrenaline pulsing action. The audio version is narrated by the author who does a wonderful job bringing these books to life. I like hearing where she puts the emphasis and emotion - it adds another wonderful layer of depth to the story. This an an honest and voluntary review of an ARC

This is a great follow up to book 2. The characters are still amazing and the story flows. I highly recommend this series...

Great conclusion to the trilogy

You know, when you’re picking up the next book in a series, especially when it’s been a year since the last one, it takes a chapter or two to catch back up on the story line, characters, relationships, etc. But boy, once I refreshed my memory, the story took off and I could not put it down, especially the last half of the book.

There’s so much to love and magic (as well as magical creatures) to discover and explore. You really can’t go wrong with dragons and unicorns! I really appreciated that the author allows us to feel love, hate, sadness, heartbreak, happiness, and grief; she doesn’t shy away from the hard stuff. Overall, I can highly recommend this book (and entire series), and not just for YA readers, I’m not young by any stretch.

I anticipate reading many more books by this author in the future. And can we talk about the cover?!? Not just this book, the whole series! I’m often drawn to books just by looking at the cover and this is definitely one of them! I would pick this one up to read the synopsis for sure.

Overall an enjoyable series. Fast-paced, likeable characters. I love that the author is also the narrator. She does a great job. Listening to the audio, I did get a little confused on some characters with similar names but I still enjoyed it.

This was just as wonderful as the rest of the series. Imaginative, entertaining and enchanting. The characters and world building are top rate in this classic good against evil fantasy series. Delightful reading. I received a free review copy of the audio version of this book in exchange for an honest review.

A couple of twists and turns, but definitely a heart-wrenching story. This continuation has a lot more of Nora's father's perspective. The pain of the conflict and all the love that gets twisted is at times hard to hear, but it has a very happy ending.

The ending to a series is always bittersweet! So many things you have been wanting to see for books finally happen! But so many things you didn’t want to happen, happens as well! If you are a fan of this series you must find out how it ends!!

An amazing end to a great trilogy

4.5 stars
I’m still processing everything that happened in this book. And it was a lot!
This was a great book. Great story, great writing, great cover (I really like all the covers in the series!). I was expecting a great end to a series. I got it. And more!
Interesting, important things to think about, lots of things to highlight and underline, difficult relationships, lovable yet sometimes stupid characters, more dragons, unicorns (I think I highlighted every time they appeared because I was so excited!), more magic, battles and their aftermaths and I could go on for a long while.
The author made some unexpected bold choices and, although it took a while to get used to them, I think I agree the story was better this way. Also, more close to real life in a way because the unexpected happens and not everything that ends in a pretty bow starts that way.
This is probably a little ramble-y but it is because I really liked the book so much.
I listened to most of this in audiobook and read the rest. The book is read by the author and, if you listen to audiobooks, you should give this one a try because it was really well done and gave even more life to the story.
All in all, a very good book in all aspects you could ask for. I’m seriously pondering ordering physical copies of the whole series so I could have them all and have another excuse to read everything again. Also, I’m chastising myself for not having read the prequel yet. I think I just don’t want the series to end.

I received an ARC of this book as well as an audio copy from the author. All opinions are freely given and my own.

Nora and her friends have come a very long way sin

Nora and her friends have come a very long way since the first book. Now they have built allies and made numerous plans but whether they are strong enough to defeat the King is still in question.
Throughout the book there are snippets of letters from Nora's mother. It was lovely to get something from her perspective, as a young girl meeting her possible future husband, the King. It's quite a long book but you do feel like there is always something happening and you get invested in the lives of the characters. I really have to sympathise with Sarza's character in the book. Considering the huge job they have, trying to overthrow a mind controlling, super-powerful King, most of the other characters do spend a LOT of time talking about their girlfriends and boyfriends. If they cut out most of the love angst I would have enjoyed the book a lot more.