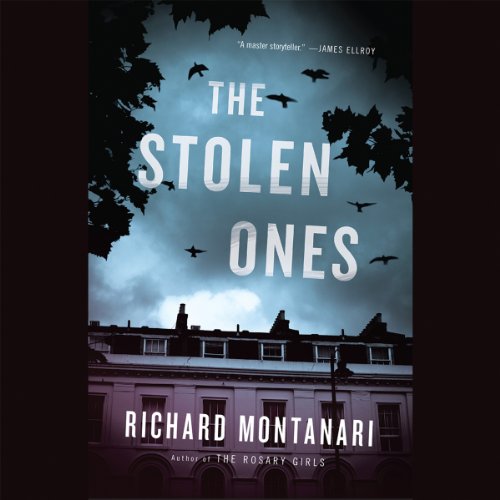 By: Richard Montanari
Narrated by: William Hope
Try for $0.00

In Richard Montanari's chilling new suspense tale, a sealed-off network of secret passages connects all of Philadelphia to the killer hidden within.

Luther Wade grew up in Cold River, a warehouse for the criminally insane. Two decades ago the hospital closed it doors forever, but Luther never left. He wanders the catacombs beneath the city, channeling the violent dreams of Eduard Kross, Europe's most prolific serial killer of the 20th century.

A two-year-old girl is found wandering the streets of Philadelphia in the middle of the night by detectives Kevin Byrne and Jessica Balzano. She does not speak, but she may hold the key to solving a string of murders committed in and around Priory Park.

As the detectives investigate, more bodies are found at Priory Park, and they're drawn closer and closer to the doors of Luther's devious maze and the dark secrets of Cold River.

What listeners say about The Stolen Ones

Good book-would have been better with Scott Brick

I don't know what is going on with some of my favorite authors these days. They come up with a winning author/narrator combination and then they switch narrators. All of Montanari's previous books have been narrated by Scott Brick who I thought performed them perfectly, Why the change to someone else?

This was really a good book. Richard Montanari's Bryne/Balzano team is always an exciting roller coaster of a book. From page one the listener or reader is on the edge waiting to find out "who done it". This book however gives one final shock at the end. When I thought the book was finished and was listening to the epilogue wrap everything up the last line in the book BLEW ME AWAY!!!! I had to go back and listen again, I could not believe what I was hearing. I will not spoil this for anyone and don't get me wrong, the rest of the book is good but this was GREAT!!! It's worth the credit.

Would you listen to The Stolen Ones again? Why?

I would 100% listen to this novel again. It was as I said, totally awesome. Twists at ever turn, and you are guessing until the end. The narrator in my opinion is also very good-- he actually does the voices of the characters pleasingly AND when he speaks as the criminals, he is haunting!

I could almost guess what was happening, but then I would be wrong. It was highly entertaining and creepy. You could also relate to the characters on an emotional level since they are quite likable which makes the storyline even better.

I was in shock! And it kept me up some nights since the thought of how the murderer reached him victims was just utterly terrifying to me.

Read it! But maybe not when you have to get to bed early.

The story was overall good. Not to much rehashing over Colleen & Jessica's lives. However, how in the world could every single character sound bored in the story. Another, thing that bugs me about the character Colleen is they never said she was a deaf mute....so why not gave her some type of voice. Yes, yes I do know how someone's voice sounds that was born deaf but if she could have said some things as a child growing up that would have been really cute. Since, every book had to rehash her life. Overall, the series did bore in certain places when characters went on monologues however, the series all together deserves a 4.

Narrator and Producer ruin this one

Did The Stolen Ones inspire you to do anything?

Stay away from this producer

The narrator is capable, but the producer allowed him to pronounce words like City as "Sit-tee" (sometimes - other times he got it right), Conshohocken as "Chonshowken" and compost as "compahst". If you are going to take a producer credit, then that's your fault. The narrator shows he is capable and his various accents are good, but such blatant inconsistencies really take away from the story. It's the narrator's job to read ... not to be smart. That's the producer's job and this one failed.

Not one of his best.

The story was along the same vein as other books in this series and the story was pretty good but the narrator killed it for me.

Not the best from the series

I miss Scott Brick!!! The narrator had some “interesting” pronunciations among other things. It was difficult to follow the plot at times; there were a few too many storylines and flashbacks.

Looking forward to listening to the rest of the series with Scott Brick.

I enjoy this series and during this pandemic I'm listening to many of my books again. This is a good story but the narration is terrible. Scott Brick had been reading the series and it was fine. Not only is this narrator slow, he has mispronounced so many words...it just makes me crazy. Other than that a good book; glad Scott Brick is back for the last 2 in the series.

The book had a good ending but it was really confusing. If I wasn’t such a fan of the author I would’ve given up and returned it. The narrator was not a good fit for this book. I wouldn’t recommend it.

Narration was a problem for me

The narrators voice for Burns drove me crazy. Had trouble listening for long periods of time. Rest of narration was okay. Prefer Scott Brick like all the rest of the series. Otherwise the story was excellent.

I love his books. I have every book he
has written. If you like stories that sometimes haunt you, long after you read them, try Richard Montana's and you will be hooked.