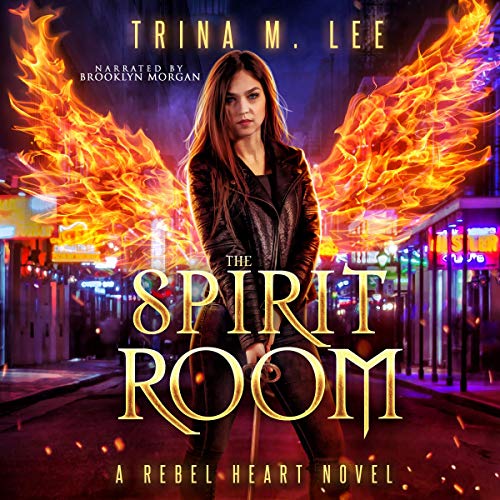 When the dark wants something, they go to any length to get it.

Fiery nephilim, Spike, is discovering where she stands in the war between angels and demons. When a rock scene girl turns up dead, Arrow is blamed for the crime even though he has no memory of the murder. Rowen insists Arrow is innocent but Spike fears the worst. Once she gets involved the unsettling truth is revealed.

Something big is coming. Something that has the city’s dark forces more desperate than ever to have Rowen as their own. They’re willing to destroy Arrow and anyone else who stands in their way. Even Spike.

What listeners say about The Spirit Room

repeats so often and so annoying. don't know what the problem is. made listening a real chore!

Great story telling, fun twist on paranormal and rocker romance. Action, drama, lots of emotion. Author does a good job world building and pulling you in. I would suggest reading the first book in this series. The narration was very good and made listening easy and enjoyable.

I loved it! The narration was excellent and kept me entertained! The author did an excellent job with the character builds and plot. I look forward to reading the next book in this series! I was given this free review copy audiobook at my request and have voluntarily left this review.

I'm glad I had a chance to listen to this audiobook, it's wonderfully written, well-plotted, engaging, and wholly entertaining. I love how the series is progressing, and the characters are growing. The storyline is fast-paced, action-packed, thrilling, and even emotional. I'm definitely invested in the series, particularly the characters.

Outstanding narration by Brooklyn Morgan. She portrayed the characters' personality, mood, and emotions very well, bringing them to life. I enjoyed everything about this audiobook, one I'll highly recommend. I was given a free copy of this audiobook at my request and have voluntarily left this review.

A great second book in a promising series

I liked the first book which I read on my kindle. The characters continue to be we developed with obvious direction and thought in their place within the story. It's also very relatable even though they have supernatural abilities.

It was great to see the characters that I saw run the first novel develop further. I felt at home straight away, although it would equally be easy to jump in at this point with no struggle. The author has done a good job in crafting the world, the story and the characters. I really liked it, it was it was an action packed, emotional rollercoaster that kept me wanting more.

The narration was also great. It helped draw me into the story and keep me going and keep me wanting more!

I loved this book, it was an action packed, emotional rollercoaster that was impossible to put down. I was hooked from the beginning, swept into the amazing world of angels vs demons, I couldn't help but be emotionally invested in Spike, Rowan & Arrows struggle. I can't wait to find out whats next for them in book 3, and hear more of Brooklyn Morgan's expressive narration.