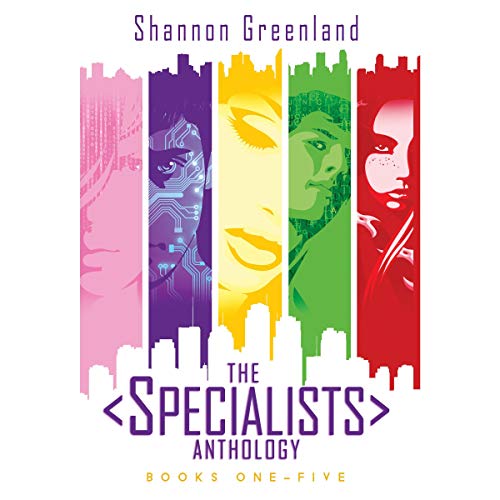 By: Shannon Greenland
Narrated by: Mary Huff
Try for $0.00

This includes all five books in the best-selling, award-winning teen spy series The Specialists. With thousands of five-star reviews on Goodreads, it's full of intrigue, adventure, bad guys, fun gadgets, espionage, and romance!

Girl genius GiGi is in a lot of hot water. A whiz with computers, she agrees to help her college RA, David, uncover some top-secret information. After all, she doesn't have family or many friends, and David has always been nice to her. It doesn't hurt that he's super cute and irresistible, too. All she has to do is hack into the government's main computer system.

But a few hours later, her whole life changes. She is caught and taken in for questioning, only this isn't your run-of-the-mill arrest. Rather than serve a juvenile detention sentence, she accepts the option to change her name and enlist in a secret government spy agency that trains orphaned teens to go undercover.

As if that wasn't overwhelming enough, she discovers that David works for this agency as well! And before she even begins to understand what is going on, she's sent on her first mission as an undercover model. And who better to partner with than David himself! But can she pull this off, or will she lose the only family she's come to know?

What listeners say about The Specialists: The Complete Teen Spy Thriller Series

I loved the series. I listened in my car and looked forward to driving to hear more. I highly recommend. Good clean fun with intrigue and excitement.

Good, but the recording was a little off

I enjoyed the story, but the recording had fuzz in the background throughout the whole audiobook. It was bearable, but a little annoying. The story and characters were fun, though.

I read the first four books in this series when they first came out, but for some reason never finished. Luckily I was able to find them again, and they did not disappoint. Hearing them as audiobooks was really nice, narrator’s voice definitely could have been GiGi’s.

great story, some bits predictable but still enjoyable. Narrator has annoying high pitched monotone voice. Could only listen to story in short bursts as a result of narrator.