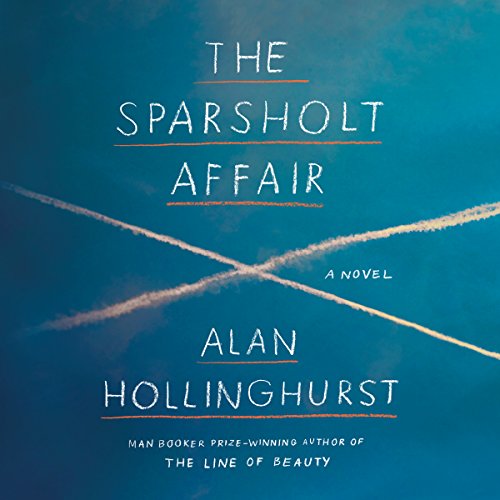 By: Alan Hollinghurst
Narrated by: David Dawson
Try for $0.00

From the internationally acclaimed winner of the Man Booker Prize, a masterly new novel that spans seven transformative decades in England - from the 1940s to the present - as it plumbs the richly complex relationships of a remarkable family.

In 1940, David Sparsholt arrives at Oxford to study engineering, though his sights are set on joining the Royal Air Force. Handsome, athletic, charismatic, he is unaware of his effect on others - especially on Evert Dax, the lonely son of a celebrated novelist who is destined to become a writer himself. With the world at war, and the Blitz raging in London, Oxford nevertheless exists at a strange remove: a place of fleeting beauty - and secret liaisons. A friendship develops between these two young men that will have unexpected consequences as the novel unfolds.

Alan Hollinghurst's new novel explores the legacy of David Sparsholt across three generations, on friends and family alike; we experience through its characters changes in taste, morality, and private life in a sequence of vividly rendered episodes: a Sparsholt holiday in Cornwall; eccentric social gatherings at the Dax family home; the adventures of David's son Johnny, a painter in 1970s London; the push and pull in a group of friends brought together by art, literature, and love. And evoking the increasing openness of gay life, The Sparsholt Affair becomes a meditation on human transience, even as it poignantly expresses the longing for permanence and continuity. Witty, tender, epic in scope yet rich in observation, this is a dazzling novel of fathers and sons; of family and home by a writer hailed by The Wall Street Journal as "one of the best novelists at work today".

"Masterful - written in elegant, captivating prose. The story sweeps along in five interlinked sections, in which the characters move through different stages of their lives and their country’s history. Hollinghurst shines a clarifying light on the gay and art worlds through decades of British cultural and political change. In this magnificent novel, Hollinghurst is at the height of his powers." (Publishers Weekly)

"Thrilling; fascinating...a novel full of life and perception. A man’s inability to be honest about his sexuality has scandalous, and brutally public, consequences for several generations. Hollinghurst tracks the vast, transformative changes in gay life over many decades. Part of Hollinghurst's bold talent in this novel, as in his previous work, is to make it evident that lust, sex, and who does what with whom in the bedroom (and even how) are fitting, and insightful, subjects of literary fiction." (Kirkus)

"David Dawson is masterful with dialogue, and there can be no better qualification for the narrator of this vast and engrossing audiobook.... Dawson's ear for personality, class, regional speech, and the accents of different periods is uncanny. An impressive performance." (AudioFile)

What listeners say about The Sparsholt Affair

I am a huge fan of Alan Hollinghurst and think this is his best book, so far, although I loved The Line of Beauty too. The rich detail of the telling of this story comes through beautifully.

The narrator was excellent. His ability with different voices was superb and enriched the experience of reading this book. Bravo!

henry james improved for our age

the prose is so stunningly fine it takes your breath away....i have read all of his work and i find this is his finest

What other book might you compare The Sparsholt Affair to and why?

Which character – as performed by David Dawson – was your favorite?

A captivating look at love, loss, and identity throughout the generations

Alan Hollinghurst plays narrator and omnipresent observer in the lives of a multigenerational cast of characters. Providing a look at the subtle nuance of being gay and in love at the cusp of World War II to the era of instant gratification and casual encounters brought forth by technology. You'll find yourself evolving alongside the narrative, being dropped head-first into each era as a transplanted observer. Hollinghurst leaves timelines blissfully vague, allowing you to discover more as the story progresses. The Sparsholt Affair will keep you surprised, engrossed and begging for more. The narration from David Dawson gives each character flavor and a sense of reality, adding to the rich complexity of the story. Overall, this has been my favorite audiobook experience and I look forward to listening again! This book and performance is well worth your time.

This is an enchanting novel with a superb narrator. I didn't want it to end!

Wonderful long view of the gay life in the UK

The main reason why I chose this novel was because it promised to take a long view of LGBTQ life in England from the war years through today.  With the exception of those war years, it's a time I lived through, and as a long-time ally, as well as someone on the queer spectrum as an Ace, I'm fascinated by accounts of the changes in society and how they affected the gay community. And The Sparsholt Affair does work as that kind of history.

It begins with a time when homosexuality was illegal, but in some quarters more tolerated. The narrative begins with a diary kept by Freddy Gray and focusing on a young man who has come down to Oxford to study while waiting to be called up.  The young man is David Sparsholt, and he is rather godlike to many of the other undergrads.  He's tall, muscular, and handsome, and several of the young men and women in Freddy's circle court him.  Peter Coyle draws him, Evert Dax falls in love with him. And Freddy is fascinated.

The story moves to the sixties, to David, his wife, and his son Johnny, who is smitten with a young French boy one summer. Though there is some reciprocity on Sebastian's part, it's pretty clear it's just that he's an-any-port-in-the-storm type and prefers girls.  But the disappointment of Johnny's summer is nothing to the scandal that breaks around David who is caught in the act with two other men, one an MP.  We learn, as the novel progresses that David spent 5 years in prison for this.

Flash forward and Johnny is now living in London and working as an art restorer as he works toward becoming a portrait painter.  He's taken up by the people who orbit Evert Dax (including Freddy), falls in lust with Ivan, who prefers old men, engages in sex with strangers in lavatories, and tries not to think about his father's fall from grace.

Johnny is the central character of the novel, but I think it's safe to say that David is the heart of it. He is the person who connects all of these other characters in one way or another.  His is the story that keeps being relevant to everything that happens in the book, and in society.  In each era, in every even that Johnny participates in, we understand that what happened to David was part of why Johnny  can live the life he does.

We understand that David not being able to express his sexuality, whether gay or bisexual, is certainly part of what informed the gay culture of anonymous sex. When you refuse to accept and validate who people are, you force them into niches where they can be themselves, but outside of accepted social channels.

But the book works just as well on a more personal level when we come to understand how little we can ever know another human being.  It doesn't matter if it's a partner, a child, a sibling... we are simply not capable of knowing them fully.  And by pairing Johnny's experience of his father's death, with his interactions with his daughter, Lucy, before her wedding, we understand that all we can truly hope for is time to come to know them better, and the will to listen, to pay attention to who they are, and love them for it.

Rarely does the reader so perfectly present a complex story filled with wonderfully written characters.

love the characters and the story, beautifully done. the transitions were fantastic, could close my eyes and picture it all in my mind.. thank you.

The author writes well however the context is boring and certainly lacks variety and interest.

Didn’t want it to end.

I really enjoyed this book. The narration was excellent- all the voices and dialects very believable. Like some other reviewers, I didn’t want this book to end. I kept the speed at 1.0 the entire book to savor it.
Beautifully written. Interesting and well developed characters.

David Dawson gives life to the words that Alan Hollinghurst strung together so beautifully. I would probably never read this book but I’m already listening to it again.