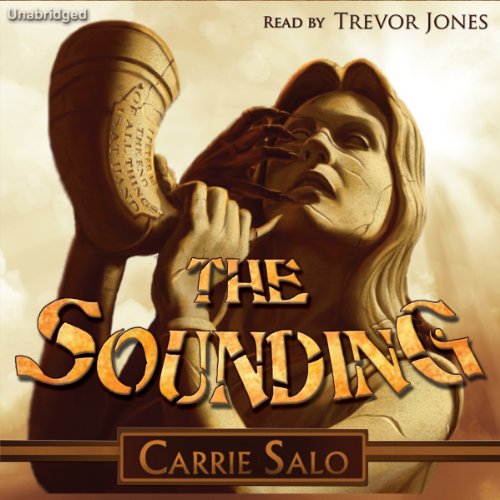 By: Carrie Salo
Narrated by: Trevor Jones
Try for $0.00

In the Book of Revelation, a man named John has a prophetic dream. He dreams of the final prophecies that will come to pass - and the seven archangels that guard them. Each angel waits to sound their trumpet at God's appointed time, preparing humanity to fight and win the final battle. Two thousand years later, Father Chris Mognahan is a member of the Hetairia Melchizedek, a secret society within the Catholic Church that studies Biblical omens. The society asks Chris to investigate an unusually grotesque crime - a murder on a college campus where the killer's hand literally burned off the victim's face. While the killing seems isolated at first, the society ties the murder to the final Biblical prophecy and a terrifying omen that the order of the prophecies is about to be disrupted. The final battle is coming too soon - long before humanity is prepared to win it.

What listeners say about The Sounding

I'm usually not a fiction guy, but the tie in to the apocalyptic scenario from the Book of Revelation sucked me in, tho this is not a religious book. I always wonder if that stuff will happen during my life time. I'm not Catholic, but this fictional and supernatural inside look on the Catholic church was pretty amusing. I would listen on my drive to and from work, and really looked forward to my drive time.

The narrator brings the story to life and does a fabulous job portraying the wildly different characters - everyone from a college girl to the Pope. You forget that it's one guy doing all the voices.

I connected with the characters, was totally shocked by the twist, and ultimately, freaking loved the story.

If you could sum up The Sounding in three words, what would they be?

The story grips and the characters draw you in.

Which character – as performed by Trevor Jones – was your favorite?

If you could take any character from The Sounding out to dinner, who would it be and why?

I'd love to take out Francis but if I told you why, it'd spoil the story.

Couldn't finish and returned this book.

The narrator was terrible, very flat. In fairness though, he didn't have much to work with as the dialogue was stilted and every character was the same. This book is heavy on Catholic teachings-so much so that it felt like Sunday School in some places. Convoluted story that didn't inspire any interest. Interesting premise that was poorly executed.

This was a very great listen & I wished it could have been drawn out with more details.
One thing I have any issue with & that's the recording itself. This book repeats itself at least 6 times while playing. I kept looking at the app to see if I'd inadvertently touched it or something like that.
I download in multi-part instead of full book. One time is acceptable but it happened about twice per part, 6 times.

What made the experience of listening to The Sounding the most enjoyable?

Chris because he was tempted,but kept his faith and vows

Have you listened to any of Trevor Jones’s other performances before? How does this one compare?

No, but he makes you feel you are a part of the story

If you could rename The Sounding, what would you call it?

It's a great title as it is

A great religious thriller very well written,and keeps you on the edge of your seat. I hope another one is in the works

Not was I expected

What disappointed you about The Sounding?

The narrator sounded very robotic. The story was very, very slow. Some parts were interesting but I wouldn't recommend. The dialogue didn't sound natural between the characters.

Has The Sounding turned you off from other books in this genre?

Yet another audio book that has many repeated passages. Don't they edit these books? Does anyone listen to them other than the paying public? The story was predictable and the narration was poor, making sentences sound very strange at times. Don't bother with this.