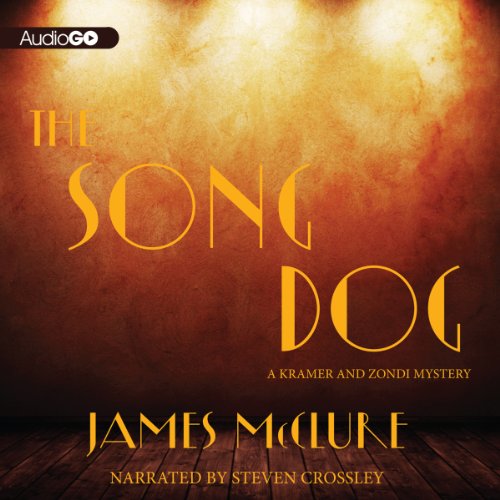 The year is 1962. Young Lieutenant Tromp Kramer of the Trekkersburg Murder and Robbery Squad has been ordered up to Jafini, a small, dusty town in northern Zululand, to investigate the "hero’s death" of the town’s chief detective, Maaties Kritzinger - another Afrikaner maverick, and one with many secrets. Kramer finds himself increasingly identifying with the victim as the investigation proceeds.

And then his path crosses that of Bantu Detective Sergeant Mickey Zondi, who is trying to locate a multiple killer whose summary execution will quiet the spirits of his ancestors. Despite the racial differences, the two men sense a kinship…one that might prove dangerous in rural South Africa in the year of Nelson Mandela’s imprisonment.

What listeners say about The Song Dog

Start With Song Dog in This Series!

Terrific African mystery series written in the 70's during Apartheid. It is not about Apartheid directly but the characters and situations portrayed reflect the attitudes of racism, social conventions,personal opinions and bonds of these police procedurals as a sign of the 70's...not unlike contemporary society regardless of politics and or being politically correct (PC).
The story lines are unique mysteries, the writing superb; you are there in Africa!
Song Dog explains the gaps in details of the partnership of detective and his sergeant. It was written in 1991 and McClure's last
novel due to his unexpected death at age 66.
I happen to enjoy Steven Crossley's narrations and was not disappointed.
Audible does not have McClure's complete series but what is available, will whet your appetite to read the others! I ordered used paperbacks and will listen again to the five in my library!