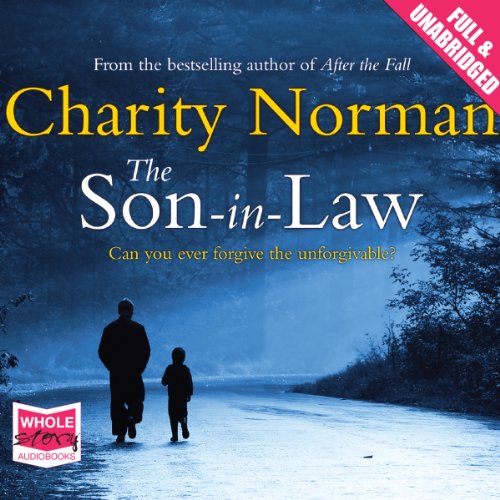 From the author of the Richard & Judy Book Club pick After the Fall comes another enthralling novel.

On a sharp winter's morning, a man turns his back on prison. This is the story of Joseph, who killed his wife, Zoe. Of their three children who witnessed the event. Of Zoe's parents, Hannah and Frederick, who are bringing up the children and can't forgive or understand Joseph. They slowly adjust to life without Zoe, until the day Joseph is released from prison...

"Will appeal to devotees of Joanna Trollope and Jodi Picoult... [Norman] is hot on their heels." ( Daily Mail)

What listeners say about The Son-In-Law

One of my favourite books of the year

I listened to this book over 2 days and really did not want it to end. It is certainly one of my favourite listens of the year. It's the kind of book that I want to share with all my friends and then feel envious that they still have it to look forward to! I found it absolutely compulsive and believable. It is well researched, excellently written and narrated and I empathised with all of the characters and felt that they became a part of my life. Highly recommended.

The best thing about this audio book for me was the narration which is absolutely superb.

The story itself was ok and I expected more somehow from it's reviews... I found it mostly predictable and just a bit too tidy... an ok enough listen but nothing about it made me wow.

Would you listen to The Son-In-Law again? Why?

No, I wouldn't listen to The Son-In-Law again as I generally don't listen to a book that I've already read as I know the ending but I will recommend it to everyone I know!

Scarlet and Joseph. It is hard to choose between these 2 as they were so different yet both so compelling.

They were so real. The narration in this book was the best narration I've ever heard in a book, they brought the characters to life, I felt like I was listening to a play rather than a book and felt as if I knew the characters personally, I could almost see them, they brought each scene to life and I could visualise the scene and situation that they were in and feel their anger, sadness, guilt...

Yes, to use a cliché - it was hard to put down!

I don't write reviews in general. I am an avid reader and read (or listen) to 2 or 3 books per month. I have written 1 or 2 reviews in my life but only for books that have really moved me. This book moved me beyond belief...I laughed out loud, I cried, I had goose bumps! The story is moving and real. It is a sad story of family breakdown, a dilemma that, no matter which way you look at it, is really hard to solve. One minute I was on Joseph's side, the next on Hannah and Freddie's and always on the side of the children. Some reviewers have said that the ending is predictable, I don't agree. Some have said that the romance element was unnecessary, I don't agree. I have found that in so many books - the love interest tends to be irrelevant and predictable but, in this book, I felt that it served a purpose; to portray the gentle, loving side of Joseph and to challenge his view that he wasn't worthy of a woman's love, it created another mini dilemma for him and the reader. The Rosie storyline created a distraction from the serious family issues and the character of Rosie was forgiving and caring and both her forgiveness and Joseph's love for her gave him some retribution.

The children in the book were amazing. The reader could feel their sadness and guilt, their feelings and behaviour towards their father was justified and natural, given the facts . Ben's behaviour towards his father were unpredictable but true to life, not everything can go as planned. I also loved the character of Leicester, a great touch, even he was torn in his opinion and obviously came to love the children, he showed great humanity towards them.

A moving, thought-provoking, emotional roller-coaster of a book that I will highly recommend to all of my friends. I finished the book yesterday and am sad to have finished it, I miss Scarlet, Theo and Ben already. A must read.

This far out-ranks Charity Norman's After the Fall. I found that forgettable, but I'll remember this one. When Joseph, who killed his wife, is released from prison, the deeply distressing issue of what happens to his children forms the focus of the book, and seeing this from different points of view is thought-provoking. Having four narrators enhances the different perspectives.

Some Amazon reviews have hinted that elements of the book are predictable. Yes, some are to a degree, others far less so. Regardless of that, I was gripped by the unfurling of events in the lives of those who are, in the main, fairly ordinary people who find themselves in extraordinary situations. This is not a book about mental health, though one aspect I shall remember for a long time is the description of living with someone with uncontrolled bipolar disorder.

I'm not often emotionally moved by a book, but this one did it for me. A great listen!

What disappointed you about The Son-In-Law?

The plot was very long drawn out and seemed to take ages to get to the point. The story seemed to unfold very slowly, with different parts emerging in drip-feed fashion. I found myself getting bored and tuning out at frequent points while listening. Although there were 4 narrators, the accents of the 2 females (Hannah and Scarlett) were very samey and the interpretation of other characters by the narrators didn't vary enough from their usual voices (I have heard more varied accents/interpretations in books read by just one actor). For instance Rose (from Devon) didn't sound even remotely West Country and the solicitor just sounded like Hannah. The overall story line was relentlessly depressing, with the actors sounding either bitter, miserable or angry most of the time. This made it a grim listen for most of the book.

Has The Son-In-Law put you off other books in this genre?

It wouldn't put me off the genre, but I'd not be motivated to read any other books by this author.

If you could play editor, what scene or scenes would you have cut from The Son-In-Law?

I don't think I'd cut out any one specific scene, but I think I would shorten the book considerably to make the plot more pacey. I would also inject a few more positive / happy scenes throughout the book so that the general atmosphere is less gloomy.

I loved this book, ive listen to many and find it hard to find books that keep me wanting to listen but this is one of those.

Another hit from Charity Norman!

Would you consider the audio edition of The Son-In-Law to be better than the print version?

This audio version truly brings this story to life; each character having their own voice makes the narrative flow easily. Thus the book doesn't succumb to a stilted kind of storytelling- a fate which befalls many a novel told in multiple characters.
I would highly recommend it, along with Charity Norman's equally compelling audiobook "After The Fall"
:-)

What made the experience of listening to The Son-In-Law the most enjoyable?

I thoroughly enjoyed all of the book. The gradual demise of Fredrick and how he kept his dignity was put over very well

On listening to the opening chapters I was against the father having anything to do with seeing his children, but as the story unfolded I began to change my view. The scenes with Scarlet where exceptional . The author certainly new her subject when she wrote this book.I have never been so moved emotionally listening to a book. I feel myself at a loss to describe this book adequately .I can not believe how an author can put So much emotion into a book. Words fail me .Please give this exceptional book a try.Thanks Audible for having it on daily deal

I hoped this story would challenge me with a set of intriguing moral dilemmas. Instead I found it to be dreary and predictable. I do hope my other Charity Norman book is better than this.

Where does The Son-In-Law rank among all the audiobooks you’ve listened to so far?

Different. More than a just a tale. As much time spent thinking about it as listening to it.

I thought the characterisation was good. Sympathy with characters was switchable. There really was no real hero or heroine. These were real people, each with their own strengths and weaknesses. My general sympathy was with the murderer and anti the mother-in-law but the author was able to switch this at times. .

The whole book is very moving. A father who has lost a wife and children. A mother [and father] who have lost their daughter and want, what they see as, the best for their grandchildren. Confused children who have lost their mother and father. All these a good people, there are no baddies. We may think that they (who?) are misguided.

The author presents a problem without an easy solution. Possibly without a solution and we must form our own. My only question of the book was the introduction of a romance factor which, I felt, added an unnecessary complication. Perhaps the author realised this and rather abandoned it and I felt it added nothing. The extra character was interesting but added nothing to the essence of the book. A thought provoking book, well constructed with sympathetic development of characters. Amazingly no evil characters we can blame, just ordinary people with an extraordinary problem

My heart hurts from empathy!

This book toyed with my emotions so much. Not often in stories do you fully understand the perspectives and emotions of all characters, but despite my own conflicting feelings (along with characters’ conflicting feelings) this boon encourages you to be patient and kind and put your own gut feeling aside to be able to see how things can impact others. Yet another excellent Charity Norman book.