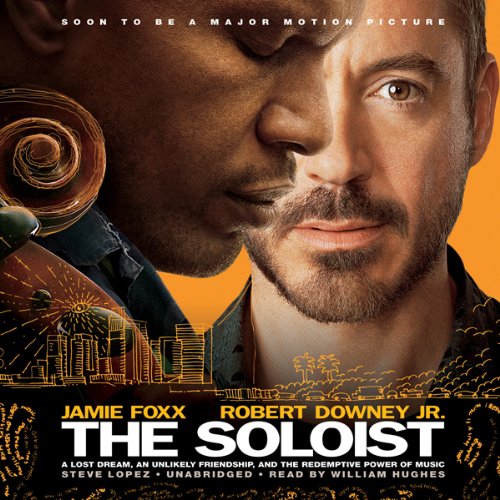 By: Steve Lopez
Narrated by: William Hughes
Try for $0.00

When journalist Steve Lopez sees Nathaniel Ayers playing his heart out on a two-string violin on Los Angeles' skid row, he finds it impossible to walk away. More than 30 years ago, Ayers was a promising classical bass student at Juilliard - ambitious, charming, and also one of the few African-Americans there - until he gradually lost his ability to function, overcome by schizophrenia.

Over time, the two men form a bond and Lopez imagines that he might be able to change Ayers' life. The Soloist is a beautifully told story of devotion in the face of seemingly unbeatable challenges.

What listeners say about The Soloist

This is one of the best audio books I've listened to in a while. Excellent writing, wonderful narration, and a terrific story.
The author provides a good perspective on how mental health affects lives and how one person can make a difference in someone's life.
It will tug at your soul, stretch your heart and bring tears to your eyes.

It is seldom that I choose nonfiction books, and when I do I am often disappointed. Not this time. I haven't seen the movie . . . doubt if I will . . . they usually come no where near the book. I am one of those people who have really been angered by the laws which put the mentally ill out on the streets many years ago, when "in their best interest" the mental institutions were eventually all closed down, along with all the other institutional placements for the severely handicapped. You see, I am the mother of a severely mentally retarded, severely autistic adult, who only through the grace of God, lots of work on our part (mine and my husband's), and constantly advocating for her, is now in an appropriate group home close to us, where she is safe. Mental illness is very different. But I'm not entirely sure that we've done these precious people any service by closing all the facilities which once housed them. There are so many ethical questions, so many questions of safety, not only of the mentally ill themselves, but that of the family members who spend years trying their best to care for their loved ones, many of which end up injured and sometimes killed by the person they are trying to take care of. One of the saddest stories happened here in Alabama when a teenage boy killed both his parents, and severely injured his siblings, several years ago. This family could not get any help from authorities or physicians, because the boy "had not actually harmed them" YET. The Soloist is a hauntingly beautiful, deeply moving story of a gifted musician who is unable to make health, cleanliness or other basic choices in life. Therefore he is "free". But everyone around him, everyone who loves him is TRAPPED in a vicious cycle of needing to help him, of continuing to hope, and of fighting the illusion that he CAN be helped. Nathaniel Ayers life has VALUE. God created Nathaniel. God created our sweet daughter. What we learned, over many, many years, is that God also created these special people to be adults, in whatever shape or form that is. And that God releases us, as their parents, as their caretakers, to also take care of ourselves. I fear that our society and our nation have not done well by those who truly need help the most, and cannot help themselves, while continuing to subsidize those who are ABLE BODIED. And the answers are not simple. But they are WORTH seeking.

If you could sum up The Soloist in three words, what would they be?

Knowing that Nathaniel was still able to play beautiful, classical music with string instruments and the piano, gave me internal peace and such happiness for Nathaniel. When Steven Lopez first noticed Nathaniel playing classical music with his not so perfect violin, while on a street corner in the city of Los Angeles, he saw a story for the newspaper. However, he found himself taking an interest in Nathaniel as a man and a friend. Steve worried about Nathaniel and worked with him and the system to find a place for him to live with supervision. It was a struggle for Nathaniel to come in off of the streets and live in a place of his own. He did not like living with the rules that govern society. He had lived on the streets for almost 35 years. Steve had to come to terms with the power and limitations that schizophrenia had over a man such as Nathaniel. There was no certainty that Nathaniel wouldn't leave the apartment and live on the streets again. Nathaniel was unpredictable but Steve had found a friend and realized that he would have to continue to learn to accept him as he was.

I did not have an extreme reaction to this book.

Schizophrenia usually presents itself from a person's late teens through their early twenties. There is medication that can help the schizophrenic stabilize the voices that they hear, medication that is helpful in decreasing a person's psychotic episodes as well as their paranoia. However, even when a schizophrenic takes his medication daily. as prescribed by his physician, he will have break through episodes that do require hospitalization until stabilized. The schizophrenic is never symptom free. However, not all schizophrenic's live how Nathaniel lived. The deinstitutionalization of some of the mentally ill patient's, with many different types of mental illness, back into society was not good for the patient's themselves. Saving money was the issue, not providing "freedom from an institution." Not all of them knew to take care of themselves, even though the social workers found placement for each patient who left the hospital. They walked away and started living on the streets. Therefore, some of these people are now part of the homeless, who live in the cities all across America. Nathaniel managed to survive on the streets with schizophrenia but I think retaining the ability to play his music was awesome. Having someone such as Steve Lopez becoming involved with Nathaniel, as he did, was a miracle, if you believe in miracles. I was very happy that Steve finally learned to accept Nathaniel as Nathaniel.

What made the experience of listening to The Soloist the most enjoyable?

The story was remarkable.

What was one of the most memorable moments of The Soloist?

The most memorable moment was when Mr. Lopez went back to Nathaniel after he threatened his life.

Which character – as performed by William Hughes – was your favorite?

My favorite character, as performed by William Hughes, was Mr. Lopez.

I was moved when Yo-yo Ma put his arm around Nathaniel and said they were brothers.

I rarely revisit a book twice, but I'll keep this one on my list for a second go.

A quick listen. It is moving and shows the toll schizophrenia takes on a life and the life of a family. It also reminds us we are who we are and that may be just fine. The soul can endure even when the mind is ill.

Stories like this open our eyes and remind us that there are people all around us who struggle with enormous challenges; and that sometimes we CAN make a difference. The author gets drawn into the mysterious life of a homeless man and is forced to confront not only the problems that get people to that situation, but also the choices and forces that keep them there. He learns much about mental illness, but can he get the man off Skid Row and help him deal with his problems and reclaim his rare gift of music? Well written, fascinating topic, and a true story to boot. Just published this year, and already there is a movie version in production. Listen to the book first before the movie spoils it for you!

This is an incredible book. The hopes and expectations of Mr Lopez remained all the while Mr Ayers tested (knowingly or unknowingly) Mr Lopez time and again.. This book is mesmerizing.

I loved the movie but I had a hard time getting through the audiobook. It is an interesting true story, but kind of long-winded and repetitive at times.

Didn’t sit well with me.

I wanted to like this story, but it just seemed like Lopez was using Nathanial and would have gone on ignoring him had he not needed a story. Narration was a little flat.

Interesting on several levels (music, family, homelessness, and the field of psychaitry). Since it was published 14 years ago, one will be curious as to what has transpired since in those areas of life.