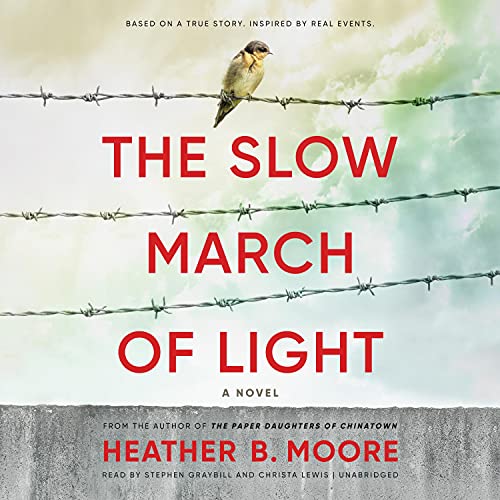 The Slow March of Light

By: Heather B. Moore
Narrated by: Stephen Graybill,Christa Lewis
Try for $0.00

In the summer of 1961, a wall of barbed wire goes up quickly in the dead of night, officially dividing Berlin. Luisa Voigt lives in West Berlin, but her grandmother lives across the border and is now trapped inside the newly isolated communist country of East Germany. Desperate to rescue her grandmother and aware of the many others whose families have been divided, Luisa joins a secret spy network, risking her life to help bring others through a makeshift underground tunnel to West Germany. Their work is dangerous, and not everyone will successfully escape or live to see freedom.

Bob Inama was an outstanding university student with plans to attend law school when he is drafted into the US Army. Stationed in West Germany, he is glad to be fluent in German, especially after meeting Luisa Voigt at a church social. As they spend time together, they form a close connection. But when Bob receives classified orders to leave for undercover work immediately, he does not get the chance to say good-bye.

With a fake identity, Bob’s special assignment is to be a spy embedded in East Germany. His undercover job will give him access to government sites to map out strategic military targets. But Soviet and East German spies, the secret police, and Stasi informants are everywhere, and eventually Bob is caught and sent to a brutal East German prison. Interrogated and tortured daily, Bob clings to any hope he can find - from the sunlight that marches across the wall of his prison, to the one guard who secretly treats him with kindness, to the thought of one day seeing Luisa again.

Author Heather B. Moore masterfully alternates the stories of Bob and Luisa, capturing the human drama unique to Cold War Germany as well as the courage and the resilience of the human spirit.

What listeners say about The Slow March of Light

I encountered a YouTube interview with Bob Inama and just had to read this book. It was well worth it. I loved the story. It was a great review of a portion of the cold war history. Bob was amazing! What an honest, hopeful, hero of a man.

OMG what a great Book!

When I downloaded this free book from the Plus Catalog I didn’t expect it to be much different than other good Post WW2 Stories, BUT OMG, this was a GREAT BOOK! The story and characters drew me in and I couldn’t stop listening. This biography is a whole different look at the Cold War told from a man who experienced it first hand. A story of true perseverance, strength, and attitude of gratitude. Don’t miss this book, it’s an all around 5 star.

Found myself on multiple occasions sitting in my car long after the chapter had finished and the book put on pause, just contemplating The impossible choices these deep and beautiful characters were faced with.

An introspective book, the main characters will be a personal inspiration to get me through times of difficulty for years.

I enjoyed the book

Well done and interesting. An easy listen with some tense moments. I would recommend this to friends.

Thank you for writing this powerful book. I had a very hard time of putting it down. The way that you described somethings I could almost picture the scene in front of me. Such an amazing book.

This is a must read for human rights during this time in history. It must be attached to all the political histories that do not transcript the human suffering.

This book touched my soul!

It is a deeply emotional story of an American hero and humanitarian. The author captured these true life events beautifully and I will not forget the example of true brotherly love

Great story, well narrated.
Descriptions of surroundings were wonderful. I would like to read more from this author.

This is a MUST read. Fact and fiction weave together beautifully to create this book. It was historical without feeling like a text book. Well done to the author. The narrators brought Bob and Louisa to life. God bless Bob Inama. Thank you for telling his story.

Listening to this book helped me feel increased gratitude for those who have gone through pain and suffering to protect the freedoms I enjoy. Thank you Bob Inama for your service. Thank you to the many others whose stories are untold.