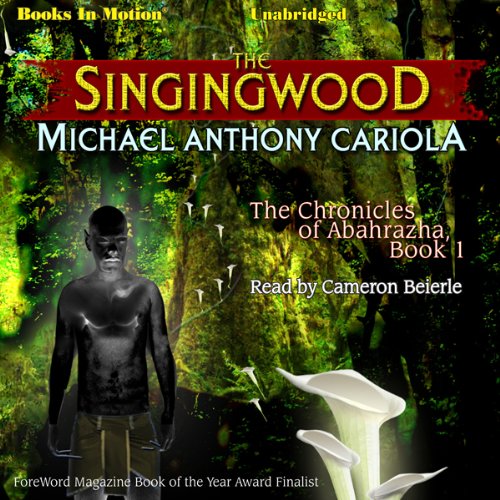 By: Michael Anthony Cariola
Narrated by: Cameron Beierle
Try for $0.00

Greed and avarice often have terrible consequences. When human traders violate the sacred forest belonging to the Tu-Grik-Ng and the alien foliage is brought back to Earth, the results are devastating to both worlds. Introducing these plants unchecked into Earth’s fragile environment proves to be ecologically disastrous and on Abahrazha the Tu-Grik-Ng lament the loss of their most sacred forest, the Singingwood. Years later, Tobias meets his fate when his crippled ship goes down on the remote planet, Abahrazha. Searching the remains of the wreckage, Bedukh, the gentle elder of Razha-Giim, locates the dying Tobias and nurtures him back to health. Bedukh’s people have chosen isolation since their first disastrous encounter with humanity and Tobias is prevented from returning to his home on Beta-Tau colony. Instead, he is initiated into Grikkian society and learns to live as one of them. Tobias soon discovers that long ago, the ancient ones of Abahrazha had destroyed their world through war and technology. Hence, for thousands of years the Tu-Grik-Ng, as survivors and inheritors of Abahrazha, have lived in peace by embracing the Green Sciences of tree and leaf. Tobias advances in his understanding of the Green Way but continues to struggle with his humanity. Given a glimpse of his destiny, Tobias embarks on a journey to the sentinel of the Ancients in hopes of solving its shadowed meaning. There he discovers the disturbing truth about the planet’s shrouded past. What he unleashes can either damn the Tu-Grik-Ng or save them from their stagnation.

What listeners say about The Singingwood