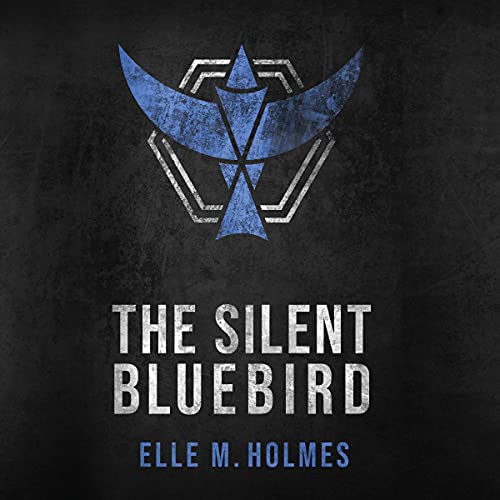 By: Elle M. Holmes
Narrated by: Linnea Hubbard
Try for $0.00

The stories we read have the power to change our lives.

Sadie Smith lives an ordinary life, unlike the extraordinary ones of the characters in the books where she finds an escape.

Until one story changes it all: The story of the impetuous Killian Quinn: an agent for the Zeta Defense Agency, determined to avenge his fallen partner. As she follows him further down the rabbit hole, worlds collide when she awakens with her hands tied to a chair in the face of armed men. Sadie finds herself dropped in the middle of a battle between secret agencies she didn’t even know existed, but maybe where she’s belonged all along.

What listeners say about The Silent Bluebird

I do enjoy a good thriller that includes a secret society or two. This story was OK but didn’t hit all the high marks I was hoping for. Admittedly, I was turned off early on and this made it hard for me to connect with the main characters. There’s a little insta-luv happening in like the first 10 minutes and I have found that this ploy is usually used to conveniently move the plot along when things slow down or get written into a corner. So was the case with this book and that made the plot a bit predictable and the characters a little cliched.

Still, I did finish it and it wasn’t all bad. Sadie Smith has a checkered past and is seeking that missing piece to her life, even when she thinks she’s put up walls to prevent any further heartbreaks. Her best friend Piper is super chipper and always trying to get Sadie to put down her book and go have fun. While there’s plenty about the love of a good book (yay!), there’s also too much about fashion and dating (yawn).

Meanwhile, our action hero Killian fulfills all the boxes for a 007 agent including the expected flirtatious and overprotective nature. I did like his interesting dynamic with his adoptive older brother Desmond. I really wanted things to turn out well for them both but circumstances aren’t that kind. There’s plenty of double crossing going on in this story.

The tale as a whole has more diversity than many (yay!) though the ladies are mostly romantic interests, with two main exceptions (one of who is dead before we even enter the story). All told, the book provided a little entertainment. 3.5/5 stars.

The Narration: Linnea Hubbard did an OK job. She had a good voice for Sadie, capturing her various emotions throughout the story. Hubbard’s male character voices could use more masculinity. I liked her various accents and when there were a few non-English lines, they were delivered smoothly and her Spanish accent was good (I don’t know enough to say one way or the other about the Hawaiian language). Sometimes where 2 or more characters were talking, the voices would get muddled so that I couldn’t tell who was saying what. Because of the way the book is written, this didn’t happen often. The pacing was good and there were no tech issues with the recording. 3.5/5 stars.

I received this audiobook as part of my participation in a blog tour with Audiobookworm Promotions. The tour is being sponsored by Elle M. Holmes. The gifting of this audiobook did not affect my opinion of it.

When a museum employee falls for a secret agent and follows him into his world, nothing will ever be the same again.

The concept and world-building for The Silent Bluebird are fascinating, and I look forward to reading more from the brilliant mind who created them! I also must give my compliments to the cover artist, as this cover art is the reason I finally agreed to review the book. I've seen this book on offer for review in several places over the last few months (maybe even a year?) and when I saw it offered for review in audiobook format, I couldn't pass it up anymore.

The plot isn't at all what I was expecting, but I liked it nonetheless. If you love espionage action adventures, this book has a lot to offer you. The characters, on the other hand, didn't win me over. Sophie is flat and average. The rest are hard to keep track of and tend to blend together at points. This is a debut novel, so I do expect issues like this will improve in future books, but for these reasons, I can't rate this as highly as I think the concept deserves.

In terms of narrative performance, this book was easy to listen to and plays well at different playback speeds. The performance is fine, neither spectacular nor poor. I wouldn't go out of my way to find books read by this narrator, she didn't drastically improve the experience, but she certainly wouldn't scare me off books either. Although I found some characters hard to distinguish from one another I think that's a writing issue, not a performance issue.

I was granted complimentary audiobook access to The Silent Bluebird as part of my participation in a book tour for this title with Audiobookworm Promotions. Thank you to all involved in affording me this opportunity! My thoughts are my own and my review is honest.

I really enjoyed this story, it was really entertaining and kept my A.d.d riddled attention span focused. I especially like the narrator. It was an easy listen.

I loved this audiobook! The narrator was insanely talented- her ability to change voice with characters was seriously impressive.
I also loved the storyline! I thought it was a fresh idea and I felt connected, especially to the main character! I’m looking forward to the next chapter of Sadie’s story!