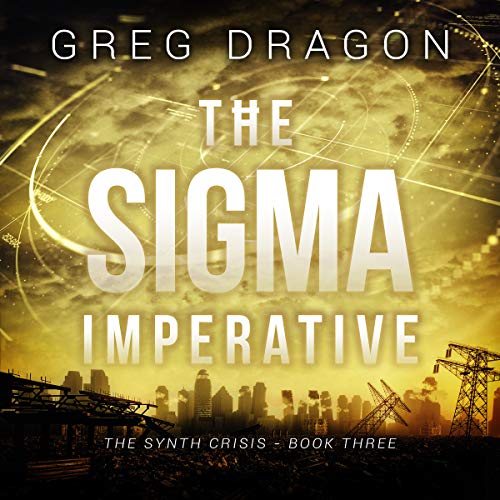 By: Greg Dragon
Narrated by: Tucker McDougall
Try for $0.00

Two years after stopping a wicked serial killer, former detective Dhata Mays is called in to investigate a kidnapping. After all, he’s the new “fixer” in town. But when Dhata discovers that there’s more at stake than a missing woman, he knows he’s up against an evil entity that might destroy everything.

With help from his partners, Dhata uncovers a plot that not only involves genocide, but a brand new model of android. It's the final hour and time is running out, but can Dhata Mays pull a hat trick, and bring an end to the synth crisis?

What listeners say about The Sigma Imperative

As great as this story is, I must start this review by acknowledging the narrator. McDougall IS Dhata Mays. Very little can be said about this story unless and until you glean the strength of character and person Dhata is. That completely comes across in the narration. Both character and narrator are amazing.

This third book in the series continues Dhata's efforts to save the synths. A lot of the story aligns with the current racial injustices so you felt for the plight of the synths, even if they weren't considered human. There is a new menace in town and the showdown was intense.

I loved everything about this listen!!

I have really enjoyed the Synth Crisis Series. The author has carefully considered what can happen when sentient machines become mixed in with our society. There are many things they can do that humans cannot, and they basically become a separate race, and suffer racism and class warfare because of it. I find it interesting that there does not seem to be much in the way of traditional racism , with all of the different types of humans seeming to live in harmony.

This book expands on all of the major characters, and I like the direction that they all seem to be headed. The main character, Dhata, is a bit of a puzzle. He seems to have a good heart, but can go into bad-ass mode in a heartbeat. I would love to learn more of his back story...what training makes him such a great fighter. I would also love to see what happens if he really just let go and attacked his enemies.

The narration is great as always, although the voice does not always quite fit my imagination of what Dhata should sound like. He still has great voices for what is basically an international collection of action heroes,

I was given a free copy of this audiobook at my request in exchange for a fair review, which I have voluntarily left here.

Contiinuing Dhata Mays' often unpopular championing of the synth community as abuse and body snatching increases and the main synth location becomes all but walked off from the rest of Tampa. As a skip tracer he can often go where many others cannot, but even his personal close friendships and the lives of both Chats and his girlfriend are seriously at risk this time.

An excellent narration by Tucker McDougall further adds to the enjoyment of this slick, fast action book and the character development of the main characters. Author Greg Dragon writes with superb creativity. Great story and one which can be read alone although better if the two previous Synth Criisis stories come first: a lot of background knowledge is stored there.

This book pits Dhata against a group who are kidnapping synths. He accepts a job to track down a girl who has been kidnapped as a favor to his contact in the Tampa Police Department. What he finds is that the kidnapping is part of a much larger operation involving a powerful gang and also even more powerful forces.

He must determine who is behind the plot to destroy the synths while he stays ahead of forces who are trying to destroy him and his girl friend.

This book keeps you on the edge of your seat and never lets you guess what the next move is going to be. The narration is outstanding with a wide range of voices for characters that shows emotion well.