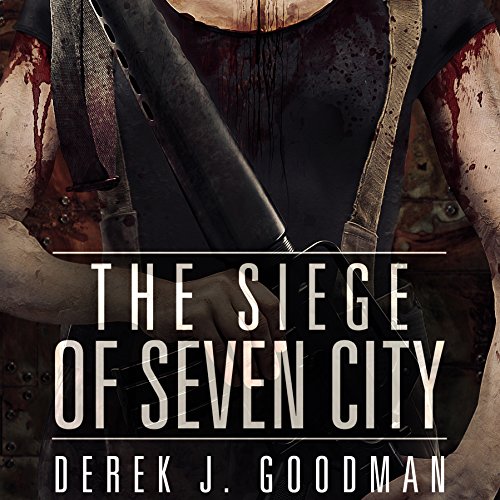 The Siege of Seven City

The Siege of Seven City

By: Derek J. Goodman
Narrated by: Coleen Marlo
Free with a 30-day trial

Seven City is reeling. Following the disastrous events of The Contamination of Sandra Wolfe, the inhabitants of the town, a community of former zombies called Z7s who are hiding from a world that hates them, are at a loss. The outside world now knows they exist and that they have powers far beyond those of normal zombies. A mysterious government official is preparing a full out assault on them, and Seven City does not have the supplies or the will to survive. But there is one ray of hope. Sandra Wolfe, a young Z7 who accidentally set the entire country against them, has abilities no one else yet completely understands. As armed forces prepare to come for them all, Sandra may just be Seven City’s last best hope. If, that is, they can survive that long.

What listeners say about The Siege of Seven City

Not as strong as the first two

This is definitely the weakest book in the series. The twists are not as good. The 'science' is glossed over and does not make any "sense." And yet, I really enjoyed the first two and this one completes the story so I am not sorry I downloaded it. Overall, I'd give the series as a whole four stars (if you are into zombie stories) and this particular installment three.

worst book I have listened to on audible

Would you try another book from Derek J. Goodman and/or Coleen Marlo?

No, not after that mess

What was most disappointing about Derek J. Goodman’s story?

The main character was killed in the second book of the series and the second character became a useless mess of vulgarity. Sorry its not a spoiler i am trying to save you from this garbage. So we are left with no one at all as the author desperately tries to make a new main main character of a moronic whining teenager/zombie. Actually worst it is a 19 year old zombie that acts like a 13 year old zombie. What we are left with is a stupid plot and endless teenager whining of life just isn't fair and no one runs my life..whaa whaa whaaaaa...

This is a clear concept of why the hero never dies in the middle of a series. Author failed at trying to break that rule. Failed miserably. If you are wanting to write a book, please never kill you main character and replace it with an adult that never matured past 13 and constantly whines that everyone is running her life even though she never listens anyway.

this is an excellent series, quite unique in the zombie genre! well worthwhile! truly fearless writing.