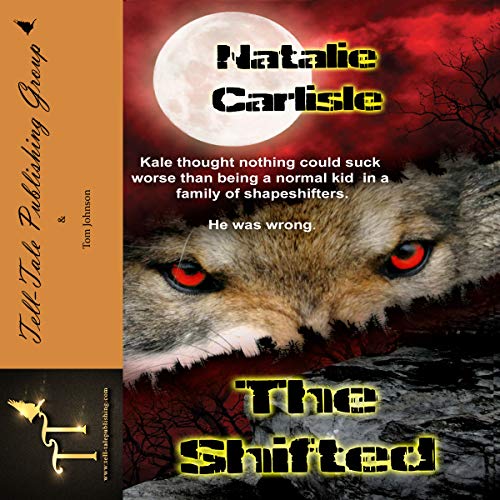 Kale Rollins’ life has become a living nightmare. As if it wasn’t awkward enough being an adopted normal kid in a family of purebred shape-shifters, he was now being transferred to a new school made solely for their kind. And it gets worse. He must attend this school under the pretense that he, too, is a shape-shifter in order to “babysit” his 14-year-old brother, who has suddenly shifted a year earlier than expected.

However, with the newfound knowledge that shape-shifting families are mysteriously disappearing, Kale wonders if attending Emerson Fox Academy is actually as safe as it seems. Before he even reaches the school, he finds himself in the middle of a feud that could become life-threatening to himself and his brother.

Unexpectedly friendships are formed as he chooses a side; so are enemies.

There is one girl though who makes him want to stay through it all. Except the closer he gets to Lavallette Waters, the harder it is to keep up his facade. As secrets start to unravel around him, Kale wonders what will happen next....

Will “babysitting” his brother be the death of him? Can he really trust Lavallette? And how much more time do they have before someone they care about disappears?

Be sure to get Full Moon on the Rise, the second installment of the Emerson Fox Academy series from Tell-Tale Publishing Group. Available now!

The book is not what I expected but I liked it. It is different to other shifter books that I have read. I am looking forward to the next book, the author has me intrigued.
The narrator, I found, did not suit this audiobook. He sounded a lot older then the characters and I found he spoke slow, so I had to speed the audio up a bit.
There is some violence and profanity but no sexual content.
Can't wait for the next book.

Fish out of water

I really enjoy fish out of water novels, and so when you put a kid whos grown up with out too many other shape shifters and put him in a school full of them, the potential for weird interactions is just awesome.

Interesting take on a tail as old as time...

The story was pretty original, and held my interest to the end to find out what happened. I would definitely read the next book in the series, but I would not listen to it.

The narrator sounded so much like Jim Gaffigan, so much like an older man, that I could not associate him with a YA novel narrator. The younger kid voices were hard to listen to, as were some of the female voices. He does have a compelling voice when speaking normally that I would enjoy under other circumstances.

The only part of the story that knocked me out of the new world was the 'imprinting' that was too much like Twilight. I know that it's a zoological term but when it's applied to werewolves it just made me laugh.

I think this was a great book. I loved the characters and the school. It was a very tame story about shifters and werewolves. I was entertained until the end. I felt like this was a well written story. This story was full of teenage characters and their bonds of friendship and sibling rivalry. I very much enjoyed it. The audible narration was just okay. It didn't distract from the story at all, but it didn't add anything either. I would recommend this book to anyone over the age of 12. I'm well into my 30's and I liked it. It was great.

I received a promotional copy from the narrator. I have voluntarily left this review.
This was such a good story. A big brother willing to do anything to protecting his brother. Kale is such a good guy, never truly fitting in only to find he is different, however being different can be a good thing. really really like a lot.

Shift to a new narrator

So main guy is named kale, and he is adopted into a shifter family. They were told he was a shifter when they adopted him but hes almost 16 and hasn't shifted like most do at 15. Shifter families are going missing, so a school for their kind was created. Scout is only 14 and has shifted early, which is rare, so he has to go to the school, which he hates, and his brother kale is asked by their mom to go with even though he hasn't shifted yet and may never apparently.

SO the story unfolds of kale trying to keep his non shifting a secret, good luck, and him trying to keep his little brother in check and safe. Not gonna ruin it for ya, the story line was great, I was very happy with it. The ending did seem a bit rushed and there is openings for a second book if you pay attention closely enough. I do hope there is another book...

HOWEVER due to the narrators odd choice of voices for all the girls and scout I just could not submerse myself into the story. I was able to finish it because I liked the story but it was a dull throb in my teeth to get through his husky female voices and whiny fake young guy voices. Other then that the narration was flat at some points. I was able a few times to get into the story but when majority of the time I was thrown out violently by a new characters voice or explanation in a flat tone. Im sure the narrator is good at what he does but this story was not doing him any good.

I was voluntarily provided this free review copy audio book by the author, narrator, or publisher, and it's my honest opinion because I read reviews as well and wanna know if a book is worth my time...

The publisher’s summary sums the book up quite nicely. Kale finds a new strength of character (he didn’t know he had) as he tries to navigate their situation. Before they even get to school, his hot-headed brother Scout gets them into a conflict, and Kale overhears a conversation that seems quite suspicious considering the Shifter disappearances. Once at school, he’s realizing how difficult it will be to keep his secrets. He’s not sure who to trust.

This is the first book I’ve read/listened to by this author and I would like to hear more in this series. Although there are obvious leads into the next book, this one does tie up some loose ends- a bit too conveniently however. The end wraps up quite quickly. There’s a bit of a “ta-da” reveal that feels rushed. Still, I’m curious where this story is going.

This is the first book I’ve listened to by this narrator ( Tom Johnson ). His reading of the narrative parts was ok. His cadence is such that it was comfortable to listen to, but due to the emphasis he places on the words, I never forgot I was being read to. His intake of breathe while narrating was very audible. Many of the voices were awkward. Scouts voice was unrealistically high pitched, and whiny even though he was supposed to have a higher voice as a 14yr old. All female voices were similar. Their voices were breathy, and whispery or like a person that has beginnings of laryngitis.

I really thought this was a great original shape shifter fantasy. No spoilers. I absolutely loved the story line, felt it was very well written, and was not at all predictable. I really had a hard time putting it down. My only complaint is I felt the narration fell short of the story. I could tell he was trying, but at times he sounded a bit drone like, and he tried using voices but would then forget to use them. There was some mild language in the story but that was it, so overall I'd say it's probably on a middle school age and up level.

The storyline was enjoyable.
The narrator would have been better if he didn’t try some of the voices. But still enjoyable.
I received this book for my honest review

absolutley loved this book and the way it was written. the narrator did a decent job but there were time I couldn't tell the difference in character and many of the females sounded off. I have listened to many books with male narrators that did female characters well. a few times the characters were supposed to be whispering but he voices them as if they talked normal or too loud. I had not anticipated the twist in the story near the end and I love when writers do that well, to where your not even guessing what will happen next.

I have received this audio book free in exchange for an honest review.

An interesting tale of shifters

The story is an interesting take on 'shifters' different to what I've read before. The characters are generally good and the plot keeps things going nicely. There's plenty of twists to keep things fresh and the ending leaves things open for more.

Overall a good story, not 100% original but still a good enough read to keep the chapters flowing by).

The narration is good and he attempts voices, some are better than other but the reading is clear and quality is good.