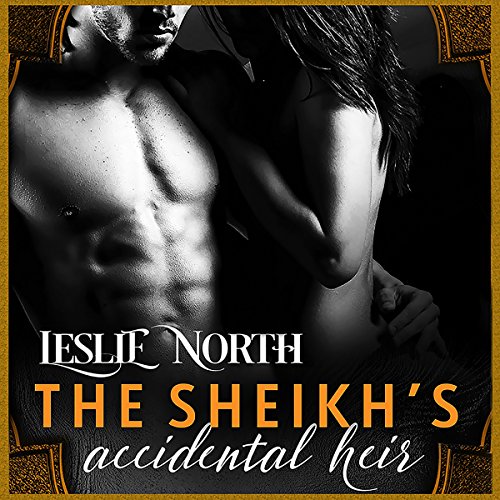 By: Leslie North
Narrated by: Nicholas Thurkettle
Try for $0.00

Sheikh Ahmed Al-Qasimi is used to playing by his own rules, but when his father decides that his lifestyle of excess is becoming a threat to his future, he has to work fast to clean up his image, or face the consequences. Ahmed is resigned to an arranged marriage to a woman with whom he feels no romantic spark, until another ghost from his past comes back to haunt him: his American ex-lover.

Melanie is working to prove her catering business is a world class operation, so when she is offered the opportunity to provide the food at Ahmed's wedding, she can't say no - even though they once shared a night of passion. When a stranger offers her $100,000 to stall the wedding, it's hard to refuse, especially when the connection between them is reigniting with a vengeance.

Letting go of the past isn't so easy though, when Melanie reveals a secret of her own.

Now, Ahmed will have to choose between being with the woman he's falling for, and saving his fiancée from a loveless marriage to another man. With his entire future at stake, can Ahmed find happiness for himself and the women in his life?

What listeners say about The Sheikh's Accidental Heir


The Sheikh's Accidental Heir is #02 of 03 in the Sharjah Sheikhs Series by Leslie North. All 3 are currently published with 02 being in audio. #3 should be out in audio soon.

Nicholas Thurkettle narrates the series, to include #3.

HEA with no cliffhanger!

These 3 are connected by brothers, and are more enjoyable in order, but could be taken as standalones. There would be slight spoilers for the earlier ones if you start at #2 or #3.

Warning: SEX!
Yes! Both in thoughts and actions, so those opposed should avoid.

Trigger Warnings
None that I see.

If you are not the heir or the spare, then what are you?

Sheikh Ahmed Al-Qasimi is the baby of the family. He feels overlooked and under-used in his family. He is never given anything of importance to oversee, only frivolous things that his father or brothers don't want to waste their time on. It's getting old and boring and he longs for something more. When Ahmed spots a stunning green eyed brunette member of the catering staff, he knows he definitely wants more of her!


So the hunt begins!


With Melanie, her career comes first, past failures be damned! Establishing her catering business is her goal as well as where she puts all of her time and money. She meets the sexy Ahmed one evening during an event she is catering while both of them are attempting to find a private moment to breathe. Melanie is as taken with Ahmed as he is with her, but there is not room for a man in her life, or even a day off. Food seems to be Melanie week point, as she is eventually coaxed into a midnight meal at a place that is authentically local. His treat, of course!


During their late night rendezvous, Ahmed confesses he has not had the pleasure of truly seeing New York and Melanie agrees to a weekend of helping to rectify the injustice. A no strings attached Cinderella story that ends at midnight on the second day. And it does, but their time together leaves lasting impressions on the pair in more ways than one. Melanie doesn't want to derail her plans with the complication of a relationship and tries to avoid Ahmed, but he has decided he wants his little American and is going to do whatever it takes to get her back into his life.


Of course it's not going to be that easy!

Ahmed's father is up to his old tricks with unwelcomed surprises. There is a mystery man offering Melanie a large sum of money out of nowhere. There are more secret weddings, babies, and of course HOT hanky panky!

You will be pleasantly surprised at the amount of story that is packed into this 3 hour audiobook. Overall this is a well plotted sexy little story!


This is my second read/listen by Leslie North, and I am trying to sit on my hands in anticipation for book #3, which is not in audio yet! The ebook is currently available if you can't wait. Her writing is excellent! The covers are still HOT!

This is my second listen by Nicholas Thurkettle, and I'm still in love! He humanizes all of the characters, no matter the gender or age. He uses a slight accent for Khalid and his family that sounds like it could be the way the characters would really talk and not a gimmicky accent that is often done for people in that area of the world.
Nicholas has 13 Audible Titles

Nicholas did another amazing job when he narrated this. I loved the emotion and sass he projected into his narration. I've always loved books where bad boys turn good(ish) and uptight girls learn to let loose. Hearing about Ahmed and Melanie and all the obstical they have to go through to find their happily ever after is well worth listening to or even reading. Stories like this where accidents happen make the sweetest most wonderful endings. I loved all the wonderful twists that Leslie put into this story and I can't wait to hear more of her works.

Great plot with excellent narration! The characters both grew in their own ways, some more than others, in this sweet yet spicy, story. This is an enjoyable audiobook for sure. This is a voluntary review of a gifted copy.

I've read/listen to a few of Leslie North's books with the men from the middle east...Always a fun quick and hot read. The men quickly come to appreciate their American soulmate, and it's fun getting there.
Ahmed is in NYC with his two older brothers because his father feels he needs to become more responsible. As you find out he may play around but he really isn't a heartless player, but seeking his own place in the world and giving he finger to his father.
He meets Melanie and they have a quick two days affair that neither can forget...well the condom broke on the last time they made love and so is explained the title of the book.
The narrator is fantastic...gorgeous voice for Ahmed and he does a woman's voice well, not forcing it
Pick it up, fun entertaining, not full of unnecessary angst...HEA.

Would you listen to The Sheikh's Accidental Heir again? Why?

I most definitely would listen to this book again. I really liked the unexpected twists this story had

What was one of the most memorable moments of The Sheikh's Accidental Heir?

I loved the wedding -- I don't like giving away spoilers in my review, so I will keep the answer short.

I thought the narrator Nicholas Thurkettle was able to perform so many various characters with distinguishable voices.

I really enjoyed the whole book. Leslie North is a talented author that writes so many great stories with interesting characters and unexpected twists.

I was voluntarily provided with this review copy audiobook at no charge by the author, narrator and/or publisher. I will definitely look for more books by both the author and narrator.

Love socks not so durable

Thank you Leslie North for another great book that I can listen to while mommy duties never stops. Love the narrator Nicholas Thurkettle.
Delicious fling, love the romance, the twist, and the Sheik broke the love socks damn he must be that damn good! (Naughty wink) lol

Audio version.
Lovely, Leslie North has done it again. I can't wait for the next brother's story.
The narrator brings the story to life.
This Audio book was given to me for free at my request from the publisher, author or narrator and I provided this unbiased voluntary review.
Reasons I enjoyed this book:
Easy-to-read, Entertaining, Funny Great world building, Happily Ever After, Page-turner, Romantic, Steamy, Wonderful characters.

Very nice listen, perfect for a hellish commute. I was given this free review copy audiobook at my request and have voluntarily left this review.

Quite A Progressive Sheikh


This story is about Melanie, an up-and-coming caterer, crossing paths with a sheikh who is about to be forced into an arranged marriage. While in 'real life' a coupling of this sort would never happen, this is why we read/listen… To be swept away in a fantasy.

Melanie is an independent woman, entrepreneur and depends on herself alone. The Sheikh is a grown man who has never had to do anything for himself because of status and wealth. However, marrying a woman his family has picked out for him is not appealing. He asks Melanie to create diversions that will postpone his nuptials.

The 2 of them have a one night tryst complicating things even more. Should she continue with the plan for a delay in order to collect the $100,000? Or will other factors lead her in another direction?

This is a satisfying romance that stands alone – no cliffhangers. Above average 3.5 stars

Nicholas Thurkettle has a wonderful deep voice. A 4 star performance

*I received this book in exchange for my unbiased opinion. Books that have a male lead, with this background/belief system, tripping over an independent, successful, American woman are hard to take at face value. I like listening to a book with this type of plot line on occasion but I prefer romances that are a bit more 'realistic.' That being said, I have another romance by Leslie North that I cannot wait to listen to. It is called Her Relentless Russian – part of the Karev Brothers series. I have the feeling that this will be even more to my liking. Stay tuned :-)

I invite you to follow me on Audible for more reviews. If my review was helpful to you in deciding whether or not to purchase this book, would you take a moment and select 'yes' below? Thank you.