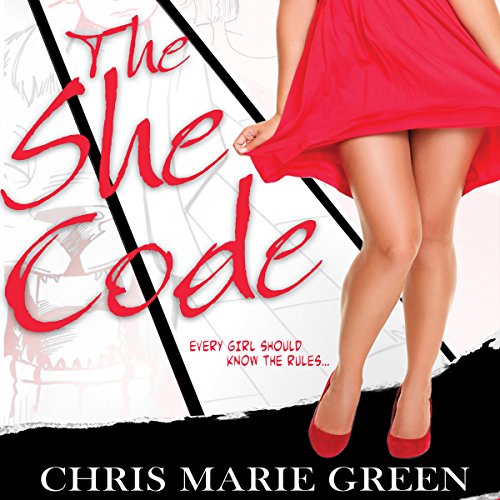 By: Chris Marie Green
Narrated by: Elizabeth Evans
Try for $0.00

>i>"I suspected my friendship with Sheila was doomed on the night she blew my boyfriend...."

Meet Mandy Halsey, fresh out of college and determined to go from being a receptionist at the assembly line comic book house where she works to being a real-live penciler by the end of the year. That's the plan, anyway.

But life isn't cooperating. First, her job feels like a dead end. Second, her personal life isn't exactly on fire, either, especially since her best friend seems to be moving in on every guy who catches Mandy's eye. Is it just Mandy's imagination or has Sheila totally changed since graduation, becoming someone who’s almost a stranger?

No way, because the BFFs grew up with The She Code. See, girls have rules with one another, so surely the friend Mandy grew up with wouldn't ever break the Code - and break Mandy's heart at the same time....

The She Code, a new adult/single girl/geek lit hybrid, is all about the bright side of angst - because there definitely is one!

What listeners say about The She Code

Decent story, but it never quite lived up to its potential. Lots of geeky moments to squee over, that was a definite plus. I listened to the audio version, which was well done, but that meant I didn't get to see the graphic panels. :( That might have bumped it up a half a star or so...possibly. At the very least, it would have been interesting to see the visuals.

My biggest issue was with the heroine. She could be fun and geeky/quirky at times--I loved the fact that she wanted to draw and write graphic novels--but then she'd go all squirrelly on us. She was completely blind to things that should have been obvious, were actually obvious to everyone else. There were times when I thought she'd gotten a clue, but then she turned around and proved me wrong. She also let certain events from the past rule her present, and went a bit overboard. (Especially when we found out the details about those life-altering events and saw that for the most part they were one-offs. Granted--one caused her parents' divorce and her mother's depression, but when we find out that it was the one and only time it had happened? Seemed like total overreaction on mom's part...which apparently was status quo for mom, at least back then. One rejection of her work and she never writes again? Dramatic much? Though we could clearly see where Mandy got her "one chance and you're out" attitude from.)

Everything ends on an optimistic note, which was nice, but I would in no way classify this as a romance. Mandy spends more time moaning about people moving in on the guys she's crushing on/ attracted to/ used to date (until he kissed someone else) than going on dates or hanging out with guys in date-like settings. I was a bit bummed not to have seen more page time for the guy she's probably going to end up with--he was a fun character. I do have to say, though, that his "declaration" is absolutely adorable. It was definitely a highlight, and the part I will remember most.

Sooo...I didn't love it, but I didn't dislike it either. It had some memorable bits and many cute and funny moments, but never quite lived up to its promise.

I received a complimentary copy in exchange for an honest review.

Chick Lit? Now I get it!

This is an easy listening book, but definitely had me coming back for more. I never understood 'chick lit,' but now know the story arc is low and smooth, subtle and hard to quit like snacking on a big bowl of potato chips: nothing spectacular, but habit forming and satisfying, just the same. The presentation was perfect, too. Never a drop in voice intensity or volume as in other books I've listened to.

If I hadn't like it, I wouldn't have finished it or reviewed it. Now I'm looking for more by the same author and narrator.

Where does The She Code rank among all the audiobooks you’ve listened to so far?

The She Code was an enjoyable book to listen to. I gave it four stars because it was a light leisure book with an ending that made me want to hear more. I think if this were to be a series, I would probably listen to the whole lot.

What was one of the most memorable moments of The She Code?

One of the issues I have with this story is, though the author stored in some drama, it seemed anti-climactic. When something amazing was finally going to happen, the book ended. I would like to listen to more but I'd rather not have what seems to be the climax of the book at the end. Having said that, the most memorable moments was toward the middle of the story. Mandy was having a hard time with her roommate(s) and spent a night on the couch in the neighbors apartment. I was intrigued by Marco's reactions to Mandy.

Have you listened to any of Elizabeth Evans’s other performances before? How does this one compare?

The She Code was the first I've listened to Elizabeth Evans and am glad that I found another author to add to my list of favorites. I'll be looking for more of her work.

In a perfect world where I could laze the day away just listening to the book, I would. I would even settle for being able to listen to it while doing house chores or while at work. That simply is not the case so I was unable to listen to this in one sitting. If the circumstances were there, I probably would be able to do this in one day.