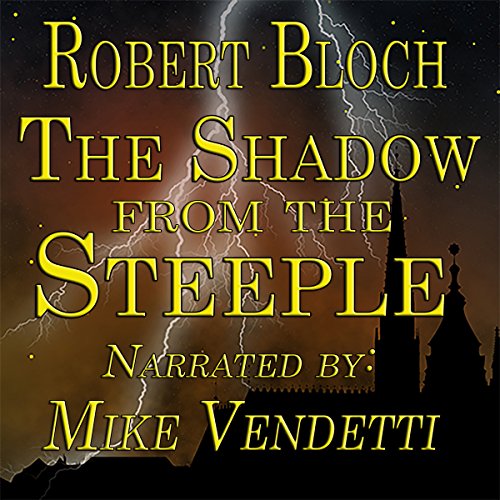 The Shadow from the Steeple

The Shadow from the Steeple

Award-winning narrator Mike Vendetti takes us to Providence, Rhode Island, where the cult of the Church of Starry Wisdom used an ancient artifact known as the Shining Trapezohedron to summon a terrible being from the depths of time and space.

After the death of Robert Blake, who came to grief after discovering the Shining Trapezohedron and deciphering texts about it from ancient evil cults, the artifact was removed from the black windowless temple where it was found by a Dr. Dexter and thrown into the deepest channel of Narragansett Bay. It was expected to remain there, under the eternal light of the stars, forever; yet Robert Bloch's sequel, The Shadow from the Steeple, proved that Nyarlathotep had cheated Dexter, forcing him to peer into the stone and actually throw the stone into the bay, where the eternal darkness of the depths gave the Haunter the power to remain perpetually free; it used this power to merge with Dr. Dexter and make him one of the world's leading nuclear scientists in charge of atomic investigation for warfare.

While i enjoyed the story the narrators frequent mispronouncings and mistakes while being rather monotone create some diffuculty immersing yourself in it.