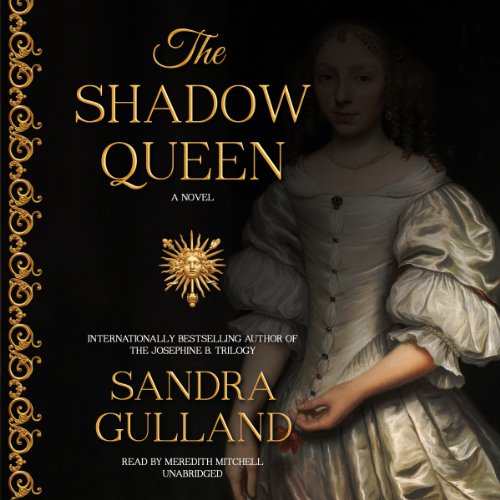 By: Sandra Gulland
Narrated by: Meredith Mitchell
Try for $0.00

From the author of the beloved Josephine B. series comes a spellbinding historical novel about a young woman who rises to become the confidante to the most powerful, provocative, and dangerous woman in the 17th-century French Court: the mistress of the charismatic Sun King.

Paris, 1660: As the daughter of itinerant actors who once lit up the Parisian stages, Claudette always thought her future lay in the theater. But a series of chance encounters pulls her into the alluring orbit of the most beautiful woman in all of France: Athénaïs de Montespan, the mistress to Louis XIV and reigning "Shadow Queen". Impetuous by nature, Athénaïs wields a disconcerting amount of power - a fact that has ruffled many of the Sun King's key advisors.

Needing someone to act as her eyes and ears, Athénaïs hires Claudette as a personal attendant. The young stagehand leaves the world of theater only to find that court is very much like a stage, with outward shows of loyalty masking more devious intentions. This parallel is not lost on Athénaïs, who fears political enemies are plotting her ruin while young courtesans angle to take the coveted spot in the king's bed. Indeed, Claudette's supposedly respectable new position is marked by spying, rumormongering, illicit trysts, and titanic power struggles.

As Athénaïs begins to lose her grip on the Sun King, her plots and fascination with the magical arts take a dark turn that makes Claudette question her allegiance to this mercurial figure - and puts the young maid's life in jeopardy. Set against the gilded opulence of a newly constructed Versailles and the blood-stained fields of the Franco-Dutch War, The Shadow Queen is a seductive, gripping novel about lust, power, loyalty, and the increasingly uneasy relationship between two strong-willed women whose actions could shape the future of France.

What listeners say about The Shadow Queen

What would have made The Shadow Queen better?

Breathe some life into the characters. None of the characters were described in a way where they would be compelling. The most lifeless book I've read in quite some time.

What was most disappointing about Sandra Gulland’s story?

Ms Gulland's triology about Josephine Bonaparte were riveting. Her description of the French Revolution was incredible. This book was an extreme disppointment after having read such wonderful books from her.

If you could sum up The Shadow Queen in three words, what would they be?

I liked the character of Xavier, he was interesting and was a stable, honest character in the world of the scheming court.

Which character – as performed by Meredith Mitchell – was your favorite?

I liked Claudette, as she gave details about the world and was easy to listen to.

No, it was very slow at the start and the ending seemed a little too "happily ever after" for a book about a real courtier in 17th c. France, although since not much is known of Claudette's later years, it worked. It was a good read, but nothing I was dying to get to the end of.

I love the style of story. I was taken back to the Court of the Sun King, with all its grandness.