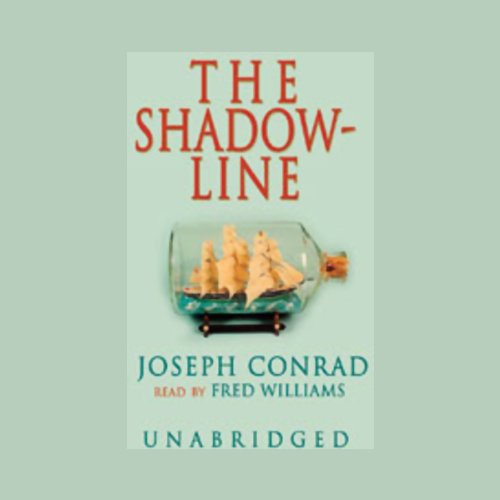 By: Joseph Conrad
Narrated by: Fred Williams
Try for $0.00

Written at the start of the Great War, when his son Borys was at the Western Front, The Shadow-Line is Conrad's supreme effort to open man's eyes to the meaning of war through the stimulus of art. In many ways an autobiographical narrative, this masterpiece of his final period relates the story of a young and inexperienced sea captain whose first command finds him with a ship becalmed in tropical seas and a crew smitten with fever. As he wrestles with his conscience and with the sense of isolation that his position imposes, the captain crosses the "shadow-line" between youth and adulthood.

It is the qualities, both individual and collective, needed to confront the ship's crisis that symbolize the qualities needed by humanity, not only to face evil and destruction but also to come to terms with life.

What listeners say about The Shadow-Line

A Reflexion on Maturity

"a man should stand up to his bad luck, to his mistakes, to his conscience and all that sort of thing Why--what else would you have to fight against?"
-- Joseph Conrad, The Shadow-Line

One of Conrad's later novels. This one was published in 1917. The story is pretty straight forward, the plot direct. It isn't an elaborate story, but one that explores that moment, that shadow-line between youth and adulthood. The basic story involves a young officer, suddenly thrust into command. During his first voyage he is tested and learns about strength, duty, obligation, etc. It is a story about maturity, wisdom, experience.

I'm not sure if my love of sea stories is directly tied to Conrad, or if my love of Conrad comes from my love of sea stories. The genre and the writer are both so closely mixed in my brain. What I do know is I love the morality of Conrad. I love his affection for men, for work, for duty, for the sea. I also love his modernist bent toward psychology and the untidy unknown. Mostly, I love the clean, tight precision of his prose (which often conflicts with his ambiguous narratives). This isn't top-shelf Conrad, but shouldn't be ignored by his devoted fans.

Great story delivered in monotone. the narrator read the story... It was no performance. Disappointing!

A simpler, lighter novel by Conrad

Like "Lord Jim," this is a story about a young man and his behavior when in a position of responsibility. Unlike "Lord Jim," the protagonist is a very straightforward young man without a neurotic or narcissistic bone in his healthy, young body. There's plenty of adventure and menace to keep you entertained, and a lot less "Naval-gazing" (sorry, couldn't resist the pun) than there was in "Lord Jim." I like "arty" classical literature, but I like a plain, good story even better! I also enjoyed the gentle pace of the telling. That works well for me as my imagination conjures up the image to match the author's words. I don't like to be rushed when the writing is this good.

I'm a fan of Joseph Conrad, but this isn't his best work. It's windy and over-written, and seems dated, unlike most of his work. It's not helped by the narrator, who sounds like an old fogey sitting in an armchair with a plaid rug over his legs, and who often seems to get the rhythm or emphasis wrong.

The story is of a young man on his first real command, and though it's told in retrospect at the end of his career the narration was out of sync with the story, which needed to be told more vigorously, and by a person you could imagine once was a man of action. I was disappointed - though clearly others thought different - and might have given it an extra star had it been read as it should have been.

A gripping yarn, read by a pro

Fred Williams has the most perfect, measured, sonorous voice for this salty tale of coming of age, captaincy and a desperate struggle against both natural foes and the malignant influence of supernatural rumour.

Very bad recording quality. You should have used a de-esser and a pop filter at least to make the sound better and clearer. In my opinion, such products, even if "included in the subscription", should not be on Audible.