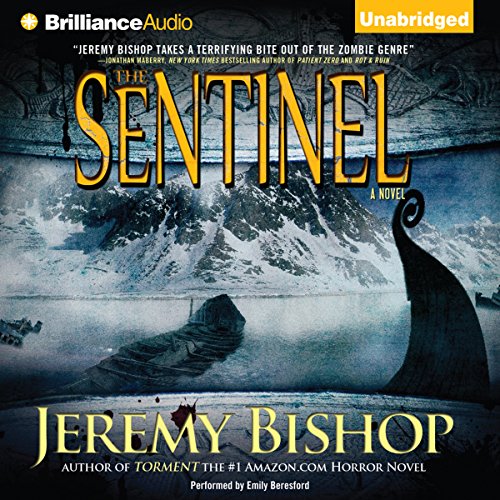 By: Jeremy Bishop
Narrated by: Emily Beresford
Try for $0.00

In the frigid waters off the Arctic Ocean, north of Greenland, the anti-whaling ship The Sentinel, and her crew face off against a harpoon ship in search of Humpback whales. When the two ships collide and a suspicious explosion sends both ships to the bottom, the crews take refuge on what they think is a peninsula attached to the mainland, but is actually an island, recently freed from a glacial ice bridge.

Seeking shelter, the two opposing crews scour the island for resources. Instead, they find Viking artifacts, the preserved remains of an ancient structure and a stone totem warning of horrible creatures buried in the island's caves. Facing violent, frigid storms, a hungry polar bear and the very real possibility that they are stranded without hope of rescue, Jane Harper leads the two crews, who must work together to defend themselves against an ancient evil upon which the modern stories of both zombies and vampires are based.

The original undead are awake and hungry. Beware the Draugar.

Jeremy Bishop, the #1 best-selling Amazon.com horror author is back, and his second novel, like his first, Torment, is full of fast-paced, run-for-your-life terror featuring a new take on the zombie (and vampire) genres. But this time, the story is tinged with sarcastic humor. As a result, The Sentinel is as funny as it is frightening. It is the Yin to Torment's Yang.

What listeners say about The Sentinel

I felt like this was two novels rather messily stitched together. It opens with an interesting thriller scenario at sea, with Jane Harper undercover on an anti-whaling ship. The cast of activist characters were craftily drawn and quite intriguing.

After a shipwreck, the survivors are faced with zombie vikings. From this point on, the plotting, the characterization and the writing in general takes a dramatic dive.

Some readers may find Jane Harper endearing. I can't say I every really warmed to her or found her credible. Between her inability to decide whether she wants to get laid, and her constant fat jokes, the only thing I really found admirable about her was her throwing arm.

It's a fast, light read and the mythology of the horror is quite compelling and fresh. I think I would have really enjoyed a setting that could have explored that more fully and meaningfully. As it is, it felt formulaic.

If you are interested in a really chilling piece of horror in the arctic circle, I would highly recommend Dark Matter, by Michelle Paver http://www.audible.com/pd?asin=B00480EF4U . Not as much of a light horror romp, but much meatier.

Zombie Vikings, polar bears,and other mammals? Yes please. Kick ass heroine? Yes please. Plot holes and stupid main characters? Well, yes. That too. Overall, this book was good fun. The story was different from the usual zombie fare. Lots of action, and no implausible HEA (people die). There are some instances where the plot doesn't jive. Some, "wait, but then how..." type moments. There are also a couple of moments where I rolled my eyes at the characters' thought processes. Sometimes they seemed slow to figure things out. I think the author's goal was to make the characters more human and not omniscient. But they are too stupid. They have epiphanies about things I figured out chapters ago. It's a little frustrating. I like my characters human. I like that they struggle. I just wish the puzzles they struggled with were more complex ones. It did not bother me much in this book. I still enjoyed it very much. But these problems get much worse in the second book. So, if this stuff gets on your nerves, you might not want to get invested. I listened to both books, though, and I am glad I did. They were fun stories.

not the greatest piece of literature ever but a well worthy romp. I enjoyed the vasic premise and it was told well both written and narrated. a little predictable and hurried at the end. Inwill certainly read this author again.

Our protagonist Jane Harper works for the World Society for the Protection of Animals (WSPA) as an investigative journalist covertly reporting on the illegal taking of whales in the Arctic Ocean. She secures a crew position on The Sentinel, a reconditioned anti-whaling ship that follows and harasses the illegal whaler Bliksem; similar to objectives by Greenpeace. The adversarial encounter gets out of hand, leaving both ships sinking. Jane and several crew members make shore to what they believe is a peninsula from the mainland in a liferaft. A few of the Bliksem crew also survive. Together, they discover they’ve landed on an island with no supplies or shelter. With the setting presented and the characters introduced, the story proceeds with a series of unusual discoveries, paranormal sightings, and terrifying encounters. Seeking shelter from a storm and the bitter cold, discovered caves appear to be a lifesaver. Unfortunately, the caves are connected to ancient Scandinavian folklore, sealed for a purpose. What is released is beyond the imagination!

Narrator could be better

The narrator for this has a voice that can be annoying at times for the main character. She does a decent job with the male voices. Also there were times when she would read a sentence with the emphasis on the wrong part of the sentence or without a required pause needed to make the sentence actually make sense. It's hard to explain but the closest I can come is to say that at times it seemed she was just reading the words and didn't read them as they should be read for the sentence to makes sense. Perhaps more prep work was needed before the taping.

Engaged from start to finish

Pretty much all I'm asking for, hoping for, is to be hooked successfully from start to finish. This is a variant zombie story and at first the locale might seem a bit far fetched. But the story engages you early on, before you have time to reject it altogether. That, to me, makes this story a winner.
I could go on about the story, but there is a fine line between summary and spoilery. The book description, Audible provides, gives you a good idea of what to expect. Jane Harper is a strong female character and lead - courageous, witty, and a sharp sensibility.
It's only 8 hours long, though it felt shorter. Beresford's narration is best when she speaks for 3 of the main female characters and maybe 2 of the men. But then her performance thins out beyond those 5 characters and it becomes a bit distracting.
I do recommend this audiobook. I won't forget this story and some of it's characters any time soon.

Cold at first,eventually warms up..

Narration was stiff and cold at first but gradually warmed up!Excellent story,ive listened to the first two books repeatedly and like many others im still waiting gor book three to wrap this mofo up

Not your luxury vacation island...

This story started out as a battle between whalers and whale lovers. The interaction between the characters of each group was quite entertaining. As the story evolved to the island, everything was kicked up several notches. The turn the story took had fast-paced action and amazing characters for our immense enjoyment! Each time I thought I knew where we were headed, the story proved me wrong. I loved this story and have already downloaded The Raven to start on immediately.

Okay in every way. Entertaining, but offers little excitement and is basically formulaic. You know what will happen before it does.

Jeremy Bishop does it again, brilliant as always! Can't wait for more books in this series, as well as his others!

Brilliant story, couldn't put it down, so to speak. The narrator's voice is mesmerising , the people were believable, and the storyline had me gripped from start to finish.