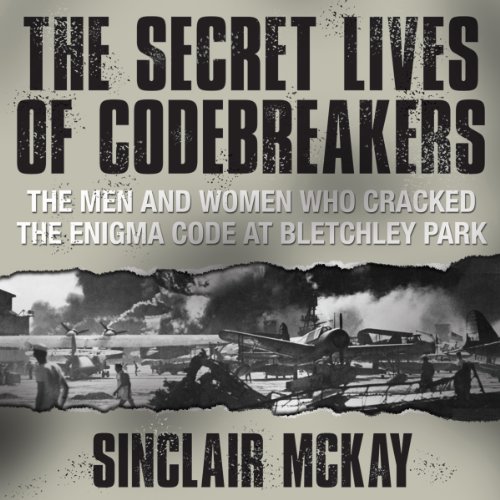 The Secret Lives of Codebreakers

By: Sinclair McKay
Narrated by: Walter Dixon
Try for $0.00

A remarkable look at the day-to-day life of the codebreakers whose clandestine efforts helped win World War II.

Bletchley Park looked like any other sprawling country estate. In reality, however, it was the top-secret headquarters of Britain’s Government Code and Cypher School - and the site where Germany’s legendary Enigma code was finally cracked. There, the nation’s most brilliant mathematical minds - including Alan Turing, whose discoveries at Bletchley would fuel the birth of modern computing - toiled alongside debutantes, factory workers, and students on projects of international importance. Until now, little has been revealed about ordinary life at this extraordinary facility.

Drawing on remarkable first-hand interviews, The Secret Lives of Codebreakers reveals the entertainments, pastimes, and furtive romances that helped ease the incredible pressures faced by these covert operatives as they worked to turn the tide of World War II.

What listeners say about The Secret Lives of Codebreakers

Dull treatment of an exciting subject

probably not. there are better books on the subject

Has The Secret Lives of Codebreakers turned you off from other books in this genre?

I hate to be too hard on this book, but I personally found it a very dull read on a subject I am fascinated by. It's not easy to write engaging non-fiction, but if ever there was fertile ground for it, it was the story of Bletchley Park in the 30s and 40s.There was nothing new for me in this recounting of the facts- though there were some interesting "telling" about some of the more interesting personalities and management styles, but it all read like a newspaper account- there was no "showing". I never felt any kind of connection to the people or the place. It was all just thoroughly, but dryly described.

One of the more approachable histories

I've read or listened to several histories of Bletchley Park. This one does a great job of letting you know what it was like for the people who were there. How the food was. What the conditions were at their billets. How so many people could work in such close proximity and rarely see one another. How the secret of Ultra could have been kept by so many, for so long.

And, yes, what sorts of contributions to the war they were making, whether they knew it at the time or not.

I enjoyed listening to this , wouldn't exactly describe it as riveting but I definitely learned a lot and the narration style definitely contributed toward my genuine enjoyment of this audiobook

I really enjoyed this back story about Bletchley Park and the people who worked there.

headers? we need no stinking headers!

a little dry at times. wonderful content. I need an extra right word for passing

What made the experience of listening to The Secret Lives of Codebreakers the most enjoyable?

What other book might you compare The Secret Lives of Codebreakers to and why?

The combination of linear storytelling, personal anecdotes, and historical context is reminiscent of The Boys in the Boat - although McKay's writing style is amateurish in comparison. That said, I enjoyed the way each author wove his research into the historical backdrop,

Unremarkable, yet pleasant (He flubbed a few pronunciations, too)

This book is well-researched and the organization is solid. However, McKay needs to enroll in a few undergraduate writing courses. His sentences are unwieldy to the point of distraction. I am relieved I listened to this book instead of reading it; the narrator's delivery was a welcome distraction.