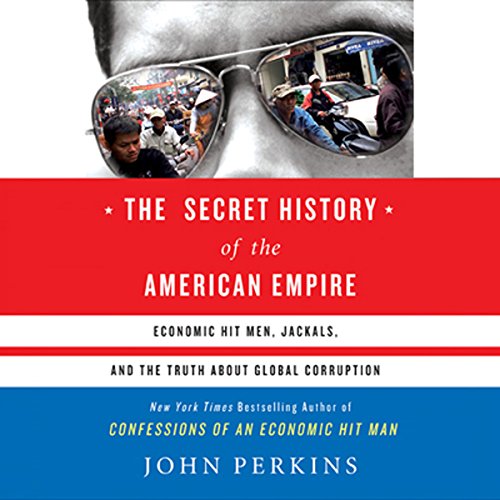 The Secret History of the American Empire

By: John Perkins
Narrated by: Jonathan Davis
Try for $0.00

In his stunning memoir, Confessions of an Economic Hit Man, John Perkins detailed his former role as an "hit man" operating within the international corporate skullduggery of a de facto American Empire. That riveting, behind-the-scenes exposé unfolded like a cinematic blockbuster told through the eyes of a man who once helped shape that empire.

Now, in The Secret History of the American Empire, Perkins zeroes in on hot spots around the world and, drawing on interviews with other hit men, jackals, reporters, and activists, examines the current geopolitical crisis. Instability is the norm; it's clear that the world we've created is dangerous and no longer sustainable. How did we get here? Who's responsible? What good have we done and at what cost? And what can we do to change things for the next generations? Addressing these questions and more, Perkins reveals the secret history behind the events that have created the American Empire.

From the U.S. military in Iraq to infrastructure development in Indonesia, from Peace Corps volunteers in Africa to jackals in Venezuela, Perkins exposes a conspiracy of corruption that has fueled instability and anti-Americanism around the globe. Alarming yet hopeful, this book provides a compassionate plan for reimagining our world.

"A sweeping, bold assault on the tyranny of corporate globalization, full of drama and adventure, with devastating stories of greed run wild. But Perkins is undaunted, and offers imaginative ideas for a different world." (Howard Zinn, author of A People's History of the United States)

“John Perkins' new book is both an eye-opening expose of global corruption and a fascinating story of adventure and intrigue. This devastating indictment of current economic policies also offers hope by showing the power of the growing movement toward a caring economics worldwide.” (Riane Eisler, author of The Chalice and the Blade and The Real Wealth of Nations)

“Having made a splash with Confessions of an Economic Hit Man, Perkins offers similarly entertaining but disturbing accounts of the American government wreaking havoc around the world in support of American business. In Perkins's view, American presidents willingly comply with their CEO masters, distributing foreign aid to corrupt Third World leaders who keep a share and return the rest to U.S. business for major projects, leaving their nations poor and massively in debt, and requiring more loans and slavish obedience to U.S. policy. If any leader objects, the CIA destabilizes his government, by assassination if necessary.” (Publishers Weekly)

What listeners say about The Secret History of the American Empire

The first part of the book is basically a rehash of "Confessions.." with a tad more detail. Nonetheless, its a good read and important documentation of our true history.

I found this book a fascinating sequel to John Perkins "Confessions of an Economic Hit Man." "Secret History" includes more detailed information about the whys and hows of the urgent need to challenge the drift of modern life. (I liked the reader, too. He did a great job,subtly and miraculously assuming several foreign accents-CORRECTLY!)

Rather than bestsellers on how to manipulate the modern US lifestyle to best achieve Hedon, narcissistic, material comfort and that relegate those who don't aspire to such as "losers," this book deals with the scary side of realness.

Perkins presents fascinating insights into the mentality of other EHM's (many who seem to have sought him out after his first book came out)whose consciences are throbbing. Though Perkins presents some titillating insights into lives of the rich and powerful -like the parts about geishas--it's clear that's never the underlying point. His analysis always comes down on the side of the historical underdog. He also points out how the exploited are not unaware of their plight, and often see the bigger picture faster and clearer than those who are living the privileged life on a daily basis. I like how he included historical anecdotes to connect present with past.

Perkins gives a few suggestions for action that I personally found useful, and have followed up on. I felt hopeless after reading "Confessions." After "Secret History" I realized that powerful men engaged in destructive decision-making will at very least sometimes listen to other men they think they respect, and who may be able to successfully present them with either new perceptions, or with more real assessments of their impact. I think Riane Eisler' new book about broadening the definition of the current concept of "economics" would compliment this book well.

I hope for more from John Perkins! And I hope more like him will write the hidden histories that account for the mess we are in.

This books seems like a rewrite of Confessions of an Economic Hitman.

I highly recommend that book over this. Confessions of an Economic Hitman is one of the most important books ever written to explain how the world really, really works.

The author is one of the guys who really did the stuff that makes other nations refer to us as "Damn Yankees." Author Perkins had his feet on the ground and tells us the words and daily activities he used to break the economies of many contries around the world.

He was there during the Arab Embargo in the early 1970s and was helpful in solving that problem. The solution is astonishing even today.

One of the best books I ever listened to, even though it is not about mellifluous prose or any literary devices. It is even better than Confessions of an Economic Hitman. Read this today and get your eyes opened. Once you know what really goes on you can not go back to your illusions.

As a left leaning liberal, I found this book interesting, there are some truth in the book, such as the negative effect of US agricultural subsidy on African farmers and the length US goes to for national interest, however, the book ran away with accusation with clandestine operations that made James Bonds seem like angels of moderation. I agree with his moral conclusion, but for a academic polemic, it needs more substantiated proof.

Adorably out of touch

A few dozen "that happened" stories punctuated by endless, endless platitudes. There's nothing of substance here you haven't heard before, elsewhere, or better. At its best, it's nostalgic trip through 90s-era leftism, at its worst, a dull slog through the author's ego that offers nothing timely, relevant, or interesting.

As with his other books Perkins discribes how uncontrolled corporate power backed up by CIA and military have created an economic empire. Repeats many of the themes of confessions of an economic hitman. Whats new here is suggestion about what we can do to change the ssytem and what has been done by NGO's etc. I think Oliver Stone could combine the books and make a worthwhile movie.

Everyone in America should read this book. Changed the way I fundamentally looked at things. Whether your conservative or liberal this book has value to what America has been and may be.

I am not exactly sure why Mr. Perkins found it necessary to write this volume. His Economic Hitman book pretty much covered everything he talked about here. There was a spattering of additions from a couple of outside people, whom are rarely, if ever, identified. There are a couple of extra stories, but if you read/listened to his previous book you are not much surprised by anything offered here.
One tip though, high class Filipino prostitutes in Indonesia are not geisha...they may call themselves geisha, but they are better explained as high class prostitutes. My friends here in Japan were quite confused when I talked to them about that passage.

a must read for truth seekers

If you want more after reading confessions of economic hitman then this is it! He tells the same stories but with more details... John reveals how the decisions we make in the 🇺🇸 affects the world. Literally covers each continent!

The ramblings of a fantasist

A rehashing of his first book and offers nothing new, aside from even more of his environmentalism prescription. When you ignore that, your left with fragments of reality sandwiching more of his tales. The tales wouldn't be so bad if they appeared in a fictional novel, but his insistence they are fact is laughable. Even without the aforementioned points, his myopic view of history alone leaves me aghast.