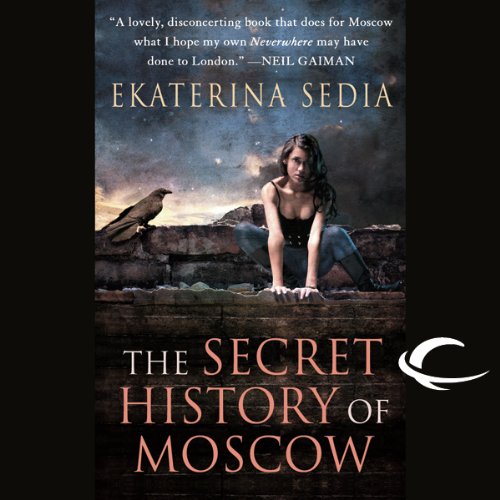 The Secret History of Moscow

The Secret History of Moscow

Every city contains secret places. Moscow in the tumultuous 1990s is no different, its citizens seeking safety in a world below the streets - a dark, cavernous world of magic, weeping trees, and albino jackdaws, where exiled pagan deities and faery-tale creatures whisper strange tales to those who would listen.

Galina is a young woman caught, like her contemporaries, in the seeming lawlessness of the new Russia. In the midst of this chaos, her sister Maria turns into a jackdaw and flies away - prompting Galina to join Yakov, a policeman investigating a rash of recent disappearances. Their search will take them to the underground realm of hidden truths and archetypes, to find themselves caught between reality and myth, past and present, honor and betrayal... the secret history of Moscow.

"A lovely, disconcerting book that does for Moscow what I hope my own Neverwhere may have done to London...the prose and the atmosphere is beautiful and decaying, and everyting's greyy with astonishing little bursts of unforgettable colour...deep, dark, remarkable stuff." (Neil Gaiman)
"Sedia's beautifully nuanced prose delivers both a uniquely enchanting fantasy and a thoughtful allegory that probes the Russian national psyche." ( Booklist)

Almost but not quite...

This book introduced me to the mythical Russian figures but failed to connect me to the myths and landscape of Moscow in as meaningful way as I had hoped. The narrator did well changing for characters but I found her voice as the main character was flat and gloomy. The story was also gloomy and I feel it could have had more sparkle if I knew more about the myths. I did listen to the whole story and it did resolve in a satisfactory way. I suppose it did reflect the beaten quality of the Russian people that I have witnessed in immigrants. I'll let you know when I get back from Moscow!

A World Exists Below Moscow

An ingenious twist on traditional urban fantasies introduces listeners to a world below Moscow that is populated by lost souls and creatures from Russian folklore. People are turning into crows, and there's a connection between the underworld and these bizarre happenings. While the main characters were not particularly likeable, the ones from folklore tales like Koschey the Deathless and Zemun the Celestial Cow more than made up for that. The narrator did an adequate job and I think it may have been a difficult book to narrate because of the writing style of the author. The entire work has a melancholy feel and the ending fits the story perfectly, which is what made this a very satisfying listen.

This narrator seems to have gotten bizarre direction. There are crazy long pauses after every line of dialogue. Someone speaks and then several seconds later you hear, "......she said," over and over again with each and every line. And they seem to have edited out every breath the narrator takes so that she sounds like a robot who does not require air to speak. You can hear the strange silences created where every breath should be. She also does a terrible job of male voices, and older male voices are just intolerable, ludicrous, like she's doing the big bad wolf: "I'll huff, and I'll puff.. and break my larynx!" It is a book well worth reading, but I could not make it through that narrator.

The only reason I gave it 1 star is because there was no option available for a negative star rating.