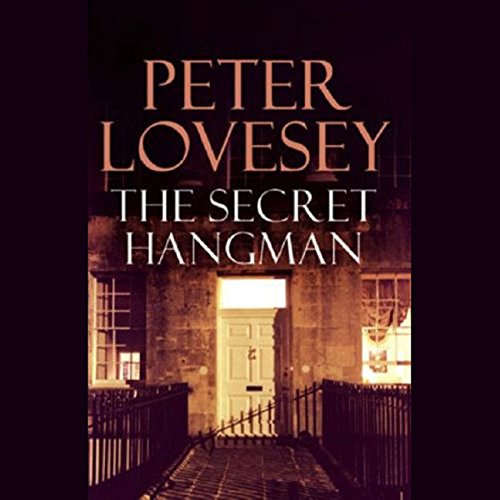 By: Peter Lovesey
Narrated by: Christopher Scott
Try for $0.00

Peter Diamond, the Bath detective, is having woman trouble. His boss wants him to find a missing person, the daughter of one of her friends in the choir. Another woman, who calls herself his secret admirer, wants to set up a meeting in a local pub. Then there is sexy Ingeborg Smith, the ex-journalist detective constable, distracting the murder squad from their duties. Murder is suspected when a woman's body is found hanging from a playground swing in Sydney Gardens and a suspicious second ligature mark is found around her neck. As Diamond investigates the victim's colourful past, more hangings are discovered. And soon he is certain that a secret hangman is at work in the city.
©2007 Peter Lovesey (P)2007 Soundings

"[A] master of the classic puzzle." (The New York Times Book Review)
"Lovesey's delicate balance of humor and suspense [is] one of the delights of contemporary crime fiction." (The Wall Street Journal)
"A master storyteller." (Kirkus Reviews)

What listeners say about The Secret Hangman

Despite the predictability of some elements of the plot I enjoyed the book. Certainly very well read, but also reasonable character development, some reasonable elements of humor and some ideas developed. Worth a listen and I am almost over the line to listening to another by the same author

I've enjoyed several of Peter Lovesey's Inspector Daimond novels and was not disappointed by this one. It has all the hall-marks of detective fiction: carefully planned murders, a series of red herrings, a definite motive for the killings revealed near the end of the book and lots of tensions between the members of the police force. Diamond the main character is a bluff, no-nonsense detective with a sad past (no surprise there!) who has a difficult relationship with his boss who is a bit of caricature of an irritable, bossy female who tries to take the credit for successful operations. Despite these character cliches it is a gripping story that keeps you listening.

A really enjoyable book. The characters seemed very real and human, and the daily life at the police station convincing. Although I do not know Bath as a city, the descriptions indicated that the author had intimate knowledge of the place, and made one want to explore for oneself!

The plot was original and fascinating, with plenty of twists and turns to keep up one's interest. Beautifully narrated. Definitely recommended.

This story is not up to the usual high standard of the previous Peter Diamond series. Good plot but drags and the reader is not great.

I've been working my way through all the Peter Lovesey books on Audible. I generally find them enjoyable, even though many include some plot elements that require a greater than usual suspension of disbelief.

Unfortunately, this one is just too far-fetched from start to finish. Christopher Scott is one of the better readers of Lovesey, but for some reason, all of his readers manage to make the females sound like drag queens to a greater or lesser extent.

This one started out ok but ended up totally unbelievable. A waste of a credit.

I absolutely love these detective stories. Peter Diamond is a wonderful character and the plots are great, lots of details and twists. I personally also like the lack of gratuitous violence. My ONLY complaint is the narration. I am working my way through the whole Peter Diamon series and I am on my third narrator. Diamond's characterisation and accent, and those of his colleagues change all the time and I find it slightly confusing and not a little irritating. Such a shame as Peter Lovesey's novels are excellent.

If Michael Tudor Barnes is a 10, and Peter Wickham is a 7, then Christopher Scott would be a 3.
One of the characters in this book is called Ingeborg - and when the Diamond character shortens her name, he say Inge (Inger). However when the narrator is telling the story, he refers to her as Ing-borg.
This blatant mispronunciation grated so badly, it came close to ruining the book for me.

Another adventure with the wonderful Peter Diamond

I have been following Peter Diamond through his various trials and tribulations and this book did not disappoint. The curmudgeonly detective even found time for romance! I enjoyed this book and look forward to finding out more of his life and times in the next one.

I enjoyed this book. It was well read with an interesting plot and it kept me interested throughout.

Enjoyed listening to the story but found the main character was very. Hard on is team