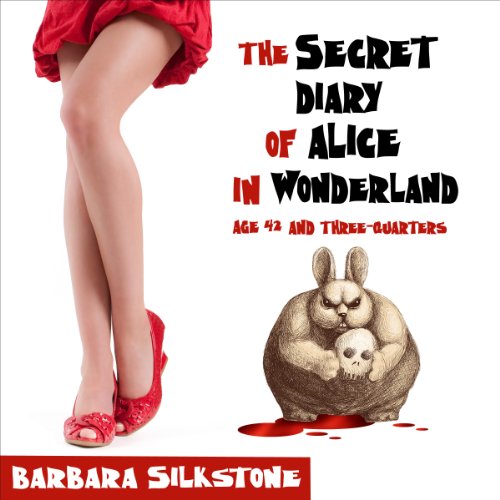 The Secret Diary of Alice in Wonderland

By: Barbara Silkstone
Narrated by: Karen Krause
Try for $0.00

Alice Harte's life is falling apart. Her boss at the real estate firm where she works is a litigious and murderous man with ties to the Mafia in Florida. She knows he has literally beheaded someone in the past.

Her whole life she has dreamed of living in England and meeting a man similar to John Cleese. In an attempt to start breaking away from her boss who is threatening her with a lawsuit, she flies to England to meet Nigel Channing, who has been charming her through e-mails and phone calls.

As her life in Miami falls apart, with mobsters and a pending fraud lawsuit, her romantic savior in England looks more and more tarnished by the hour. And then she stumbles across a beheaded mob boss. How will she ever keep her head and win the lawsuit? And what about love?

Praise for The Secret Diary of Alice in Wonderland, Age 42 and Three-Quarters: "This wacky book is a delight. The author does a great job in providing cutting edge entertainment, weaving it all in a tall tale and at the same time making the farcical plausible. The fun, the play on words, the punastic delights run wild and the story hops on down the bloody, fishy, and stinky bunny trail. Well done and well worth your time to read this book." (The Shadow)

"This book was a fun, fast paced read and almost as strange as the original AIW, in a good way. The climactic scenes in the courtroom were fascinating. The many threads of the story pulled together at the end came together smoothly and I really enjoyed it. I loved watching the courtroom scenes play out. Ohhh...the dirty little secrets all coming to light and taking out the bad guys one by one... great!" (Red Adept Reviews)

"I love this story as much for the comedy as I do for the perfect characterization. These characters are just as mad and scary as the original Lewis Carroll characters. The humor is clean and perfectly in context with the characters delivering it, for example, Nigel Channing's British humor is very John Cleese and Kit the Drag Queen's take down of one of the corrupt lawyers is hilarious, a perfect 'Priscilla, Queen of the Desert' moment. This is a highly polished story and the author's writing style is very easy to read and enjoy, which makes this the perfect book to curl up with on a rainy afternoon." (Mandy Ward, Author)

Barbara Silkstone is the best-selling author of The Secret Diary of Alice in Wonderland, Age 42 and Three-Quarters; Wendy and the Lost Boys; London Broil; The Adventures of a Love Investigator; 527 Naked Men and One Woman; and Zo White and the Seven Morphs. Silkstone's writing has been described as ";perfectly paced and pitched - shades of Janet Evanovich and Carl Hiaasen without seeming remotely derivative. Fast moving action that shoots from the hip with bullet-proof characterization."

This book contains a bonus excerpt from Wendy and the Lost Boys, the second book in the "Fractured Fairy Tales" series by Silkstone.

What listeners say about The Secret Diary of Alice in Wonderland

"I am loving the audio books by Barbara Silkstone.
Alice Hart finds herself in all sorts of trouble, after she thinks she is meeting the man of her dreams online.
She is so unhappy with her job, and wants so badly to get away from her awful boss, but he has no intentions of letting her go. He has all kinds of thugs around to do his dirty work. From judges to crazy, obnoxious women.
Alice thinks she is going to England to meet Nigal, and thats where the craziness begins. They are in and out of hotels
every day, like someone is following them, and it turns out there is....
Then upon returning home it does not get any better. Alice is being sued by her boss. There are people getting killed,
bad men showing up at her door, corrupt lawyers, and even worse judges. Alice ends up being her own lawyer. Will she figure out whats going on before it's too late???
This book was so much fun.
"

The Secret Diary of Alice in Wonderland Aged 42 and Three Quarters is clever, funny, solidly voiced and presents a modern-day twist for Alice all grown up. The second of Silkstone’s titles that I have reviewed in Audio form, the narration provided by Karen Krouse managed to voice Alice with panache and provided an interesting twist with accented wise guys, and smooth delivery of the written words.

The story cleverly places our Alice, a slightly neurotic and germ phobic woman with a sassy sense of humor, a mouth that is engaged often before her brain and a penchant for all things British. She works in real estate for a ‘connected’ man who is developing luxury properties all over south Florida. Unfortunately, while Alice wants to quit, the boss won’t let her, and there are others who expect she will practice some workplace espionage and then testify at a later date.

The story just starts at a level 3 and ramps up from there, with references that are clever plays on the characters and references from the original Alice stories, a few I didn’t realize just how clever until a few sentences later. With several free-falls down the rabbit hole, only to emerge with another plot twist and more action, this story alternated between laugh out loud funny to just plain amusing. And Alice will never be the same again.

If you could sum up The Secret Diary of Alice in Wonderland in three words, what would they be?

I love listening to audiobooks! This story is just my cup of tea... my workouts went by too fast! Barbara Silkstone has a knack for placing the most normal, lovable characters in the most bizarre situations.

There are levels to Barbara's humor; if you've read Lewis Carroll's work than 'even better', you will grasp some of the nuances meant to turn a smile. If not, no matter! You are sure to relate to what it would be like trying to represent yourself in a court of law, when the link on your chain bracelet becomes stuck in your pantyhose and it's time to approach the bench. I almost peed my pants!

What other book might you compare The Secret Diary of Alice in Wonderland to and why?

I find her humor in each story she writes. Always a bright spot in my life, when a new one is published!

As a part-time narrator, I learn so much from others in the profession and especially enjoyed Karen's sense of timing. Good job!

This is a bit of a zany tale with characters based on Alice in Wonderland. The narrator was superb and added to the laugh out loud enjoyment of many of the crazier situations in the book.

Karen Krause does an excellent job on the narration. Many pats on the back there. Lots of texture, lots of nuance. It's difficult to narrate that many opposite gender characters, but she handles it well.

I think some of the book was lost on me for not knowing all the details of the original Alice in Wonderland. It probably resonates more with AIW aficionados. But having said that, there are some very good payoffs in the final chapters for things that I had been wondering about for most of the book. And there's a good tension toward the end as Alice finds the line between what is happening in the real world and what isn't. I liked it.

What made the experience of listening to The Secret Diary of Alice in Wonderland the most enjoyable?

I really enjoyed the performance by Karen Krause. She has a nice voice and did well with the different accents. She had a way of bringing me into the story.

Alice is the main character so she is most prevalent. Alice is very likable and I was rooting for her to clear her name, and to fall in love.

Which character – as performed by Karen Krause – was your favorite?

Karen did a great job as Nigel. I think as far as performance goes Nigel was my favorite character as performed by Karen Krause.

I really liked the travel through Europe.

Great overall performance. Fun story. Very easy to get back into the story if away from it for a few days.

annoying voice on the narrator

It started out somewhat interesting, and went downhill. I didn't find it funny at all.

Alice is all grown up

oh most definitely. I've always loved the Alice in Wonderland story. I love that this books bring it to real life and that Alice is far less than perfect!

Wanted to yes, but it took me two days

The characters were funny. I could see myself being Alice. I also truly liked that Nigel wasnt supermodel perfect looking, made it seem more real.

There were things about the story that didn't quite work for me - such as the whole Alice in Wonderland tie-ins. I can't say what would have fixed this issue. More references? Fewer? Consistant-er? And then there was the Xanax aspect. Again, it didn't really work.

And yet... I really wanted to know what happened next and hesitated to pluck out my earbuds when interruptions happened. This is why I gave the story four stars instead of three.

The narrator, Karen Krause, does a wonderful job with her character voices. She made me really want to strangle that Judge. However, I found her first person narrative a bit choppy and lacking in the humor I found in her other voices.

Overall, it was a fun few hours. I'd listen to it again.