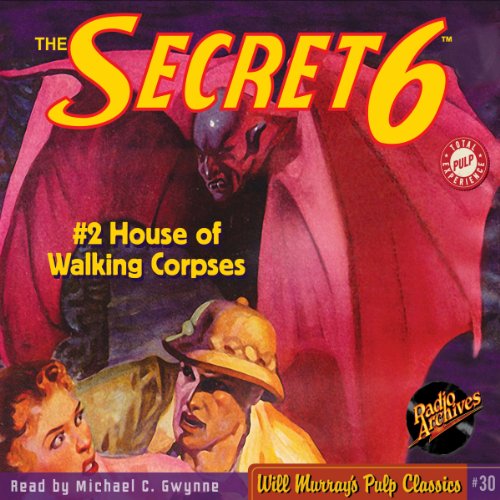 Popular Publications publisher Harry Steeger and writer Robert J. Hogan had scored a hit with G-8 and His Battle Aces in 1933. A year later, they put their heads together and concocted a crime-suspense series with a fantasy flare. They called it The Secret 6!

The premise was simple. Framed for the crimes of the diabolical Red Shadow, a mystery man with a haunted past calling himself King breaks out of the Death House. Scouring the Underworld, King assembles a team of shadowy specialists who dedicate themselves to hunting down The Red Shadow. Once he was disposed of, the super-sleuth sextet went on the tackle malevolent menaces in the I Love a Mystery vein.

This new crime-busting organization consisted of King, The Doctor, The Professor, The Key, The Bishop, Shakespeare and the Zulu warrior known as Luga. They are backed by a small army of unsavory underworld informers ranging from Legs Larkin to Flo the Fleecer.

Only four issues of The Secret 6 were ever published. But what a glorious run! "The Red Shadow" was followed by "House of Walking Corpses," "The Monster Murders" and "The Golden Alligator." Each succeeding novel was more fantastic than the one before.

For their second exploit, The Secret 6 go up against a Mayan curse that turns members of the wealthy Waldorff clan into Living Dead Men. But that's only the start of the wild trail that takes the fighting 6 from Long Island to the Mayan-dominated jungles of Yucatan and a rousing battle with the sinister Bat-Man and his undead legions at the Temple of Azrah. Will The Secret 6 triumph––or will Mayan vengeance make it their tomb?

What listeners say about The Secret 6, House of Walking Corpses - #2 November 1934