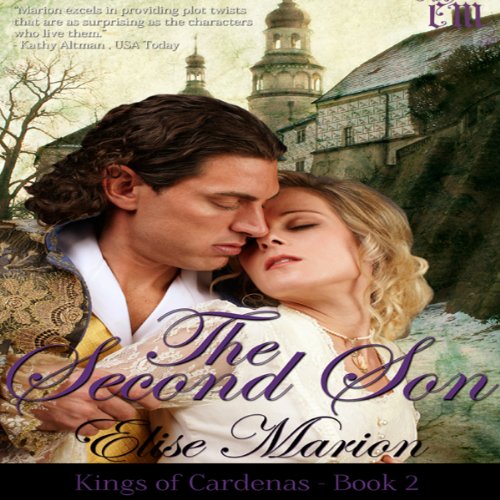 By: Elise Marion
Narrated by: Piers Gibbon
Try for $0.00

Set in a world of kings and queens, palaces and royal courts, warriors and battlefields, book two of Elise Marion’s Kings of Cardenas family saga continues with a story of love, passion, and destiny.

Princess Isabelle has spent her entire life bending to the will of those who have planned her life out for her. Sent into hiding when she was just an infant to protect her from the rebellion in her own homeland, Barony, she was betrothed to Prince Lionus from the neighboring province Cardenas when she was just an infant. Despite the forced engagement, Isabelle has loved Lionus all of her life. When a devious plot against the royal family results in her husband’s death, Isabelle is left with a broken heart and an uncertain future. Only one year after his brutal murder, she has no choice but to choose a new husband and return to her homeland to take her place as queen and repair the war-torn land.

Prince Serge has secretly loved Princess Isabelle his entire life. The fact that she was promised to his brother has brought him no end of pain and suffering. The second born son of the king, he has resigned himself to a life of living in his brother’s shadow. After a deadly plot against the royal family leaves Serge hovering on the edge of death, he awakens from a coma one year later to find that his older brother has died and his youngest brother has taken the throne in his stead. His future is now uncertain, but Serge is determined to find his own way in the world now that he has been given the gift of new life. When it is suggested that Princess Isabelle take him as her husband, Serge begins to hope that all of his most secret dreams will now come true.

Despite unexpected spark of desire between them, Isabelle resists the new path her heart is taking as she clings desperately to Lionus’ memory. Can Isabelle let go of her past and learn to love Serge in return, or is she destined to a life tied to one man as she mourns the other?

Once united as king and queen, Isabelle and Serge face the monumental task of rebuilding her broken homeland and rescuing it from the clutches of those seeking to destroy it. Can the pampered princess find the strength to stand beside her husband and fight for her people? Will the second son of a king finally get the chance to prove his worth? Can either of them learn to let go of the ghosts of the past and find love?

That's the way the cake - and the wedding - crumbles!

What listeners say about The Second Son

appreciated the depth and growth of the characters

The second in the Kings of Cardenas series, The Second Son picks up and continues the story established in The Third Son. While you aren’t required to read or listen to these books in order, some of the subtleties that establish the relationships and history are difficult to provide without retelling large swathes of text, so I would recommend you take these in order.

Set in a fantasy world, yet informed with references appropriate to the mid 1800’s Europe including clothing, societal expectations and the courts of royal houses, Marion has created a lovely world full of references, characters and emotions that will captivate and intrigue. The old king is dead, and Damien, the third son, has ascended to the throne. His remaining brother, Serge, has been ill, comatose with little hope for his recovery for the past year. And yet, he awakes, and sends his brother, Damien, into a landslide of guilt.

Isabelle was under the protection of the Cardenas royal house since early childhood and the demise of her parents’ reign in Barony. Groomed to marry the first son, her marriage was cut short by her husband, the crown prince’s death. She has been in mourning, yet comfortable and cared for in the Cardenas royal household, while she would like to return to rule her own country of Barony, she knows that it is little more than a dream.

I couldn’t help but feel for both Serge and Isabelle: she is willing and trained to rule, and to take the mantle of her country would be the logical step. Although, she was without a king: a situation that the Privy Council needs her to rectify. Logically, Serge is the correct choice. His experience both in upbringing as the spare for the heir gave him unique perspective on the requirements for a king, while his military experience, bearing and the respect gained by his men would make him a formidable opponent for the uprising rebels in Barony. He has always had his eye on Isabelle, and when he finds her reactions to him are as steamy and sensual as he had hoped, he has lost his heart.

Isabelle is wonderful, if a bit immature. Still in love with her first husband, her choice of Serge was made with her head, not her heart: unfortunately she refuses to see that she too is in love with him, even as her grief for Lionus is raw. There is a core of steel in there however, with a genuine will to do the best for her people that she can. Still the twists and turns of the ones who would bring Cardenas to heel are moving through the story, and Isabelle needs to learn to find her own way after wounding Serge deeply with her revelation.

We also get an introduction to the Lady Knights of Barony, as Isabelle is determined to learn to fight and protect herself, and be of use to her people. I think I appreciated the depth and growth of the characters and story more than in the first book: Isabelle was hard to not like. Having decisions made for her most of her life, it was fun to see her gain confidence in her own abilities, and taking charge of her life, even as she is mere putty in Serge’s arms. Steamy and sexy, with plenty of action, emotion and appearances from secondary characters that we already know, and the moments with the Lady Knights add some ‘girl power’ to the story as Isabelle manages to find her own way in a life that is far different than the one she pictured only a few years earlier.

Narration for this story is provided by Piers Gibbons, and his voice, while not overextending in pace, tone or affectation, manages to provide a clear delineation between characters, while adding emotive emphasis that is pleasing to the ear. His smooth diction with crisp enunciation and seamless delivery enhance the words on the page, and do not distract with unnecessary flourishes.

I received an AudioBook copy from the author for purpose of honest review. I was not compensated for this review: all conclusions are my own responsibility.

Super second book in this series!

Would you listen to The Second Son again? Why?

I would listen to The Second Son again. I got totally swept back into Cardenas listening to this second book.

I loved Serge in The Third Son, seeing so much of him and his love and devotion for Isabella in this book is so sweet! Being the Second Son Serge has resigned himself to the fact that the woman he loves, Isabella, is set to marry his oldest brother. After a tragic meeting on the road leaves Serge in a coma, he wakes to find that one brother is dead and the other is now king. This leaves his Isabella free for him to try and prove that he is the man for her,

Have you listened to any of Piers Gibbon’s other performances before? How does this one compare?

I had not listened to anything else narrated by Piers Gibbon, I liked the sound of his voice and the rhythm and pacing that the book was read in.

One of the most heart breaking yet, heart warming stories that you will ever see,

I really enjoy this series by Elise Marion, and I cannot wait to listen to more of her books!