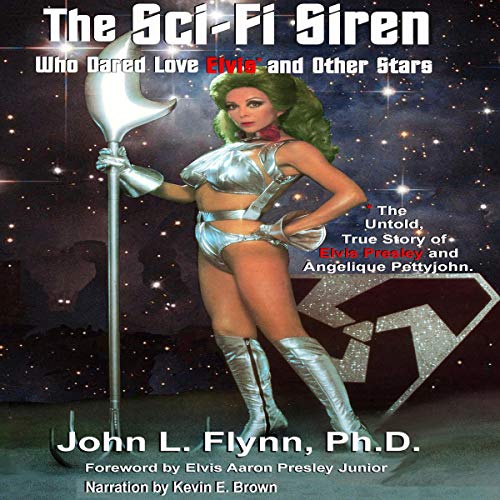 The Sci-Fi Siren Who Dared Love Elvis and Other Stars

Angelique Pettyjohn (1943-1992) was groomed and pampered to be the next Marilyn Monroe by the studio system. But on her way to stardom, she took a slight detour and became an icon in her own right, beloved by millions of fans worldwide. This is the incredible, true-life story of "the girl in the silver bikini" who dared to love Elvis Presley and give the King of Rock-n-Roll his only son.

She also taught Captain Kirk on Star Trek how to make love to alien women, outsmarted Secret Agent Maxwell Smart, spied on the Girl from U.N.C.L.E., came between TV's Batman and Robin, put the sting back in the Green Hornet, showed partner Bruce Lee (as Kato) a few fast moves, headlined several sci-fi movies as an unforgettably sexy siren, was picked up as a hooker on the top-rated Hill Street Blues, and proved that women over 40 were shagadelic, baby!

She was also a Las Vegas showgirl, exotic dancer, model, femme fatale, scream queen, comedian, Playboy pin-up, suburban housewife, and friend. During her 30-year career in show business, Angelique Pettyjohn always lit up the stage or screen with her splashy personality and sexy good looks. She dated most of Hollywood's leading men, and if her sex diary ever surfaced, there would be plenty of red faces in Tinsel Town.

I met Angelique at a Star Trek convention in 1982, and during the last 10 years of her life, we developed a truly one-of-a-kind friendship. We became inseparable, and there wasn't a thing I would not have done for her. She asked me one final favor, while she lay dying; she asked me to tell her story, warts and all. This book, which has taken 28 years of exhaustive research, is my love letter to Angelique Pettyjohn, her story of tragedy and triumph in show business.